The project aimed to increase the use of biogas in Baltic Sea Region city buses by helping cities to set up biogas bus introduction strategies. The project's extension phase sought to improve the market position of biogas buses by supporting biogas as a transport fuel and making biogas buses more energy efficient with hybrid ‘drivetrains’ and eco-driving technology. 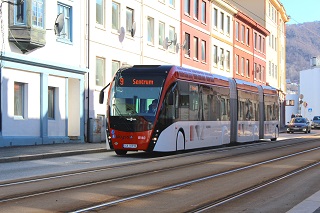 " Thanks to the EU financial support we have been able to demonstrate that biogas buses are the natural choice for sustainable urban transport. "

A transport plan including biogas buses was formulated for Tartu, Estonia and the city's first compressed gas filling station was built. During the first three years of the project the number of biogas buses in the partner cities doubled from 300 to 600. Tartu is planning to run city buses exclusively on biogas as of 2017.

The second phase featured investment in different types of hybrid biogas-electric buses which are now running in daily traffic in Bergen, Norway and Västerås, Sweden. Eco-driving systems were installed in buses in Bergen, Kaunas in Lithuania, and Rzeszów and Tychy in Poland and used for training on fuel efficient driving. A mobile installation was built in Niepołomice in Poland to upgrade raw biogas from landfill to transport fuel quality and subsequently tested in buses.

The final report evaluates the investments and provides socio-environmental-economic analysis of biogas production and upgrading for fuel.

Both phases focused on communication and stakeholder relations, producing a regularly updated website, newsletters and fact sheets. Information on the Baltic Biogas Bus, its findings, best practices of partners, and biogas production was presented at project seminars and international public events. The project was also featured in magazines and newspapers.

Total investment for the projects “Baltic Biogas Bus” and “More Baltic Biogas Bus” is EUR 7 405 670, of which the EU’s European Regional Development Fund is contributing EUR 4 565 627 from the Baltic Sea Region Programme for the 2007 to 2013 programming period.