Polish research company Alcor has developed innovative protective mats that limit the damaging effect of de-icing salt on green areas near roads, pavements and squares. The system is made entirely from recycled and biodegradable materials and capable of recycling used road salt, while decreasing soil salinity in the process. 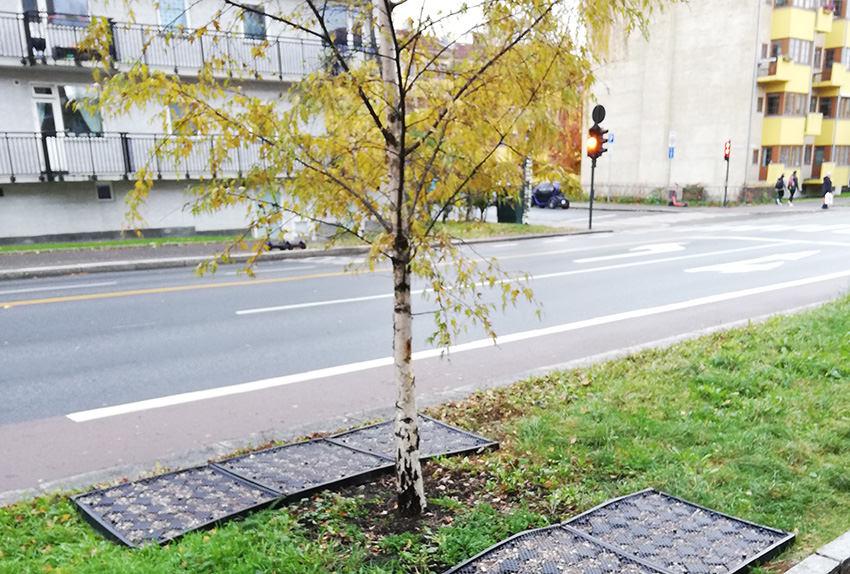 The desalination mats being tested in Oslo during the winter of 2020/2021. ©Research and Development Centre, Alcor Ltd (2020)

" Our company developed technologies for the production of desalination mats, to protect trees planted along roads with heavy traffic. Research in laboratory conditions shows that the system withdraws up to 2 kg of salt from under one tree. Thanks to the support of EU funds, a dedicated thermoforming machine was purchased to enable testing. "

The desalination technology reconciles road safety in winter with the protection of plants, trees and even crops against the detrimental effect of salt. The lightweight, protective mats have an internal, biodegradable absorber that prevents road salt from penetrating the soil.

The mats are made of recycled materials and can be reused after each winter. The internal absorber is entirely made of dried Salix viminalis wood chips, a species of willow also known as basket willow.

Completely biodegradable, the chips absorb and retain large amounts of water, making them effective against melting ice and snow. After winter, the chips can be desalinated and composted, and the film can be re-filled with a new absorber. This makes the project perfect for a circular, climate-neutral economy.

While the salt still does its job of melting ice and snow, the protective films keep it away from places where it does more harm than good. In doing so, the technology is keeping soil salinity below the point where it could cause plant stress or damage. The mats further prevent salt from entering groundwater, streams, lakes and sewers.

While the salt is retained in the mats, excess, low saline-level water is allowed to flow through it into the ground. The mats can conserve over 2 kg of salt per tree. As such, the project is protecting small green ecosystems while improving the quality of the water around the areas where the technology is applied.

A positive impact at home and abroad

Both the inhabitants and authorities of the cities where the system was tested were enthusiastic about the technology’s positive impact on the environment. The mats have been recognised by both national and international environmental experts and institutes.

The project has led to a collaboration with the W. Szafer Institute of Botany of the Polish Academy of Sciences in Krakow. Staff and doctoral students at the institute are comparing the health of protected and unprotected plants to further adjust the parameters of the system.

Research is being conducted to measure the impact of the mats on irrigated soils and whether they can be used on a larger scale to protect areas like green belts along highways.

The Stockholm Road Traffic Office has expressed its interest in testing the technology on Swedish soil. Milford, a Danish company that provides green solutions to enhance urban areas in Scandinavia, is awaiting samples of the mats for testing.

At present, the technology is being tested in real conditions in Oslo, Norway. The protection covers the birches (Betula pendula) growing in the green belt in the city centre, where the winter salt load is significant.

Alcor has obtained a patent for its developed technology with the Polish Patent bureau.

Total investment for the project “Development of a Production Technology of a Film for Protective Trays of Odsalax System” is EUR 353 788, with the EU’s European Regional Development Fund contributing EUR 263 444 through the “Human Resources” Operational Programme for the 2014-2020 programming period. The investment falls under the priority “Support to enterprises and innovation”.