A team of IT specialists based in eastern Poland have developed an augmented reality game that provides hours of fun while teaching players about Slavic culture and mythology. Slavic Monsters is a geolocation game which is available on iOS and Android smart phones. Players encounter and battle mythical creatures in the real-world locations where they would have appeared according to local legend. The game uses real landmarks as players explore the region and its culture while enjoying the game. 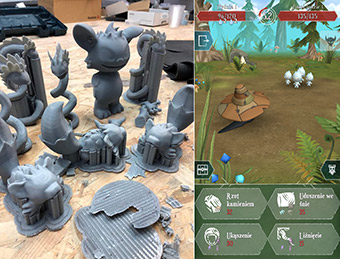 " Mythologies are a source of amazing cultural content – we want them to become as popular as fictional bestiary are. We hope that one day every culture can bring their mythology alive through our game. "

The team behind the ‘Slavic mythology in augmented reality’ project deploys the latest technologies to make the game as immersive as possible. Players can use virtual reality goggles to enter and play. Advanced use of spatial data means that the game’s objects can be adjusted to their surroundings, making it possible to place creatures anywhere in the world. In addition, genetic algorithms were used to complete automated simulations of thousands of battles.

Around 170 mythical creatures have been rendered for the game from Slavic culture as well as from Greek, Nordic and Celtic myths. Players can, for example, encounter the Klobuk demon in the Polish city of Olsztyn or the Wawel dragon in Krakow. The project has also produced a number of toys and card games to complement the game.

This is the first ever geolocation game to be based on Slavic mythology. In Olsztyn, home of the game’s originators, more than 40 000 people learned more about local culture after trying out the game or by visiting the project’s related publicity shows and workshops. Local press, television and radio have also featured the game. Several thousand people took part in testing Slavic Monsters, and the project team estimate that the game could end up being played by more than 500 000 people.

The game is expected to be used as a promotional tool by Polish cities to attract tourists to the area. For example, gamers may be attracted to Wroclaw in western Poland to find and catch dwarves, but they will stay to enjoy what the city has to offer in terms of other entertainment and culture.

While creating the game, the project received help and support from a number of technological partners including Google, Deutsche Telekom and Microsoft.

Total investment for the project “Slavic mythology in augmented reality” is EUR 218 309, with the EU’s European Regional Development Fund contributing EUR 185 563 through the “Eastern Poland” Operational Programme for the 2014-2020 programming period. The investment falls under the priority “Starting platforms for new ideas”.

Warmińsko-Mazurskie View programmes for this region