Preserving the history of Cyprus and the South Aegean through digitisation

As society becomes increasingly digital, it becomes more and more important that historic materials be made available online. That’s why Cyprus and the Greek island of Rhodes have put over 500 hours of audio-visual, musical, and written materials into a digital archive accessible to anyone. 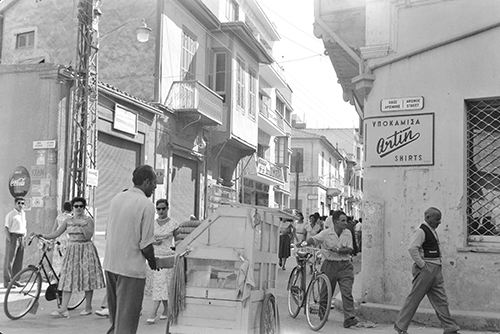 Road of Nicosia (Lefkosia), the capital of Cyprus, during British colonial rule in the 1950s. ©Photo Department, Press and Information Office, Republic of Cyprus (1955-59)

" The digitised material derived from the Digital Herodotus II project is used for educational purposes, but also in academic research. Additionally, individuals research the digital collections, driven by their interest in history and culture, specific events or, in general, by their wish to reconnect with their past. The interest shown by such individuals to access the material is unprecedented. "

Researchers with the EU-funded Digital Herodotus II project are digitising material of unique historic value to the Cyprus and South Aegean (Rhodes) region. To date, over 500 hours of audio-visual, print, and recorded music have been digitally archived and made available to the public – and the response has been overwhelming.

The main objective of the project is to preserve material of historical value, not only to Cyprus and Greece, but also to European society. To accomplish this, project coordinators, working alongside public broadcasters, newspaper publishers, and other stakeholders, digitised 450 hours of audio-visual material (from 1955 – 1990), 50 hours of previously unpublished musical materials (1955 – 1974), and 500 000 pages of the Cyprus Press (1878 – today), as well as other newspapers from the island of Rhodes (1915 – 2006). It took a team of 27 people 2.5 years to achieve this.

Benefits to the public – and beyond

Once digitised and organised, all collected material was made available to the public, mainly through the project’s web platform (www.digital-herodotus.eu). In addition to the general public, the site is also available to the scientific community, researchers, universities, teachers, and the disabled.

The web platform currently hosts over 10 000 audio-visual and musical content files, and more are added daily. The site receives consistent traffic, including visits from over 60 different countries in both Europe and beyond. The website won the 2019 Gold Award at the Digital Marketing Awards.

Project coordinators are now working to connect the content to the Europeana digital library.