AdriaMORE: Protecting the Italian and Croatian shores of the Adriatic

The AdriaMORE project upgraded an existing platform for the monitoring and management of hydrometeorological risks such as storms or floods along the Adriatic coastline. Components to refine the system’s coverage for stretches in Italy and Croatia were added. Project activities included software development, installation of a wind profiler and acquisition of a firefighting vessel. 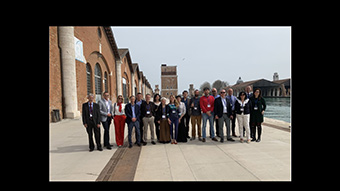 " With severe weather conditions expected to become increasingly frequent, AdriaMORE carried out activities that will help to mitigate the impact of extreme events on the territories and communities along the Adriatic coastline in Italy and Croatia. "

AdriaMORE focused on the accuracy and timing of extreme weather alerts, in a bid to improve the information available to civil protection agencies and other risk management stakeholders and thereby help protect lives and mitigate damage. To do so, it upgraded an existing integrated decision support system developed by ADRIARadnet and CapRadNet, two earlier EU-funded projects. These were backed by the Adriatic IPA (Instrument for Pre-Accession) Cross-border Cooperation Programme 2007-2013.

‘The platform is now capable of acquiring and processing meteorological radar data from systems with different features,’ says Paola Di Salvatore, who coordinated this project led by the regional government of the Abruzzo region. ‘Local civil protection services and authorities in areas where extreme weather events are expected can be alerted promptly.’

Particular attention in the project focused on factoring in the specificities and particular vulnerabilities of the coastal areas covered by AdriaMORE. Three further partners were involved in this collaborative endeavour: they included the county of Dubrovnik-Neretva in Croatia and the country’s Meteorological and Hydrological Service, along with the Italian Institute of Atmospheric Sciences and Climate. The Centre of Excellence of Telesensing of Environment and Model Prediction of Severe Events in L’Aquila contributed as the scientific implementing body on behalf of the lead partner.

Monitoring the risks, mitigating the impact…

Drawing on the combined expertise of the entities involved, AdriaMORE conducted a variety of research, innovation and technological development activities. It contributed both software and hardware components to the existing decision support system, which notably include:

Two pilot actions — respectively focused on the estuaries of the two rivers — were conducted to test the upgraded decision support system.

…of extreme weather events and floods

Further activity in the project focused on the installation of a wind profiler, which was set up in the area of Dubrovnik. This device will be used for monitoring and forecasting.

AdriaMORE, which ended in September 2019, funded the acquisition of a firefighting boat. This vessel will be used primarily for operations at sea and along the coastline near Dubrovnik, where it is moored. It could also be tasked with pollution-related interventions such as deploying floating dams.

Total investment for the project “Adriatic DSS exploitation for monitoring and risk management of coastal extreme weather and flooding (AdriaMORE)” is EUR 1 150 500, with the EU’s European Regional Development Fund contributing EUR 977 500 through the “Interreg V-A — Italy-Croatia” Programme for the 2014-2020 programming period. The investment falls under the priority “Climate change and risk prevention”.