This is an eight-yearly module, so the article

will be updated in the first quarter of 2026

In 2016, 77 % of young people in the EU did not change or were not willing to change their place of residence for a job.

In 2016, 54 % of young people in the EU did not work while studying for their highest completed qualification, with the largest rate of non-working students in Romania (91 %) and the smallest in Finland (8 %).

In 2016, 16 % of employed persons in the EU aged 15-34 reported that their current main job did not correspond to their level of education. 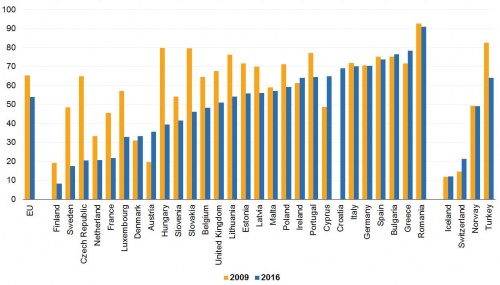 This article presents some findings from a survey on the situation of young people in the labour market[1]. The survey has a special focus on work based education, finding out in detail how different types of education correlate with, for instance, the employment rate and with quality of employment. Other topics which are covered are education/job mismatch, reasons for not completing qualifications or not continuing education, methods for finding a job, and being ready either to commute or to move residence in order to have or to find a job.

The Labour Force Survey ad hoc module 2016 targeted persons aged 15 to 34 years. This article will therefore exclusively analyse this age group. Figure 1 shows that important changes take place in this age span. Almost all 15 year olds are in education but outside the labour force (so neither having a job nor looking for or being available for one), whereas a very large majority of the 34 year olds are in employment and not in education. It also shows that the peak age for being both in education and having a job at the same time is 18 - 21, and that the number of unemployed persons is rather stable between the ages of 20 - 34.[2] 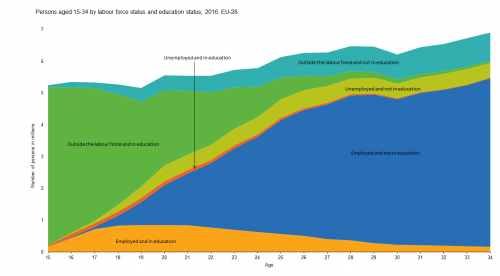 In the EU-28 in 2016, 77 % of young people did not change or would not be willing to change their place of residence for a job. Figure 2 shows that the willingness to move residence correlates somewhat with education level and strongly with status in employment (i.e. employed or unemployed). Among those who had a job at the time of the survey, 90 % had not changed their place of residence in order to get their current job. This 'did not move for the job' rate decreases with increased education level (93.2 % for low education, 84.6 % for high education) that is, persons with high education move residence for professional reasons more often than others. Among those who were unemployed at the time of the survey, 23 % of those with high education would change residence inside the country and 16 % would change residence inside the EU to get a job. The corresponding numbers for persons with medium level education and low level education were a bit lower, at 21.3 % (low education) and 20.4 % (medium education) for moving inside the country and at 11.3 % (medium education) and 10.2 % (low education) for moving to another EU country. People are more willing to change residence inside their countries than to move to another EU country for work purposes. 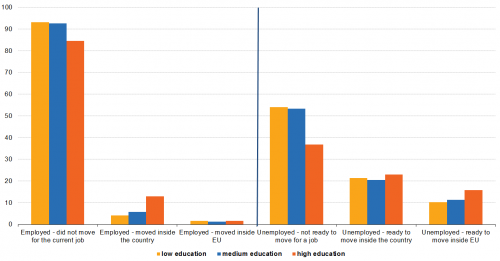 Regarding commuting, 76 % of young people in the EU-28 are not currently commuting or would not be willing to commute for longer than one hour each way between home and work. Among the EU Member States this rate was highest in the Netherlands (93%) and lowest in Italy (61%). Among all the countries covered by the survey the lowest rate was in Turkey (6%), meaning that practically all young people in Turkey are willing to travel at least one hour each way between home and work every day. 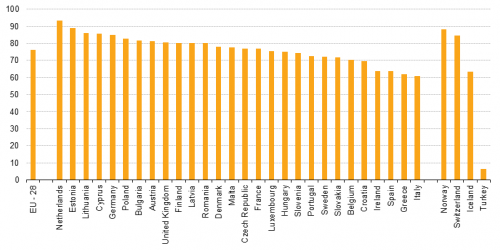 Half worked while studying

In 2016, 54 % of young people in the EU-28 did not work at all while studying for their highest completed qualification, neither paid nor unpaid. The largest rate of non-working students was in Romania (91 %) followed by Greece (78 %), Bulgaria (77 %) and Spain (74 %), while the smallest rates were in Finland (8 %) and Sweden (17 %). The 2009 and 2016 rates are not fully comparable due to slightly different definitions, [3] but it can be reasonably concluded that working while studying has become more widespread over time (Figure 4). In the EU the rate of young people not working while studying for their highest completed qualification decreased from 65 % (EU-27) in 2009 to 54 % (EU-28) in 2016.

Figure 5 : Young people by work experience while studying, 2016 (% of people aged 15-34 who had completed any formal education). Source: Eurostat (lfso_16workexp)

The employment rate was lower for people who did not work at all while studying for their highest completed qualification than for those who did (Figure 6).

Perhaps surprisingly, work-based learning (work as a structured part of the education) correlates with a lower employment rate than work experience outside the curriculum does, no matter the education level.

Quality of employment can be measured in many ways, three of which are presented in this article.

Figure 7 shows that persons with medium level vocational training are least subjected to short job tenures (defined here as less than one year), and furthermore that among these persons it is those with no work experience while in school that are in the best position, followed by those who had work based learning (i.e. work as a structured part of the curriculum). Persons with medium level general education are worst off on this indicator of short job tenures. It can therefore be reasonably concluded that the orientation of the education (general vs vocational) is more important than the length of the education (low vs medium vs high). There is no clear pattern coming from having had work experience or not. 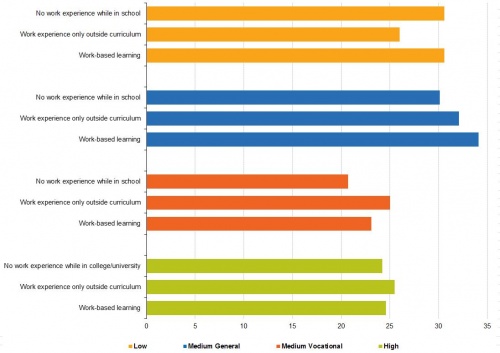 In Figure 8, which shows how many persons work during weekends, it can be seen that the length of the education is the best predictor for the indicator: those with low education are twice as likely to work during weekends as those with high education, and the persons with medium level education are in the middle. Having had work experience only outside the curriculum has some correlation with more weekend work, but the effect is not strong. 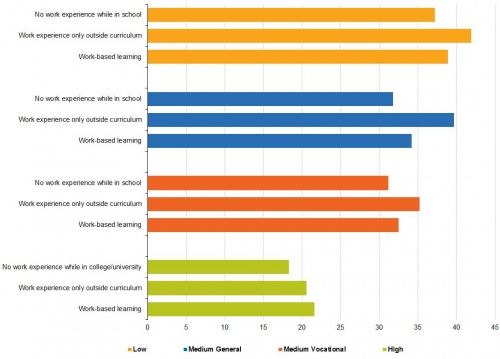 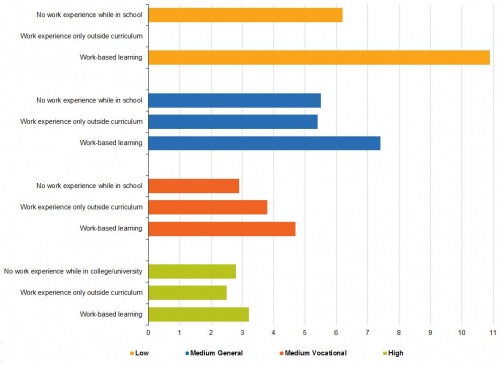 Figure 10 presents education/job mismatch. At EU-level, 16 % of employed persons aged 15-34 reported in 2016 that their current main job does not correspond at all to their level of education. The mismatch between the current job and the education level was highest in Denmark (32 %) and Slovakia (27 %), followed by France (24 %), Spain and Poland (both 23 %). As regards the non-EU Member States, one out of two persons in Turkey also had this problem. On the other hand, the job mismatch levels were the lowest in the Netherlands and Germany (both 6 %), Romania, Hungary and Switzerland (all 7 %).

Working while studying increases the chance of finding a job later 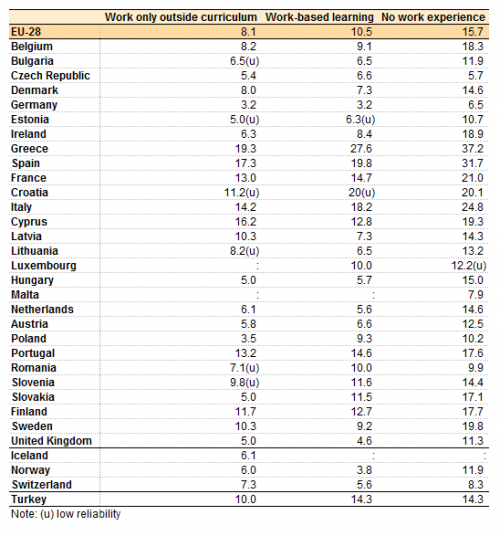 Figure 11 shows persons with completed medium level education and who had not (yet) completed tertiary education. Their decision on whether or not to continue their education is presented according to their previous work experience. 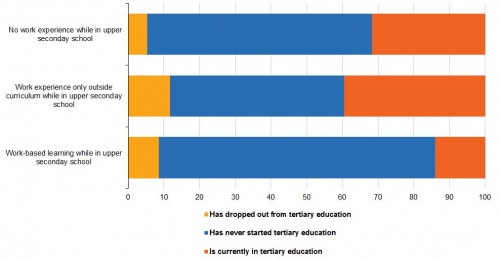 One in five are content with the Public Employment Services

Although there are notable differences in the way persons found their current job, three methods are much more common than the other methods (Figure 12). No matter the education level, asking relatives, friends or acquaintances, contacting employers directly and using advertisements vastly outnumber the other methods. 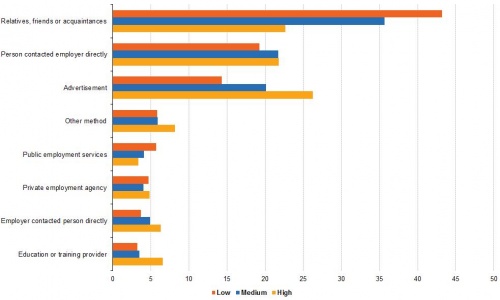 Figure 13 also shows that the use of public employment services are low. About 20 % of persons aged 15-34 say they have received helpful support to find a job this way. Those who are unemployed are happier with the received support than those who are in employment. The education level does not influence this result to any noticeable degree. 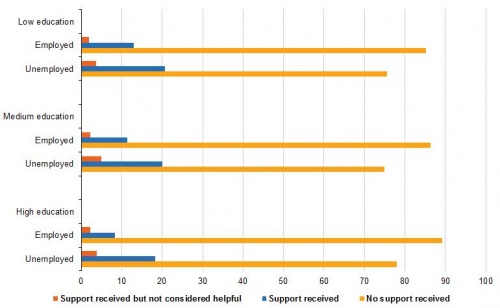 The data source for this article is the European Labour Force Survey ad hoc module 2016, covering all Member States, as well as Iceland, Norway, Switzerland and Turkey.

The Youth Guarantee is a commitment by all Member States to ensure that all young people under the age of 25 years receive a good quality offer of employment, continued education, apprenticeship or traineeship within a period of four months of becoming unemployed or leaving formal education.

The European Centre for the Development of Vocational Training is working to increase the quality of vocational training in Europe by making it more accessible and relevant to the needs of the labour market. This is a key component in reducing the number of early leavers from education and training. The Bruges communiqué, as part of the Copenhagen Process for European co-operation on vocational education and training, underlines the need for apprenticeships to provide labour market skills.

The European Council is promoting cross-border EU labour mobility through the Your first EURES job programme and the Programme for employment and social innovation.