Vineyards in the EU - statistics

In 2020, vines were grown on 3.2 million hectares in the EU, equivalent to about 45 % of the world’s total wine-growing areas.

There were 2.2 million vineyard holdings for wine in the EU in 2020, the vast majority of which were very small; 83.3 % had less than 1 ha of vineyards.

Spain, France and Italy together accounted for three-quarters (74.9 %) of the area under vines in the EU and about two-fifths (38.7 %) of vineyard holdings in 2020. 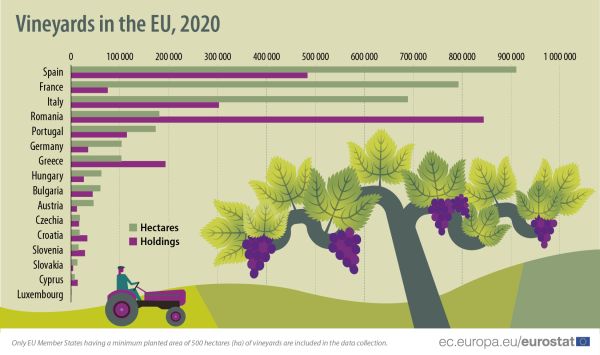 The European Union (EU) had 3.2 million hectares of vines in 2020, equivalent to about 45 % of the world’s wine-growing areas[1]. This article describes the vineyards in the European Union (EU) in 2020. The structural statistics on vineyards are a tool for monitoring the market for wine and other grape-based products and are collected every 5 years. The data collection covers the area under vines, the number of wine-grower vineyard holdings as well as other indicators such as the size of the vineyard holdings, the main varieties and age of vines.

Only EU Member States having a minimum planted area of 500 hectares (ha) of vineyards are included in the data collection. A total of 16 Member States are covered[2] representing 99.97 % of the total area under vine in the EU[3]. Holdings producing exclusively table grapes are excluded from this data collection.

The total area under vines in the EU was 3.2 million hectares (ha) in 2020, equivalent to 2.0 % of the utilised agricultural area (UAA). In 2020, there were 2.2 million vineyard holdings for wine (hereafter termed ‘vineyard holdings’) in the EU, the vast majority of which were very small; 83.3 % had less than 1 ha of vineyards.

3.2 million hectares of vineyards in the EU 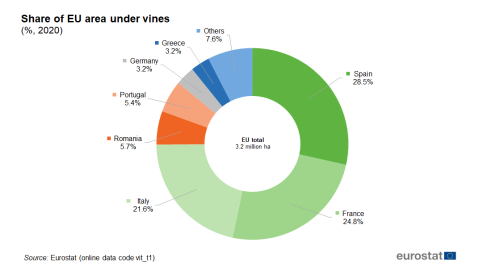 There are a number of regions in the EU that are specialised in wine production. About one-fifth of the utilised agricultural areas of Languedoc-Roussillon in France (21.3 %) and La Rioja in Spain (20.1 %) were planted to vines, and about 15 % in the Fruili-Venezia Guilia region of Italy and Madiera in Portugal. There was widespread regional specialisation in France, Spain, Italy and Portugal (see Map 1 and areas where the share of UAA under vines exceeded 8 %) as well as isolated regions in other Member States, like Wien in Austria (where 11.8 % of UAA was under vines), Attika in Greece (9.4 %) and Rheinland-Pfalz in Germany (NUTS1, 9.2 %). 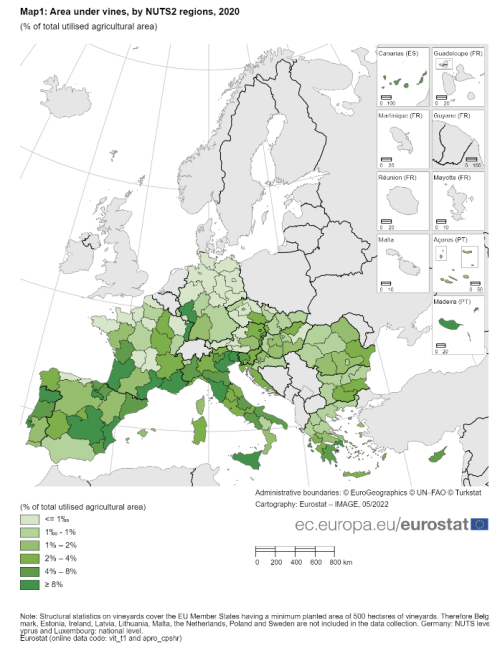 2.2 million vineyard holdings in the EU 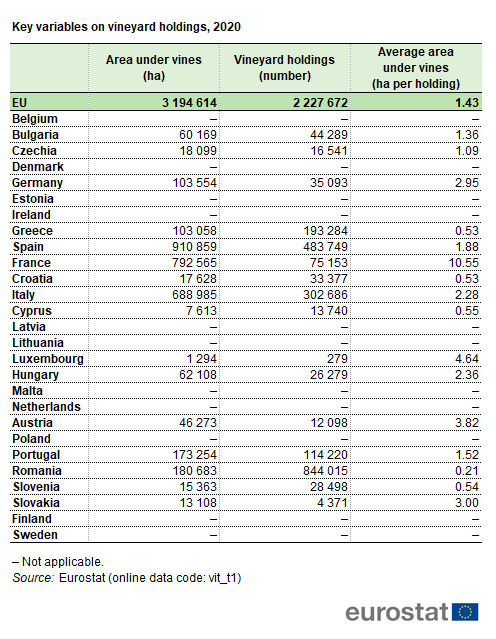 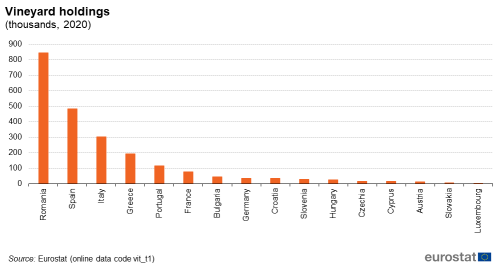 The EU’s vineyards are typically small, particularly when compared to the size of other farms that grow crops or raise livestock. The average (mean) size of a vineyard holding in the EU was 1.4 ha in 2020, compared with an average of 15.2 ha (2016) for all holdings in the EU. The smallest vineyards in the EU were in Romania (an average 0.2 ha per vineyard holding), and Croatia, Greece, Slovenia and Cyprus (all about 0.5 to 0.6 ha on average). By contrast, the average size of a vineyard holding in France was 10.5 ha, which was more than double that of the next highest average of 4.6 ha in Luxembourg (see Figure 3). 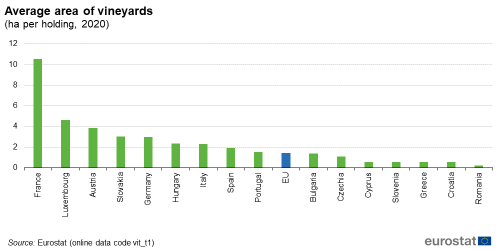 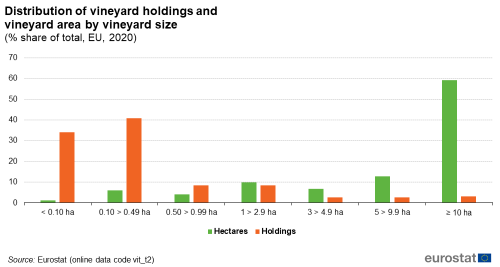 Most varieties, even the most widely planted, tend to be grown in a relatively narrow geographic spread: for example, Airen is only cultivated in Spain, Tempranillo tinto only in Spain and Portugal and Trebbiano toscano mostly in France and Italy. The key exceptions were Merlot noir and Chardonnay, which were each planted across 14 Member States. 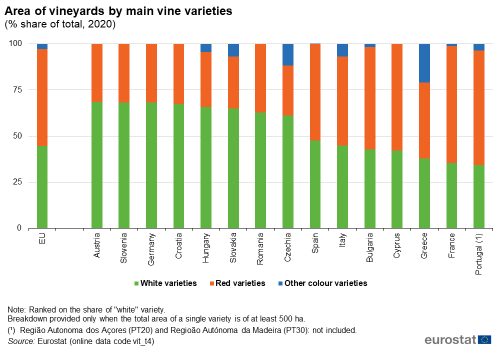 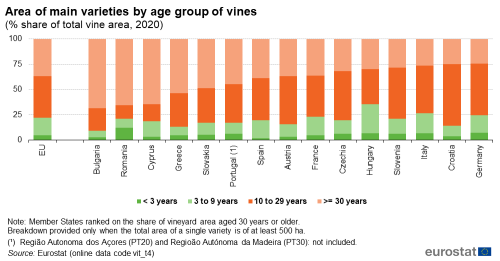 The type of grapes the vineyards in the EU produce are classified into six different categories (see Table 2 and Figures 7 and 8). Two of the categories used in the classification are considered ‘quality wine’:

In Czechia, Germany, Luxembourg, Austria and Slovenia all vines for wine grape production are exclusively for the production of quality wines. The relative shares in Croatia, Spain, Hungary and Slovakia were also above 90 % in 2020 (see Figure 7).

Only in Romania was a majority (72.1 % in 2020) of vines dedicated to the production of table wine. Vines for table wine were also relatively common in Bulgaria (38.7 % of all vines), Italy (24.3 %) and Portugal (20.1 %). Greece was the only Member State with vines dedicated to the production of raisins (dried grapes), and these vines represented 37.4 % of all vines in the country. 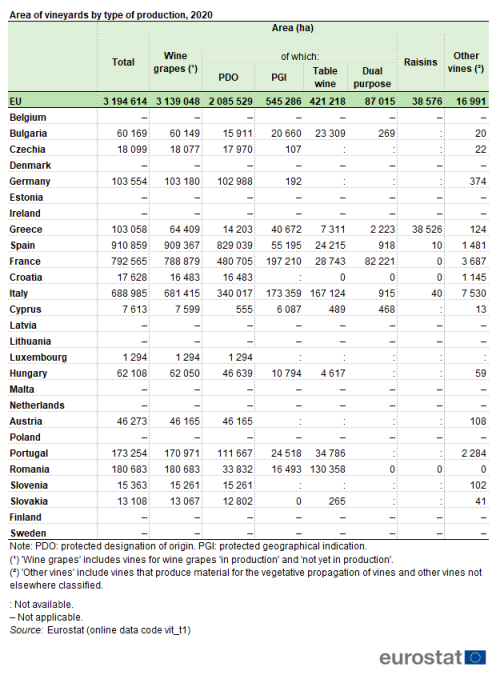 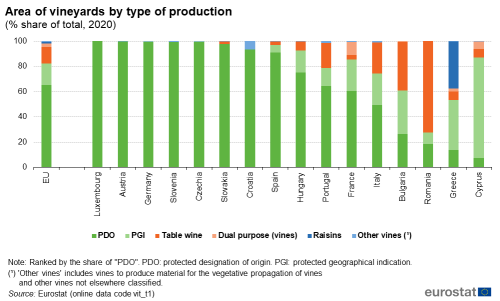 Between 2015 and 2020, the area of vines in the EU as a whole has remained relatively stable (-1.1 %). However, there was a sharp reduction of 257 000 in the number of vineyard holdings across the EU. Most of these holding losses came from the very smallest vineyard holdings; there were 226 000 fewer holdings than in 2015 in the size class with less than 1 ha of vines.

Statistical surveys on areas under vines

European statistics on the structure and production potential of vineyards have been collected from 1979 onwards. More thorough surveys have been done every ten years (1979, 1989, 1999 and 2009) until 2009. France and Italy conducted the 2009 survey together with the agricultural census in 2010. From 2015 onwards the data are to be extracted every 5 years from the vineyard register.

Since 2011 the statistics on vineyards are covered by Regulation (EU) No 1337/2011. The first data collection under this legislation took place in 2015, and its results are presented in this article.

Previously, EU statistics on vineyards were governed by Council Regulation (EEC) No 357/79 of 5 February 1979 on statistical surveys of areas under vines.

Data production threshold – Regulation (EU) No 1337/2011 is applicable to all Member States having a minimum planted area of 500 ha of vineyards. For the variety data only the main vine varieties having an area bigger than 500 ha at national level are included. It is not necessary to report smaller areas.

The areas intended to produce solely table grapes are excluded from the vineyard data collection. If vineyards produce dual purpose grapes ( e.g. for wine and table use) they are included in the Vineyard survey.

The area does not include abandoned areas which are no longer in production and have not been harvested for at least eight years.

Other utilised agricultural area (other than under vines) is not taken into account for size classification.

Protected designation of origin (PDO) designates the name of a product which must be produced within a determined geographical area using recognised and recorded know-how. All products with PDO status must be produced exclusively with grapes from the area in question.

Protected geographical indication (PGI) designates a product with a quality, reputation or other specific features that can be attributed to a determined geographical area. All products with PGI status must be produced with at least 85 % of the grapes coming from the area in question.

Planting year means the first year when the plant has vegetative development after the day when it is installed on its definitive production place.

Structural statistics on vineyards serve for monitoring the market of grape-based and wine products. The Commission needs information on the production potential of vineyards in order to ensure that the Common Agricultural Policy is properly administered.

The Common Agricultural Policy (CAP) includes provisions for the wine sector. As of 2016, in the wine sector, the planting rights system was replaced by a dynamic planting-authorisation management mechanism. More information can be found on DG AGRI’s site: ‘The reforms of the EU wine market.’

Structure of orchards and vineyards (orch_vit)