The EU in the world - research and information society

The highest research and development intensity in 2015 among the G20 members was in South Korea.

By 2016, all G20 members registered at least 80 mobile telephone subscriptions per 100 inhabitants. 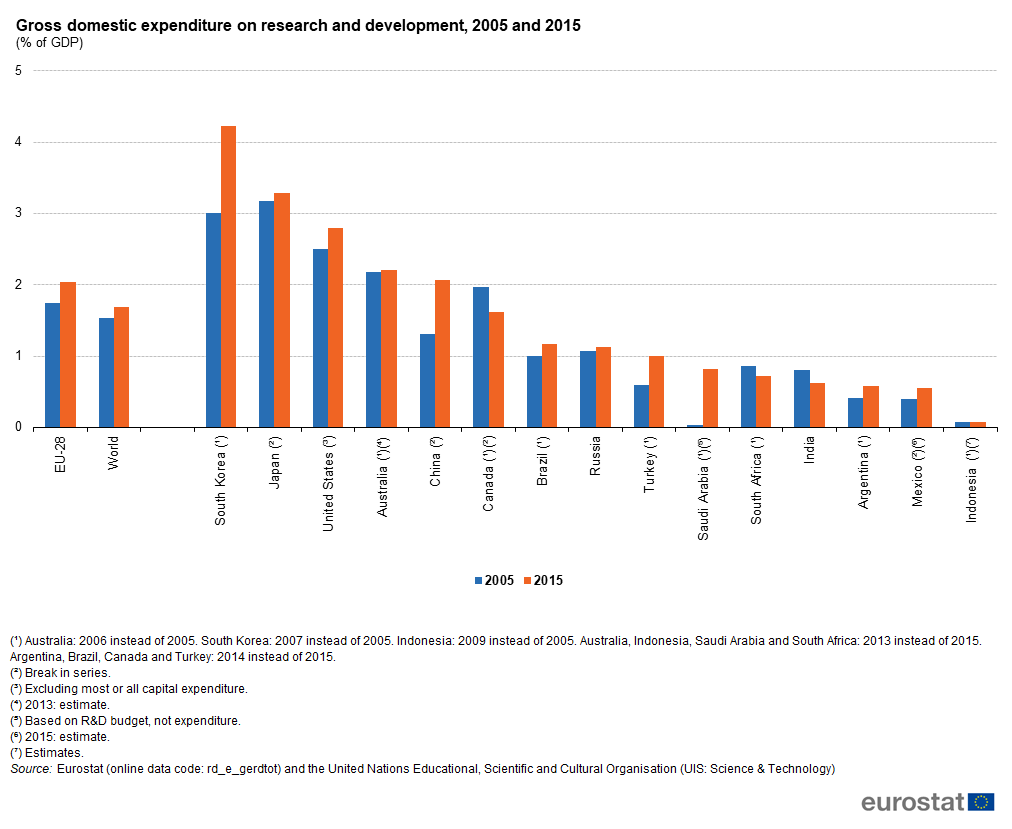 This article is part of a set of statistical articles based on Eurostat’s publication The EU in the world 2018.

This article focuses on science and technology and the digital society in the European Union (EU) and the 15 non-EU members of the Group of Twenty (G20). It covers a range of statistics on research and development (R & D) expenditure and personnel, and the use of information and communication technologies. It gives an insight into the EU’s economy in comparison with the major economies across the rest of the world, such as the EU’s counterparts in the so-called Triad — Japan and the United States — and the BRICS composed of Brazil, Russia, India, China and South Africa.

Research and development (R & D) includes creative work carried out on a systematic basis in order to increase the stock of knowledge of man, culture and society, and the use of this knowledge to devise new applications. Gross domestic expenditure on research and development (GERD) is a key measure of the level of R & D activity performed in an economy. It includes R & D that is funded from abroad, but excludes payments made abroad.

An alternative calculation based on R & D expenditure can be seen in Figure 2, namely the level of GERD relative to population size. For this indicator GERD is presented in a common currency (United States dollars) using purchasing power parities (PPPs) rather than market exchange rates: PPPs are indicators of price level differences across countries. The resulting ratio per inhabitant provides a very clear distinction between G20 members. The United States, South Korea and Japan stand out with GERD per inhabitant in excess of USD 1 300. Australia (2013 data), the EU-28 and Canada (2014 data) completed the group of G20 members with relatively high GERD per inhabitant, all in the range of USD 700-1 000. Among the other G20 members, only Saudi Arabia (2013 data), China and Russia recorded GERD in excess of USD 200 per inhabitant, while this indicator was below USD 10 per inhabitant in Indonesia (2013 data). 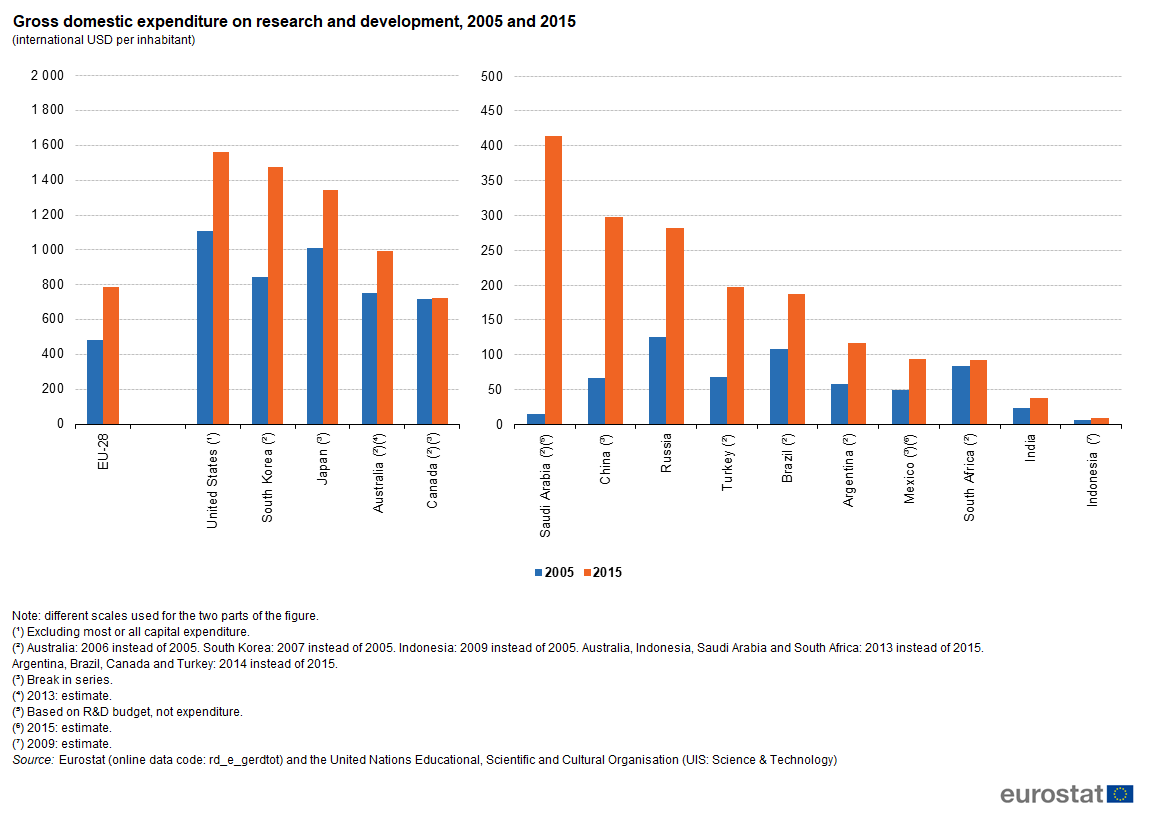 R & D personnel include all individuals employed directly in the field of R & D, covering not only researchers, but also technicians and equivalent staff as well as supporting staff (such as managers, administrators and clerical staff). Among the G20 members shown in Figure 3, China had the largest R & D workforce, numbering 3.8 million full-time equivalents in 2015, followed by the EU-28 with an R & D workforce of 2.9 million; note that the United States is among the G20 members for which data are not available. The third and fourth largest R & D workforces were in Japan and Russia, each less than a quarter of the size of the workforce in China and less than a third of that in the EU-28. A full-time equivalent is a unit to measure employed persons or students in a way that makes them comparable although they may work or study a different number of hours per week. The unit is obtained by comparing the number of hours worked or studied by a person with the average number of hours of a full-time worker or student. A full-time person is therefore counted as one unit, while a part-time person gets a score in proportion to the hours they work or study. 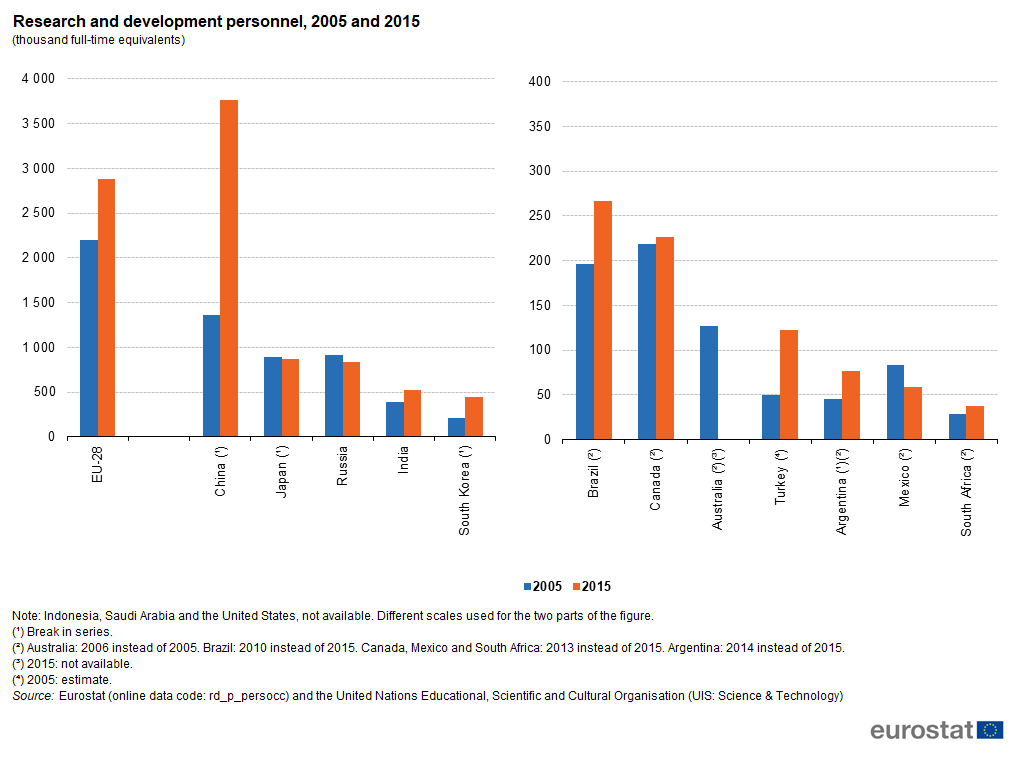 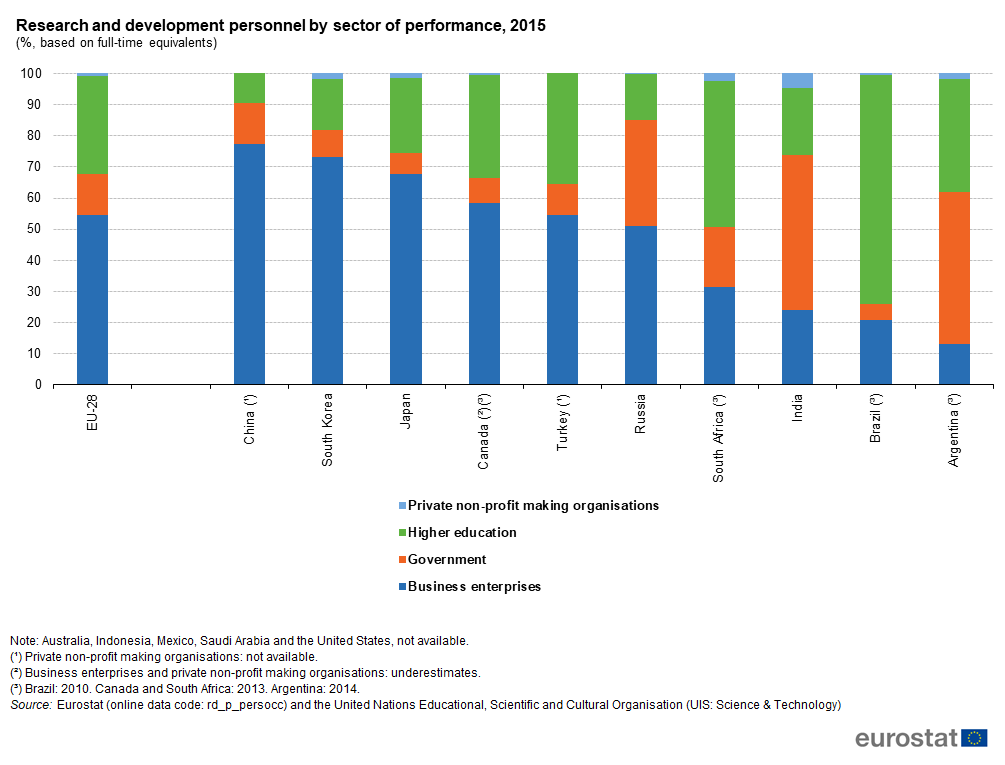 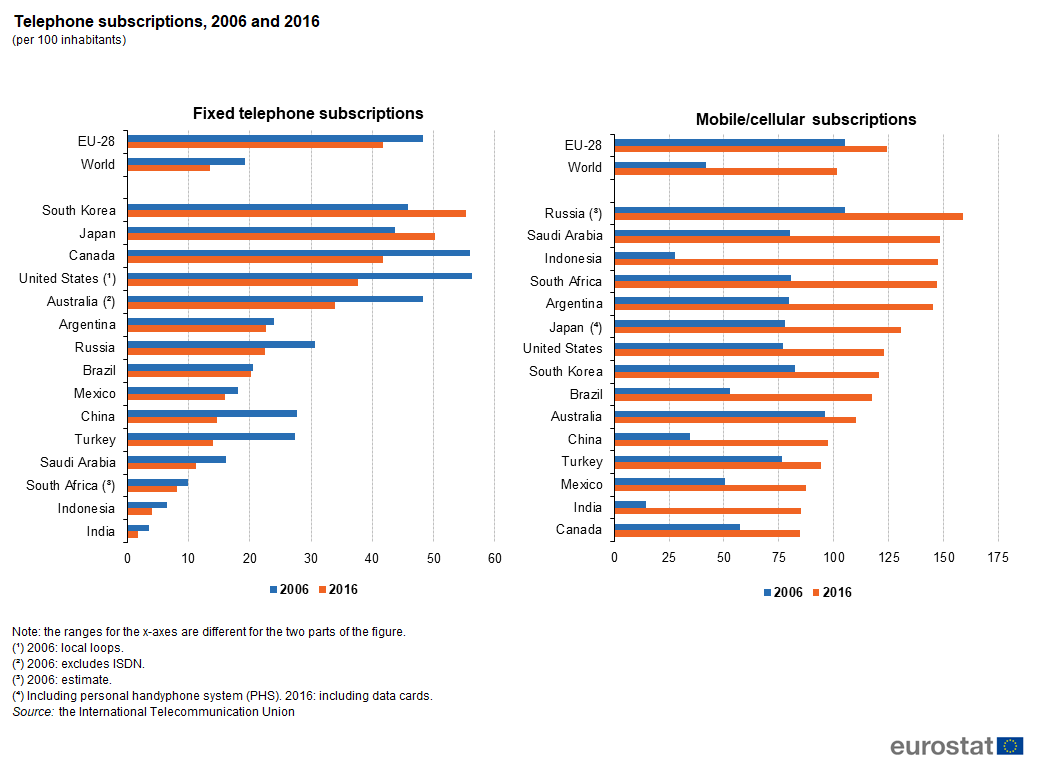 By 2016, all of the G20 members registered at least 80 mobile telephone subscriptions per 100 inhabitants 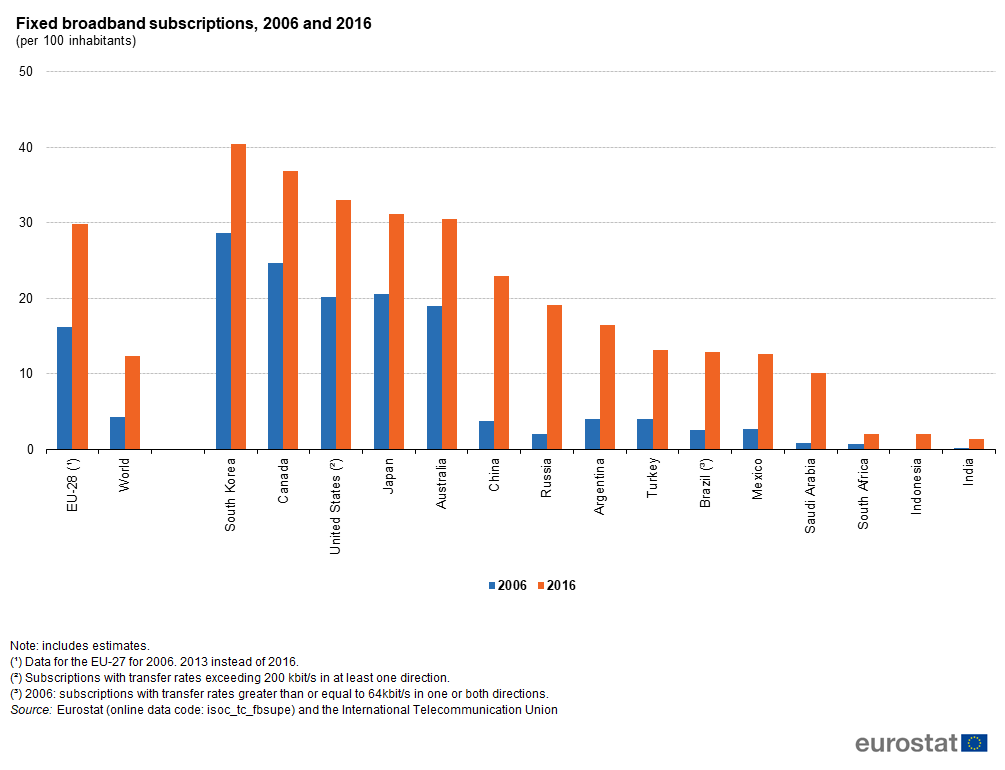 The statistical data in this article were extracted during April 2018.


All of the indicators presented for the EU have been drawn from Eurobase, Eurostat’s online database. Eurobase is updated regularly, so there may be differences between data appearing in this article and data that is subsequently downloaded.


For the 15 non-EU G20 members, the data presented have been compiled by the International Telecommunication Union and the United Nations Educational, Scientific and Cultural Organisation (UNESCO), supplemented by data from the World Bank. For some of the indicators shown a range of international statistical sources are available, each with their own policies and practices concerning data management (for example, concerning data validation, correction of errors, estimation of missing data, and frequency of updating). In general, attempts have been made to use only one source for each indicator in order to provide a comparable dataset for the members.

Practical applications of science are integrated in almost every moment of our lives, for example, in household appliances, medicine and healthcare, transport, communications and entertainment. R & D and innovation underlie such applications and are often considered as some of the primary driving forces behind competitiveness, economic growth and job creation.