The metropolitan typology is a classification based on the following two categories:

Metropolitan regions are NUTS level 3 approximations of functional urban areas (composed of a city and its commuting zone) with at least 250 000 inhabitants. Each metropolitan region consists of one or more NUTS level 3 regions and is named after the principal functional urban area within its boundaries. For a schematic overview of how the different typologies fit together, see Figure 2 in the introductory chapter.

The main building blocks used to identify functional urban areas are data for 1 km² population grid cells. Each grid cell has the same shape and surface area, thereby avoiding distortions caused by using units varying in size. This is a considerable advantage when compared with alternative approaches such as those based on the use of administrative data for local administrative units (LAUs).

These 1 km² population grid cells are plotted in relation to their neighbouring cells to identify cluster types; note this is the same process that is used for the degree of urbanisation typology (see Chapter 2). The cluster type used to identify cities is that of:

For a more detailed explanation of how densely populated grid cells are classified to urban centres (including the gap-filling process), see Chapter 1.

In some cases the relationship between LAUs and urban centres may be complex — details of exceptions and adjustments that are made when classifying functional urban areas are provided in Chapter 3.

The population grid cells are also aggregated for NUTS level 3 regions, determining the grid-based population of every region.

As metropolitan regions include the commuting zones around major cities, this approach corrects for some of the potential misinterpretations of data resulting from commuting patterns, for instance rendering measures such as GDP per inhabitant more meaningful. For example, statistics based on the NUTS classification for Paris and London tend to report very high levels of GDP per inhabitant in part due to the influence of commuters whose output is included in the numerator but who are excluded from the statistics for the population data used in the denominator. Extending any analyses to the wider geographical area defined by the metropolitan region corrects for distortions like these as there is a better relation in the coverage of the numerator and denominator.

As described above and as shown in Figure 2 in the introductory chapter, there is a direct link between the local typology of functional urban areas (see Chapter 3) and the regional typology for metropolitan regions, with the former being used as a basis to construct the typology for the latter.

There are also close links between the different concepts used for cities, functional urban areas and metropolitan regions; an example is shown for Barcelona in Chapter 3.

Finally, there is a relatively close relationship between the metropolitan typology and the urban-rural typology. Despite the absence of an identical category, these two regional typologies are quite similar, insofar as:

Figure 1 shows the classification of NUTS level 3 regions close to the Polish-Slovakian border and provides an example of the links between these two typologies. The differences between the typologies arise from three main sources: 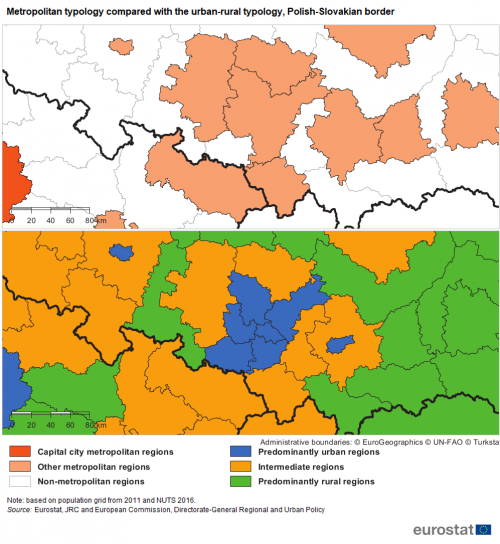 For all EU Member States, Norway and Switzerland, a list of metropolitan regions is available here. 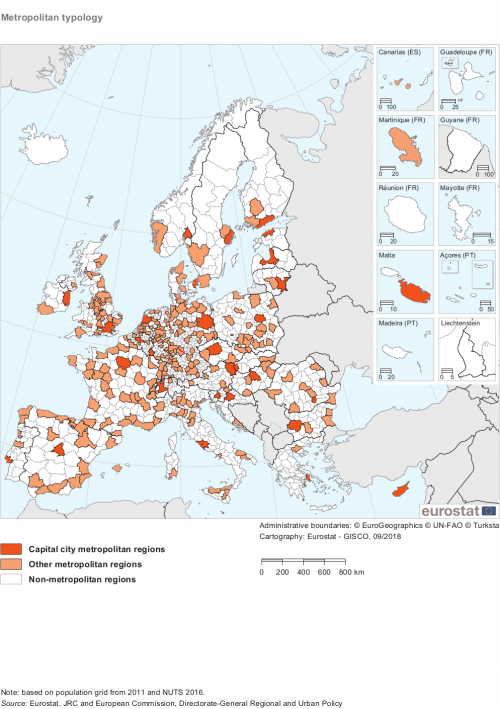 The metropolitan typology was developed by the European Commission’s Directorate-General for Regional and Urban Policy in association with Eurostat. The aim of the typology was to build on work already done by the OECD so as to provide a consistent basis for the description of metropolitan and non-metropolitan regions.

The frequency of updates for functional urban areas is a function of the availability of new commuting data; as such, it varies among the EU Member States. Most only collect LAU commuting data during a census year (generally once a decade). However, some Member States collect information on commuting each year through registers, they are in a position to update their classification of functional urban areas on a more regular basis.

Population grid statistics should be re-assessed in order to (re-)classify each NUTS level 3 region after each revision of LAUs, the functional urban areas, or the NUTS classification. Changes to the metropolitan regions classification resulting from a revision of population distributions for 1 km² grid cells are least common and these may be expected every 10 years. The next major update of the population grid is foreseen to take place for the 2021 reference year.

As an example, when moving from NUTS 2013 to NUTS 2016 there were two different situations identified which required changes to the metropolitan regions classification, namely:

At the time of writing, a 2021 population and housing census implementing regulation is in the process of being adopted by the European Commission. It includes an article for 1 km² population grid statistics. As well as information for annual counts of populations, it also foresees more detailed analyses: population by sex, population by age, number of employed persons, population by place of birth, population by usual place of residence one year prior to the census. LAU commuting data will also become available, as there is a strong stakeholder interest in commuting data within most of the EU Member States.

Eurostat are also discussing post-2021 census developments with national statistical authorities. It is hoped that the European statistical system (ESS) will agree to produce — from the mid-2020s onwards — annual counts of populations (based on usual place of residence) for a 1 km² grid, with data to be made available within 12 months of the reference period.

Eurostat publishes data for the metropolitan typology through Regions and cities illustrated.

Eurostat’s website provides information for a wide variety of indicators for the metropolitan typology. These statistics are available for the following statistical domains: demography, population projections, the labour market, crimes recorded by the police, economic accounts, business demography, intellectual property rights and transport. They are available here. 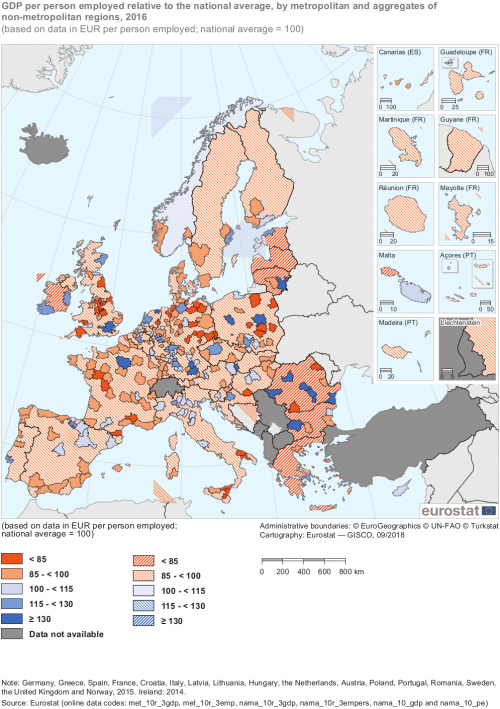 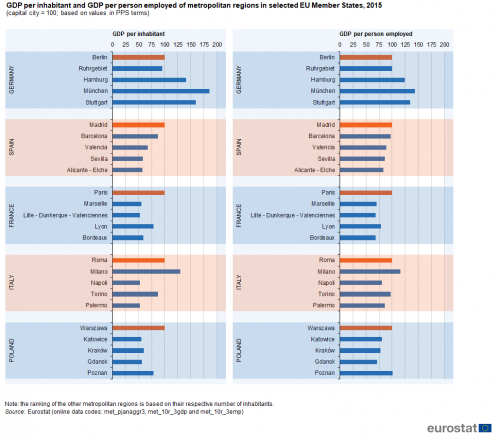