In 2019, expenditure on all types of social protection in the EU was equivalent to 28.1 % of GDP.

In 2019, old age and sickness/healthcare together accounted for close to two thirds (66.9 %) of the EU’s social protection expenditure.

This article analyses recent [1] statistics on social protection in the European Union (EU). These encompass interventions from public or private bodies intended to relieve households and individuals of the burden of a defined set of risks or needs, provided that there is neither a simultaneous reciprocal nor an individual arrangement involved. The most common risks and needs are those associated with: sickness/healthcare; invalidity and disability; old age; parental responsibilities; the loss of a spouse or parent; unemployment; housing; and social exclusion.

In 2019, expenditure on social protection relative to gross domestic product (GDP) was 28.1 % in the EU. Across the EU Member States, this ratio was highest in France (33.6 %), while Denmark (31.3 %), Germany (30.3 %) and Finland (30.0 %) also reported ratios of at least 30.0 %. By contrast, social protection expenditure represented less than 17.0 % of GDP in Hungary, Bulgaria, Lithuania, Estonia, Latvia, Malta and Romania, with the lowest ratio among the Member States registered in Ireland (13.6 %). Among the non-EU countries Turkey recorded an even lower ratio, at 12.5 %.

In Finland, expenditure on social protection relative to GDP was 1.1 percentage points higher in 2019 than it had been in 2009 (at the low point of the global financial and economic crisis). This was the largest increase recorded among any of the EU Member States during this period, ahead of increases of 1.0 points in Poland, 0.9 points in Italy and 0.8 points in Croatia. Larger increases were recorded among some of the non-EU countries shown in Table 1: 3.2 points in Norway, 2.2 points in Iceland and 1.9 points in Switzerland.

By contrast, a majority of EU Member States recorded lower ratios of social protection expenditure to GDP in 2019 when compared with 2009; this was also the case in Serbia and Turkey. The largest decrease among the Member States was in Ireland, down 11.1 points, reflecting in part GDP developments related to globalisation effects. Elsewhere the largest decreases were 6.0 points in Hungary (in part reflecting a break in series) and 4.5 points in Lithuania. Malta, Denmark, Estonia and Sweden also recorded decreases of at least 2.0 points. 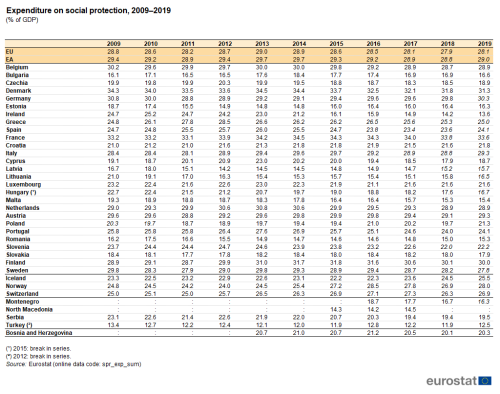 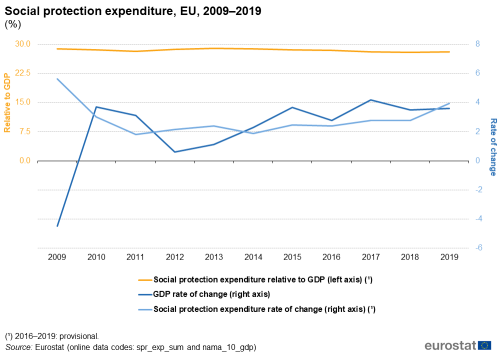 The specific characteristics of national tax and benefit systems may explain some of the differences in levels of social protection benefits between EU Member States, for example, the taxes and social contributions paid on benefits by beneficiaries and the extent to which social benefits are provided in the form of tax rebates or tax reductions (see the section on Data sources below for more details).

In 2019, the gap between gross and net expenditure on social protection benefits in the EU averaged 2.5 % of GDP. There were greater gaps in some of the EU Member States, with the largest differences – as a percentage of GDP – often recorded for Member States with some of the highest ratios of gross expenditure on social protection relative to GDP (see Figure 2). This was notably the case for the Netherlands (a gap of 5.1 percentage points between gross and net expenditure) and Denmark (4.6 points), both of which had ratios for gross expenditure that were above the EU average. 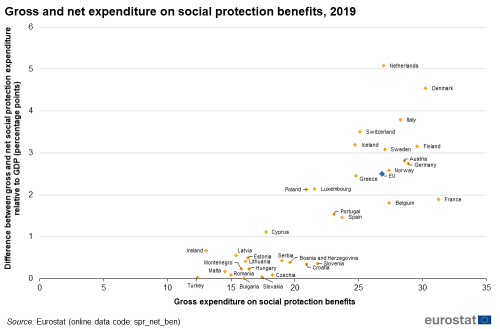 Analysis of the structure of social protection expenditure

As such, the two largest items – old age and sickness/healthcare benefits – together accounted for 66.9 % of total expenditure. 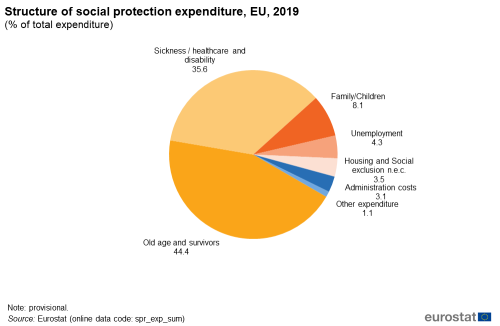 At the other end of the range, ratios below 8.0 % were recorded in Romania, the three Baltic Member States of Estonia, Latvia and Lithuania, Bulgaria and Malta, while the lowest ratio was recorded in Ireland (5.0 %) – see Figure 4. 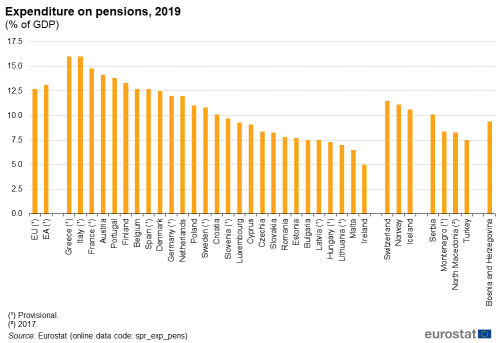 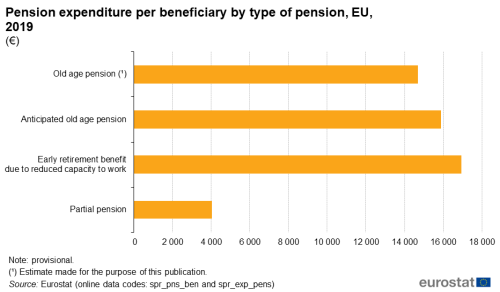 It is important to note that data relating to pension expenditure per beneficiary do not necessarily reflect the level or adequacy of individual old age pensions. The figures are based on aggregate expenditure and the number of beneficiaries for a wide range of different types of pension – granted under different circumstances and serving various distinct purposes – in each of the EU Member States. Invariably, different pension schemes provide different levels of benefits, while the combinations of different pension schemes in each of the Member States will have a significant influence on the figures recorded at an aggregate level. Furthermore, data on pensions refer to gross expenditure and do not take into account the effect of taxes and social contributions (where relevant), as these vary both between and within Member States. For example, while all pensions may be tax free in one Member State, taxes may be applied to particular types of pensions in another. 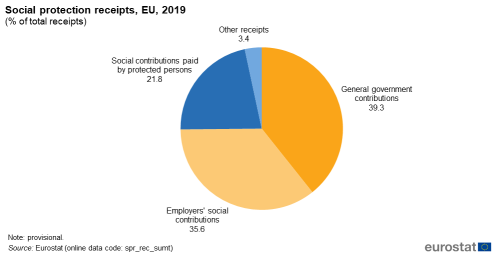 Social protection receipts in the EU grew from €7 100 per inhabitant to €9 100 per inhabitant between 2009 and 2019, as overall receipts rose by a total of 31.1 %. The biggest change in the structure of receipts over this period was in relation to employers’ social contributions, whose share in total receipts fell from 37.3 % in 2009 to 35.6 % by 2019. By contrast, there was an increase in the relative share of general government contributions, from 38.0 % to 39.3 % over the same period.

Note that in most of the EU Member States other receipts tended to be relatively insignificant. They only contributed more than 5.0 % of total social protection receipts in six Member States, and only exceeded 10.0 % in the Netherlands. Relatively high shares for other receipts were observed among non-EU countries in Switzerland and most notably Iceland. 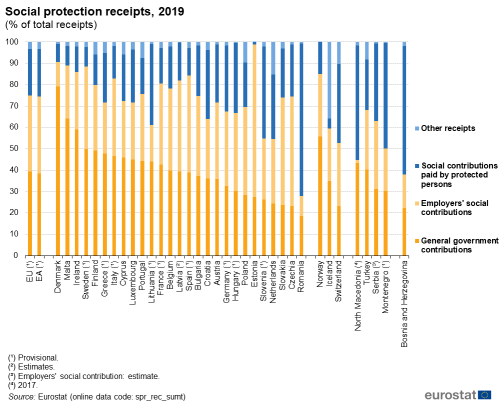 In 2019, Eurostat released an updated version of the ESSPROS manual and user guidelines, which provides information on compiling and using ESSPROS data correctly.

The first formal data collection for net social protection expenditure took place in 2012 for the reference year 2010. A so-called ‘restricted approach’ is used which means that it is strictly limited to measuring the impact of the fiscal system on gross cash benefits reported in the ESSPROS core system (benefits in kind are not covered). It does not, therefore, take full account of tax relief for social purposes which reduce the amount of taxes paid on other (non-benefit) income or which may be granted to persons who do not receive any (cash) benefits. These types of relief are taken into account only in relation to the extent to which they reduce the amount of taxes normally payable on cash benefits. Similarly, tax relief for social purposes which reduce indirect taxes are not accounted for. The full value of such tax relief would only be addressed by the ‘enlarged’ approach (enlarged because the population of beneficiaries is larger). More information is available in an article on Social protection statistics – net expenditure on benefits.

The European system of national and regional accounts 2010 (ESA 2010) replaced ESA 1995. This change had consequences in relation to ESSPROS results which were indirectly affected by the implementation of ESA 2010. The revision of ESSPROS data to take into account changes to national accounts methodology took place for a large majority of EU Member States during the collection of data for the 2013 reference period.

Social protection systems are generally well-developed across the EU: they are designed to protect (to some degree) people against the risks and needs associated with unemployment, parental responsibilities, sickness/healthcare and invalidity, the loss of a spouse or parent, old age, housing and social exclusion (not elsewhere classified).

Pension systems can play a role in allowing beneficiaries to maintain living standards they enjoyed in the later years of their working lives. However, as Europe’s population is becoming progressively older, one of the main challenges faced by social protection systems is related to their financing, as the proportion of older persons continues to grow while the share of the population that is of working age decreases.

The main policy framework in this domain concerns the open method of coordination for social protection and social inclusion, which aims to promote social cohesion and equality, through adequate, accessible and financially sustainable social protection systems and social inclusion policies. A Communication from the European Commission Working together, working better: a new framework for the open coordination of social protection and inclusion policies in the European Union (COM(2005) 706 final) outlines the objectives, which include:

The European pillar of social rights sets out 20 key principles and rights to support fair and well-functioning labour markets and welfare systems. This forms part of the policy developments related to an economy that works for people, one of the European Commission priorities for the period 2019–2024. The pillar contains three main categories for action, one of which concerns social protection and inclusion and covers the following principles.