In 2018, the vast majority (94.4 %) of the 1.5 million pupils across the EU-27 in post-secondary non-tertiary education were attending vocational programmes.

School helps young people acquire basic life skills and competences that are necessary for their personal development. The quality of a pupil’s school experience affects not only their development, but also their place in society, level of educational attainment, and employment opportunities.

The quality of education may be linked to teaching standards, which in turn are related to the demands placed upon teachers, the training they receive, the roles they are asked to fill and the resources that are made available for them to carry out their tasks. Equally, the quality of education may show local or regional variations, related to a variety of socio-demographic factors.

The number and share of students found in each of the two levels of secondary education — lower (ISCED level 2) and upper (ISCED level 3) — and in post-secondary non-tertiary education (ISCED level 4) varies between EU Member States. This reflects, to some degree, the demographic structure of each population and also country-specific policies relating to various aspects such as the length of compulsory education and the availability of further training outside of the education system and/or at the end of secondary education. In particular, it should be noted that post-secondary non-tertiary education, which prepares students for labour market entry as well as for tertiary education, does not exist in some of the Member States (Denmark, Croatia, Cyprus, the Netherlands and Slovenia) and is relatively uncommon in several others; it also does not exist in the United Kingdom, Liechtenstein, Montenegro or Turkey. 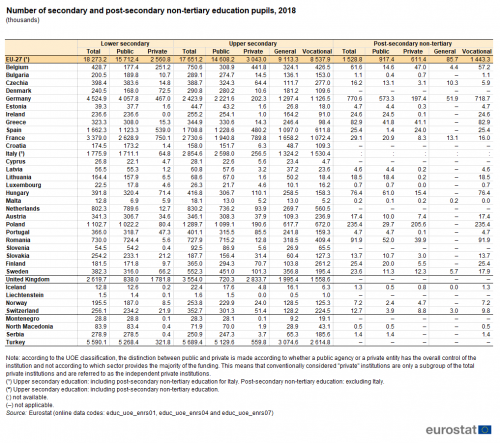 Participation by type of programme

An analysis of pupils graduating from upper secondary (Figure 1) and post-secondary non-tertiary education (Figure 2) shows differences between the sexes. Generally, in upper secondary education the gender distribution was relatively balanced. In 2018, 14 of the EU Member States reported slightly more male graduates, reaching shares of 52.5 % in Hungary and 52.2 % in Germany, while 11 Member States reported more female graduates at this level of education, reaching a share of 56.0 % in Finland; there were almost equal numbers of male and female students in Estonia and Poland. Among the non-member countries shown in Figure 1, Liechtenstein reported an even higher share of male graduates than did Hungary, while the share in North Macedonia was the same as in Hungary.

Among post-secondary non-tertiary education graduates, there was a fairly clear pattern of more female than male graduates — see Figure 2. In 2018, 60.9 % of all graduates at this level of education in the EU (see Figure 2 for coverage) were female. There were 16 EU Member States (among the 21 for which data are available) where there were more female than male graduates. The female share was close to three quarters in Poland, Austria and Malta. Among the five Member States where there were more male graduates than female graduates, the highest share for men was recorded in Luxembourg (87.3 %); a similarly high share for male graduates was recorded in North Macedonia (87.2 %). Norway was the only non-member country (for which data are available) where there was a higher share of female (rather than male) post-secondary non-tertiary education graduates.

Within lower secondary education in 2018, men accounted for 32.1 % of all teachers in the EU-27, with this share ranging from below 18.0 % in Slovenia (2017 data) and the Baltic Member States up to highs of 46.2 % in Luxembourg and 46.3 % in the Netherlands. Among the non-member countries included in Table 2, the share of male teachers in lower secondary education was also relatively high in Liechtenstein and North Macedonia (both 40.1 %), Turkey (42.6 %) and Switzerland (44.4 %).

Information on the gender distribution of teachers for post-secondary non-tertiary education is available for 17 EU Member States for 2018. In Luxembourg (71.8 %), Malta (60.0 %), France (59.5 %; excluding independent private institutions), Czechia (56.6 %), Belgium and Sweden (both 55.5 %), a majority of post-secondary non-tertiary teachers were male; there was an equal balance between the sexes in Bulgaria. Among those Member States where women accounted for a majority of teachers at this level, the highest shares were recorded in Slovakia (68.3 %), Poland (69.0 %), Austria (69.1 %) and Romania (77.0 %). 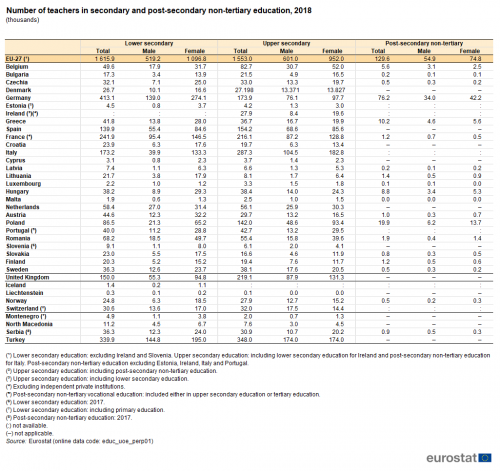 In 2018, pupil-teacher ratios in lower and upper secondary education were broadly similar to those observed for primary education. The pupil-teacher ratio for lower secondary education ranged among the EU Member States from less than 8.0 in Slovenia (2017 data), Malta, Lithuania and Greece, to 14.4 in France (excluding independent private institutions) and a peak of 16.1 in the Netherlands. Liechtenstein (7.3) was the only non-member country for which data are shown in Table 3 to record a pupil-teacher ratio that was less than 8.0 in 2018, while Turkey (15.9) reported a ratio that was almost as high as in the Netherlands. 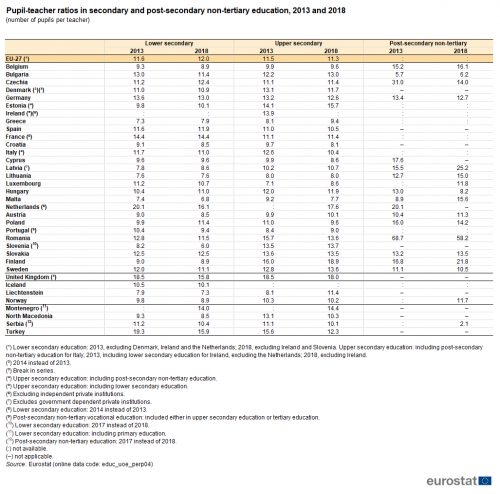 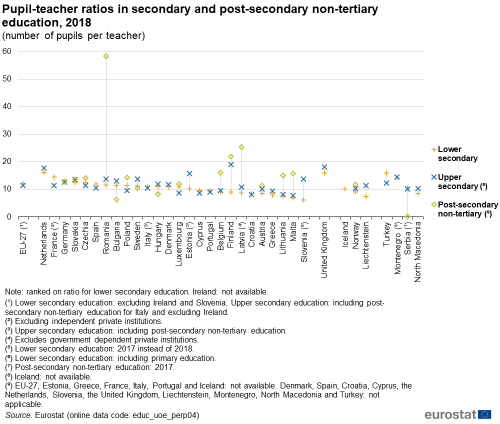 The relative importance of public financial resources devoted to education may be measured by public expenditure on various levels of education relative to gross domestic product (GDP). For lower secondary education in 2017 (see Figure 4; no data available for Croatia), this ratio varied from 0.5 % in Ireland and 0.6 % in Romania, Latvia, Estonia and Poland to 1.2 % in Austria, Germany and France. 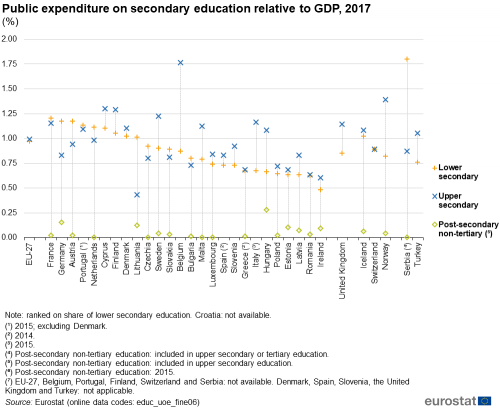 Public expenditure on upper secondary education relative to GDP was within a broadly similar range, with a low of 0.4 % recorded in Lithuania, while the ratio was 1.3 % in both Finland and Cyprus, peaking at 1.8 % in Belgium.

Students typically enter ISCED level 2, or lower secondary education, between the ages of 10 and 13. Programmes at this level are typically designed to build on the learning outcomes from ISCED level 1. They are usually organised around a more subject-oriented curriculum, introducing theoretical concepts across a broad range of subjects. Teachers typically have pedagogical training in specific subjects and a class of students may have several teachers with specialised knowledge of the subjects they teach.

Students typically enter ISCED level 3, or upper secondary education, between the ages of 14 and 16. Programmes at this level are typically designed to complete secondary education in preparation for tertiary education or to provide skills relevant for the labour market, or both. They offer students more varied, specialised and in-depth instruction, while teachers are often highly-qualified in the subjects or fields of specialisation they teach.

Demographic developments in the last three decades are reflected in reduced birth rates that, in turn, have impacted upon the structure of the EU’s population: the proportion of people aged under 30 has decreased in a majority of the EU Member States. These changes can have a significant impact on human and material resources required for the sound functioning of education systems, such as average class sizes or teacher recruitment strategies.

EU Member States have agreed on the following priority areas for schools:

Each of these issues is touched upon by a European Commission Communication on school development and excellent teaching for a great start in life (SWD(2017) 248 final) that was adopted in May 2017.