Production and international trade in chemicals

Highlights
Tweet
In 2019 the EU was the largest exporter of chemical products in the world and the second largest importer (after the US).
Tweet
The United States, Switzerland and the United Kingdom were the three largest partners of the EU for exports and imports of chemicals in 2020.
Tweet
The average annual growth of sold production of chemicals in the EU was 2.7 % between 2010 and 2020.
[[File:Production and international trade in chemicals 2020.xlsx]]

This article presents statistics on the European Union’s (EU) sold production and trade in chemical products. It focuses on the EU imports and exports of chemicals with the rest of the world, as well as on how they are related to the total EU sold production of chemicals. 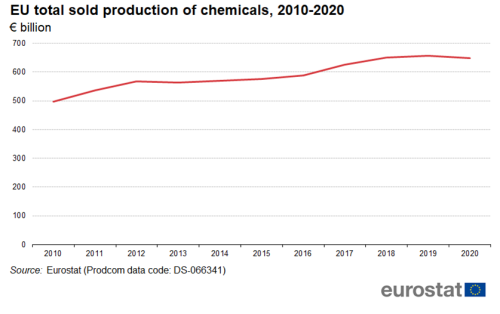 The value of EU exports of chemicals was significantly higher than the value of its imports, but followed more or less the pattern of imports. Thus exports grew from EUR 242 billion in 2010 to EUR 411 billion in 2020. The average annual growth of exports over the whole period was 5.4 % which was 1.2 percentage points higher than for imports. 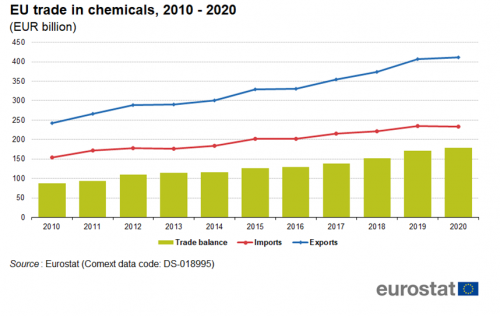 EU is the largest exporter of chemical products

Looking at the major international players in chemicals trade, the EU headed the list in 2019 with a total trade of EUR 642 billion, which consisted of EUR 407 billion of exports and EUR 235 billion of imports, thus recording the highest trade surplus ( EUR 172 billion) as shown in Figure 3. The United States was the largest importer (EUR 243 billion) and second largest exporter ( EUR 201 billion). China was both the third largest importer and exporter with values of EUR 196 billion and EUR 145 billion respectively. 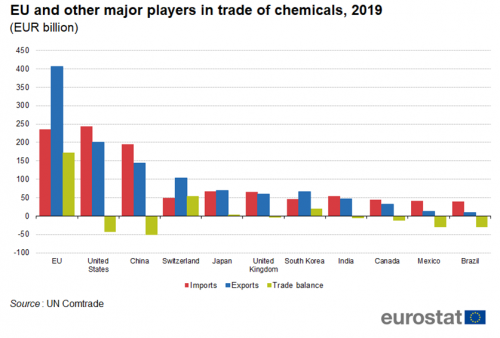 The United States, Switzerland and the United Kingdom were the EU's three largest partners for both exports and imports of chemicals in 2020 (see Figure 4). The EU had a trade surplus with eight of the ten largest partners measured in total trade (exports plus imports), most notably with the United States (EUR 61 billion), Russia (EUR 13 billion) and the United Kingdom (EUR 11 billion). There were trade deficits with Switzerland (EUR 13 billion) and South Korea (EUR 2 billion). 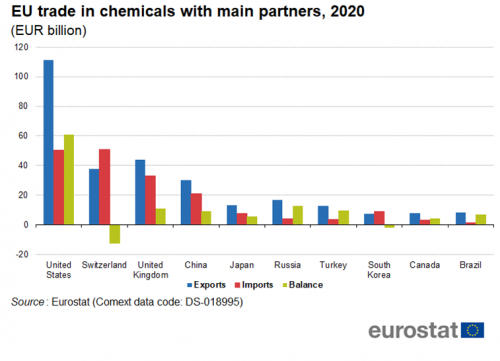 Sold production and trade of chemicals by product 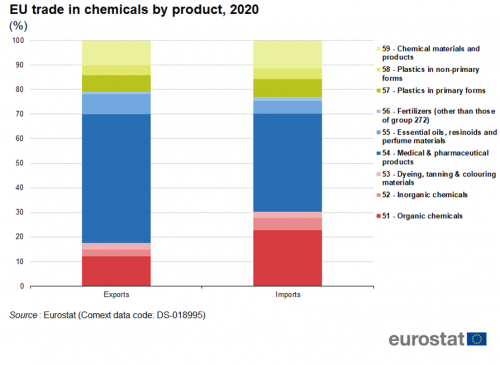 Figure 6 shows that sold production grew between 2010 and 2020 in all groups. In absolute term the largest increase was for medical products, rising from EUR 117 billion in 2010 to EUR 186 billion in 2020. The average annual growth was highest for chemical materials and products (4.9 %), closely followed by medical & pharmaceutical products (4.8 %). 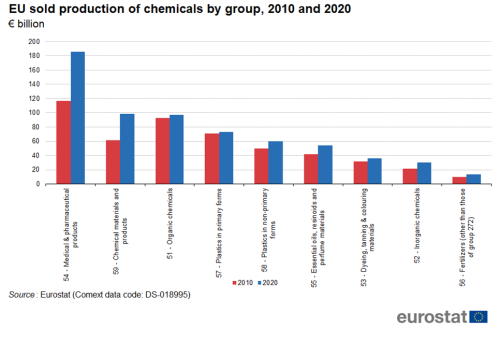 Table 2 summarises the EU sold production and trade of chemical products in 2020. It should be pointed out that this data comes from two distinct surveys: the data on sold production comes from PRODCOM and the data on trade from COMEXT. The production data is collected from producing enterprises and the survey is mandatory for enterprises with 20 employees or more. International trade data on the other hand is recorded in the EU Member States where the goods are placed under the customs procedures. Each time a product crosses a border it is registered as a 'trade', and if the same product crosses borders several times, it is recorded as several trades. These specificities should be considered when comparing the production and external trade data.

Germany (EUR 48 billion), the Netherlands (EUR 37 billion) and Belgium (EUR 36 billion) were the only three EU Member States importing more than EUR 30 billion of chemicals from outside the EU in 2020 (see Table 3).

There were five Member States exporting more than EUR 30 billion of chemicals outside the EU in 2020. These were Germany (EUR 105 billion), Ireland (EUR 55 billion), Belgium (EUR 51 billion), France (EUR 45 billion) and the Netherlands (EUR 41 billion). 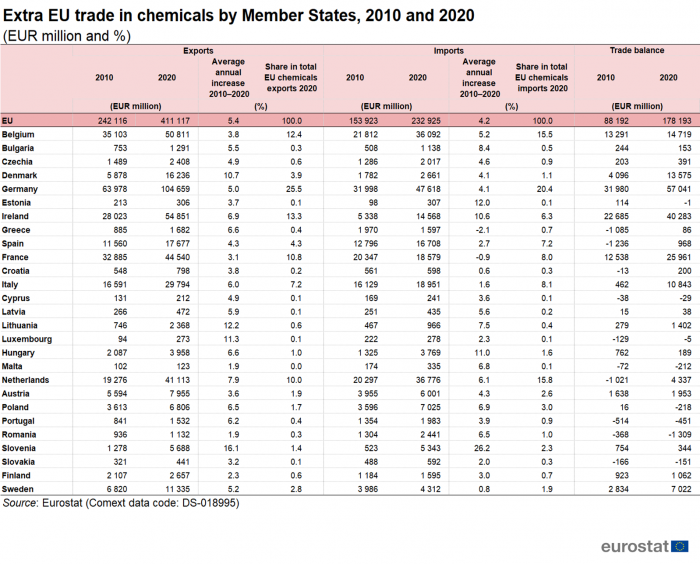 Prodcom data is obtained by the National Statistical Institutes (NSIs) who conduct a survey of enterprises. Eurostat calculates EU totals at EU level from the national data.

International trade in chemicals Trade in goods data comes from Eurostat's COMEXT database. COMEXT is the Eurostat reference database for international trade in goods. It provides access not only to both recent and historical data from the EU Member States, but also to statistics of a significant number of non-EU countries. Because COMEXT is updated on a daily basis, data published on the website may differ from data stored in COMEXT in case of recent revisions.

Chemical products are classified according to the Standard International Trade Classification (SITC) of the United Nations. Section 5 ‘Chemicals and related products, N.E.S.’ of SITC Rev. 4 is made up of the following divisions:

Through the seventh Environment Action Programme to 2020 (7th EAP) the EU sets policies on chemicals management, of which REACH (the Registration, Evaluation, Authorisation and Restriction of Chemicals) is the central element. The main aim of REACH is to ensure a high level of protection of human health and the environment from the risks that can be posed by chemicals. This includes promoting alternative methods to assess the hazards of substances, the free circulation of substances on the internal market, and the enhancement of competitiveness and innovation in the EU chemical industry.

By providing knowledge about hazardous properties of chemicals and appropriate safety information, REACH is expected to enhance the communication and implementation of conditions of safe use in supply chains and the substitution of dangerous substances by less dangerous ones. In addition, through different types of measures on highly dangerous substances, EU policies aim to reduce the risks to human health and to ecosystems at EU level.