In 2020, the highest crude divorce rates within the EU were reported in Latvia, Lithuania and Denmark (all 2.7 divorces per 1 000 persons).

This article presents developments that have taken place in relation to family formation and dissolution through an analysis of marriage and divorce indicators. Marriage, as recognised by the law of each country, has long been considered the mark of the formation of a family unit. However, the analysis of trends in family formation and dissolution based on just marriage and divorce data might not offer a full picture. Legal alternatives to marriage, such as registered partnership, have become more widespread and national legislation has changed to confer more rights on unmarried couples. Similarly, with divorce being made procedurally easier, it is harder to make reliable data available.

The number of marriages per 1 000 persons decreased within the EU in recent decades, while the number of divorces increased. However, these two trends seem to have slowed down in recent years. An increase in the proportion of children who are born to unmarried couples was also observed. 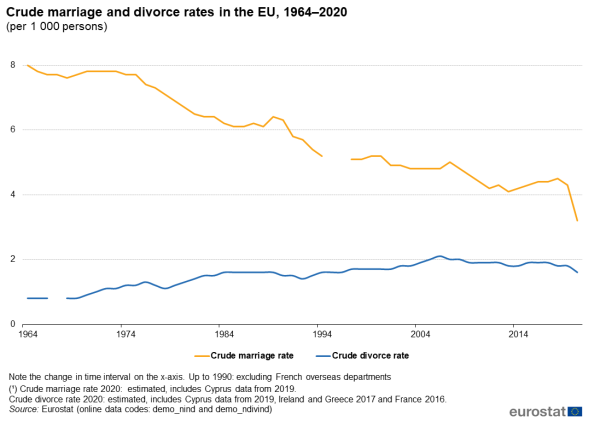 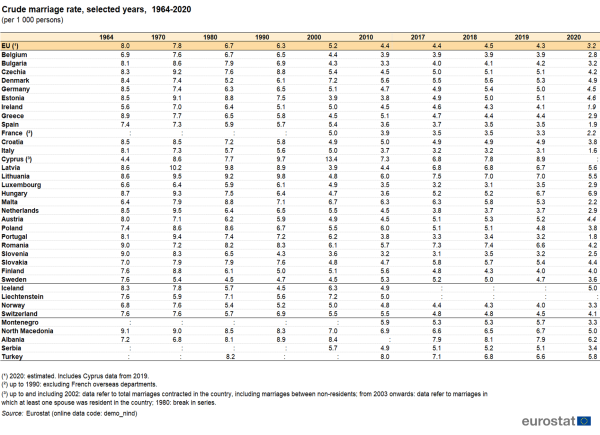 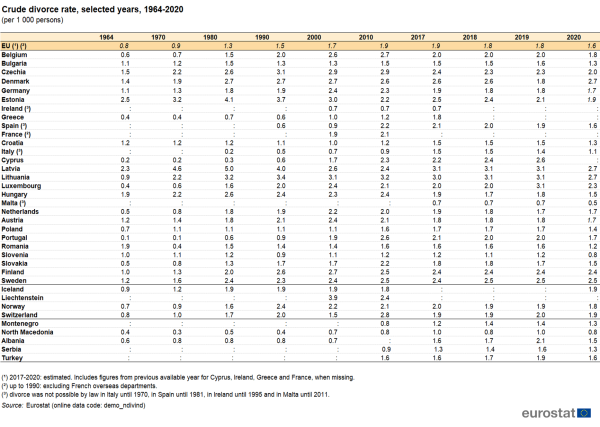 The proportion of live births outside marriage has shown an increasing trend in the past decades, almost doubling since 1993 (17.7 %) when this data was first available in the EU. In 2020 this proportion was estimated at 41.9 % (see Table 3) which means that 58.1 % of children were born inside marriage. The most recent data available for Belgium is 2018, for Cyprus 2019 and for Malta 2017. This share suggests new patterns of family formation alongside the more traditional pattern where children were born within marriage. Extramarital births occur in non-marital relationships, among cohabiting couples and to lone parents. 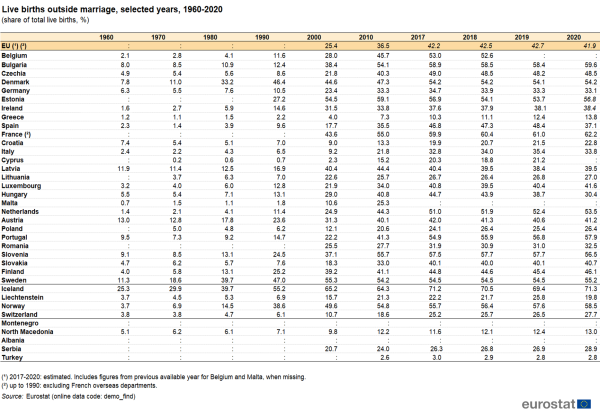 The family unit is a changing concept: what it means to be a member of a family and the expectations people have of family relationships vary with time, making it difficult to find a universally agreed and applied definition. Legal alternatives to marriage, like registered partnerships, have become more widespread and national legislation has changed to confer more rights on unmarried and same sex couples. Alongside these legal forms, other forms of non-marital relationships have appeared, making it more difficult for statisticians to collect data within this domain that can be compared across countries.