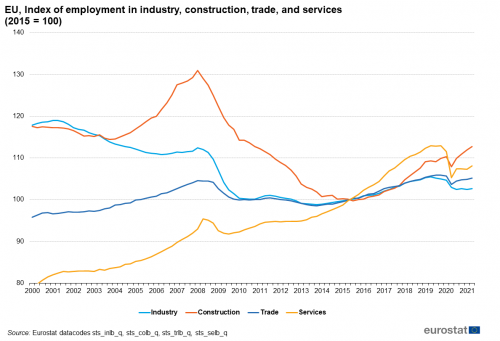 This article presents the labour input indicators, which are business cycle indicators measuring for each quarter how the labour input used by industry, construction, trade and services changes and provides important information for the analysis and forecast of economic developments in the European Union (EU).

During the last decade the number of employed persons has developed very differently in the main economic sectors – industry, construction, trade and services (Figure 1). In industry, the number of persons employed had already begun to decline before the financial crisis and then dropped significantly between 2008 and 2010. Between 2010 and 2016 the level of employment in industry has remained nearly constant. Afterwards a moderate increase could be observed. In the second quarter of 2020 the employment level in industry is dropped by several points as a result of the Covid-19 crisis. The fall in employment was however less pronounced than in the economic and financial crisis.

For a long time the development in trade and in services was relatively stable. Employment in trade (wholesale trade, retail trade and trade and repair of motor vehicles) displayed a slow but steady increase until early 2008 and then decreased for two years to stabilise again at the level which it had had around 2005. Just as in industry and construction, the employment level in trade dropped in the second quarter of 2020 but afterwards recovered again without however reaching the pre-crisis level.

In services, the financial economic crisis became visible in the employment data towards the end of 2008 but the decline lasted only about one year and a month and afterwards a still continuing steady increase set in which lasted until the first quarter of 2020. In the second quarter of 2020, the employment level in services dropped by more than 6 points and thus to a larger degree than during the whole financial crisis in 2008 and 2009. Moreover the recovery since then has been rather slow.

Figure 2 presents the development of the three labour input indicators for industry, Figure 3 for construction activities. In both cases the indicators for employment and for hours worked develop in a similar fashion, although during the financial crisis the indicator for hours worked dropped a bit faster than the indicators for the number of persons employed, suggesting that measures like the reduction of overtime were taken before dismissals or postponed recruitment. There is, however, a marked difference between these two quantity indicators and the development of the total gross wages and salaries. (Note that all labour input indicators are based on total numbers and not on average earnings or average working times.) 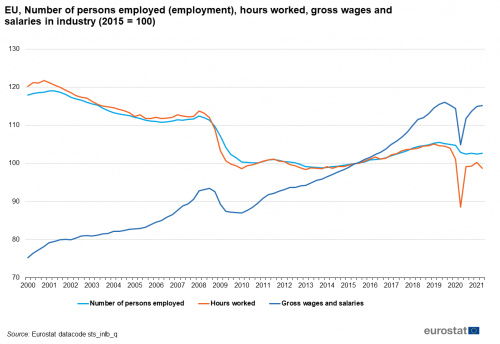 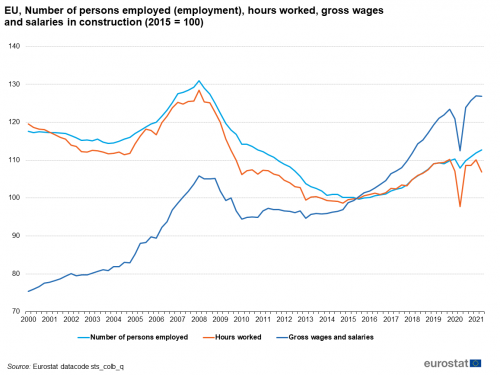 In construction, the indicators for gross wages and salaries steadily increased between 2000 and 2008. With the onset of the economic crisis, however, wages and salaries declined rapidly, as with hours worked and employment. Between 2010 and 2014, the indicator stagnated, since then it again displays a continuous increase which is, however, not as strong as during the pre-crisis years. As in industry, during the Covid-19 crisis employment figures dropped, however the declines were moderate in comparison with the declines in the hours worked and wages and salaries. Employment quickly recovered in the third quarter of 2020 and is now well above the pre-crisis level, the same is true for gross wages and salaries. The index of the amount of work done has show a somewhat slower recovery and even decreased again in the second quarter of 2021. 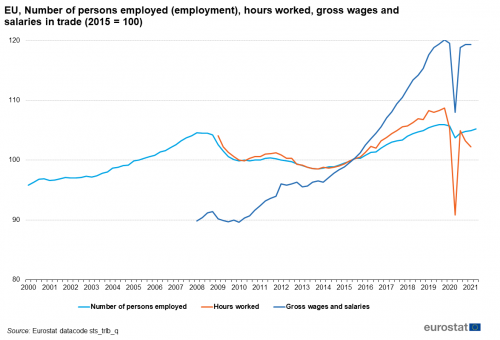 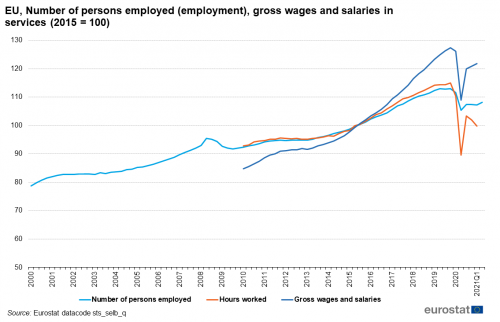 It is noteworthy that the declines in the labour indicators were not as marked in trade in services during the financial crisis 2008/2009 as for industry and construction. This was different, however, during the first half of 2020. The reduction in employment levels, in trade and services, was quite pronounced as large parts of these industries (e.g. hotels, restaurants, air traffic) were completely, or almost completely, shut down for a considerable amount of time. Employment plummeted by 5 index points in the first half of 2020. The falls in gross wages and salaries and in hours worked were even bigger. Not one of the three indicators has so far regained their former levels. The index for hours worked in trade shows a dramatic decline of 18 points during the first two quarter of 2020 since during the lockdown in many countries only essential stores (supermarkets, pharmacies, banks) remained open. With the roll-back of the drastic Covid-measures in the summer of 2020 work levels recovered in the third quarter of 2020, however without reaching the level before the peak of the crisis. During recent quarters the level of hours worked declined again. Gross wages and salaries also declined in a dramatic way but are by now almost back at the pre-crisis level.

For construction, employment levels increased in the large majority of countries during the years 2018 and 2019. For the EU the average increases were 3.6 % and 3.0 % respectively. Strong increases were observed in Ireland (12.1 % in 2018), Cyprus (13.9 % in 2018), and Hungary (18.9 % in 2019). Decreases were only observed in Malta (-1.0 % in 2018), Finland (-3.0 % in 2019), and in Greece (-19.7 % in 2019). In 2020 less than half of the EU countries experienced an employment decline in the construction sector (Bulgaria, Czechia, Estonia, Ireland, Greece, Spain, Latvia, Lithuania, Luxembourg, Hungary, Portugal, and Slovakia). Traditionally, the development in the construction sector is much more heterogeneous than in industry, trade or services. This can also be observed for the years 2019 and 2020 where some countries had negative two digit rates of change and other positive rates with a similar magnitude. In general however, the employment growth in 2020 was much more modest than in the years before (0.4 % in the EU and in the euro area).

For employment in trade, the development in 2018 and 2019 was in general positive (1.4 % and 1.2 % at EU level). A clear majority of countries recorded a positive growth during these years. In 2020 the development changed and a loss of 1.0  % of employment was recorded at EU level and also for the euro area. 20 out of 27 countries experienced a decline in the employment level, the countries that showed a positive (although often small) growth were Ireland, Greece, Luxembourg, the Netherlands, and Sweden. In Czechia and in Cyprus employment levels remained stable in 2020 compared with 2019. In general the differences between countries in the trade sector are less pronounced than in other sectors.

In services, employment figures developed quite positively in 2018 and 2019 (3.2 % and 2.0 % for the EU, 2.9 % and 1.7 % for the euro area). Several service sectors, notably air transport, hotels and restaurants were severely hit by the pandemic and shot-downs in almost all Member States. Consequently, the fall in employment in the service sector in 2020 was however quite strong (-4.4 % in the EU and -4.7 % in the euro area). In some countries the decline in service employment in 2020 even reached double-digit rates (-13.8 % in Bulgaria, -11.8 % in Greece) or came close to such magnitudes (-8.2 % in Latvia, -8.1 % in Ireland). The only country that recorded some growth was Poland (0.7 %). Note however, that data are not yet available for all EU-Member States. 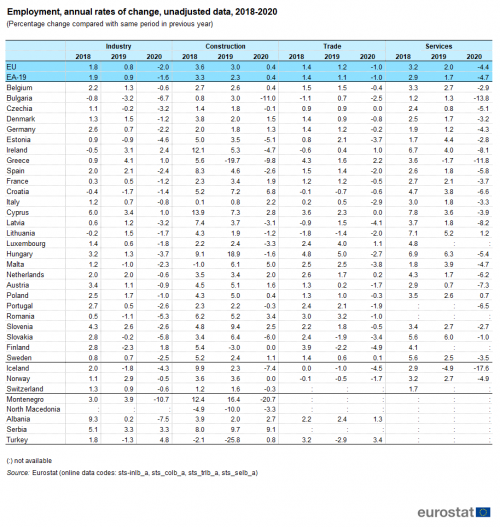 Development during the first quarters of 2021

Table 2 shows the most recent development of employment, hours worked and gross wages and salaries during the first two quarters of 2021. Note that at the moment data are not yet available for all countries.

The measure of hours worked is rather comprehensive, it not only includes the normal hours but also overtime, hours worked on holidays and time which is spent on the preparation of actual work, hours spent at the working place during which no actual work is done and even short periods of rest at the work place. Thus, in broad terms, hours worked represent hours paid. However, they do not include however hours paid but not worked (e.g. paid holidays or sick leave). They do also not include time spent for meal breaks or time for commuting between home and work place. With the Regulation (EU) No 2019/2152 of 27 November 2019 (European Business Statistics Regulation) and the Commission Implementing Regulation (EU) No 2020/1197 of 30 July 2020 the hours worked encompass only the hours worked by employees but not the hours worked by self-employed.

The indicators of wages and salaries include all remuneration in cash or in kind in exchange for work including bonuses, allowances and similar payments. Social contributions payable by the employee are also included even if they are withheld and transferred to the authorities by the employer. Not included are social contributions payable by the employer, payroll taxes or expenses related to services provided by agency workers. The statistical sources used to establish STS labour input data vary. In some cases special surveys are used, in others data are collected from administrative sources.

The STS regulation requires that Member States collect labour input data and transmit them to Eurostat at least quarterly. However for several Member States data are also available on a monthly basis ( (sts_inlb_m), (sts_colb_m), (sts_trlb_m), (sts_selb_m) ).

Employment is a variable that is important in both economic and social statistics. Labour input is one of the main costs of production. Employment, in its own right, is an important short-term indicator in monitoring the economy. The proportion of the working population in employment, the type of job they do and their working patterns are social variables of interest. The collection of short-term information on employment has a number of important uses:

The collection of information in all the Annexes of the STS-regulations give a broad economic picture and shows the balance between services and industry. Note however that to a large extent, services in STS are business services, i.e. services consumed by business like market research, business consultancy, employment activities and also transport and communication but not public services or financial services.