This article describes the development of trade in cars. The car industry is of prime importance to the economy of the European Union (EU) and plays a major role in international trade. 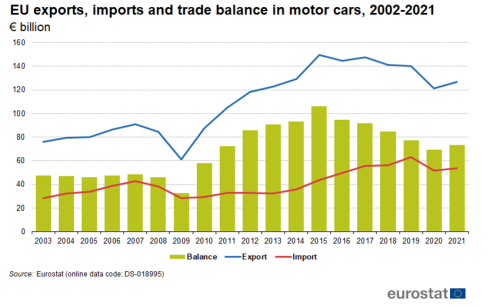 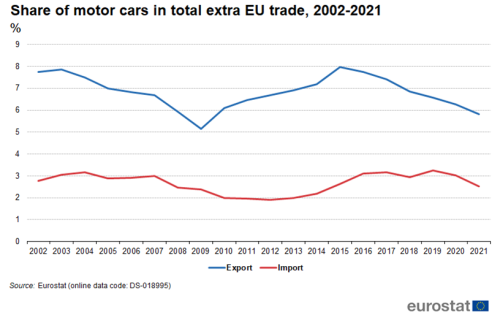 In 2021, the United States was the main export destination of EU's cars (20 % of the total), ahead of the United Kingdom, China (both 17 %), Switzerland, South Korea, Japan (all 5 %) and Turkey (4 %). These seven partners made up almost three quarters of extra-EU exports of cars.

With 15 %, the United States and United Kingdom were the main origin of extra-EU imports, ahead of South Korea, Japan (both 13 %), Turkey, China (both 11 %) and Mexico (9 %). Together the top seven made up 88 % of all extra-EU imports of cars. It should be noted that exports and imports relate to production within the corresponding country, regardless of the nationality of the factory. 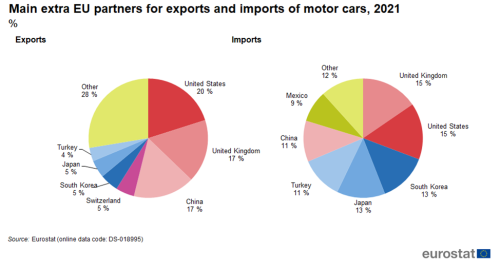 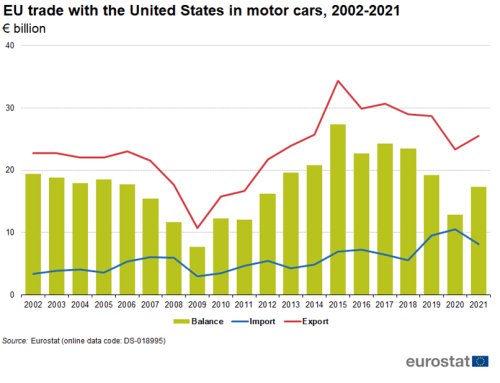 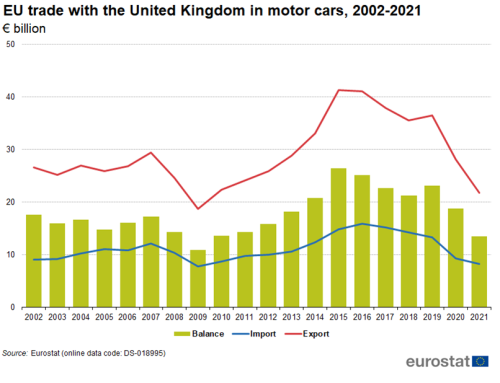 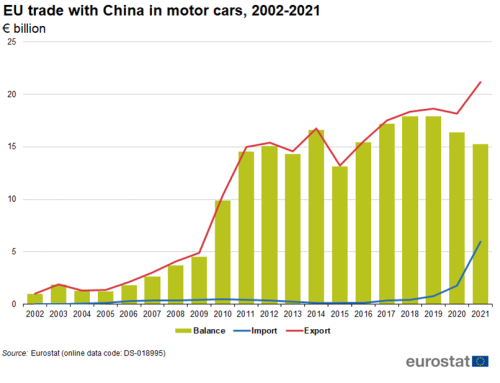 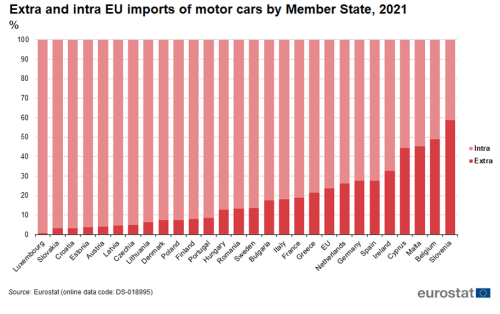 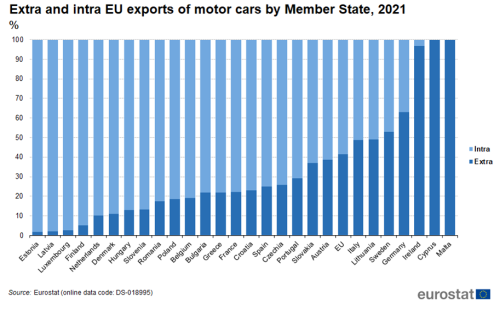 Germany is the EU's largest exporter of cars

Looking at the trade in cars by individual Member State, Germany alone was responsible for three fifths of the EU total exports in 2021 (Table 1). In relative terms, i.e. compared to their total extra-EU export, cars represented 12.2 % of Germany's total exports. This share was surpassed only by Slovakia (48.0 %) and Czechia (13.7 %) which were the only other Member States whose share of cars in total exports of goods was higher than 10 %. 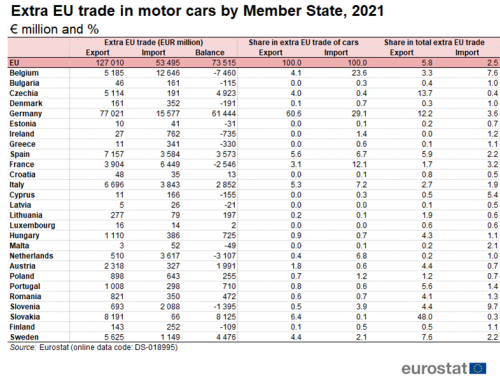 The subcategory 'motor cars and other motor vehicles for transporting persons', described above as cars, is one of the six subcategories that make up the category road vehicles. Total exports of road vehicles in 2021 were worth €214.4 billion and their imports were worth €101.5 billion. Exports of cars (€127.0 billion) made up 59 % of road vehicles while imports of cars (€53.5 billion) were 53 % of imports (Figure 9). 'Parts and accessories of motor vehicles' followed with exports of €53.7 billion (25 %) and imports of €23.5 billion (23 %). 'Motor vehicles for the transport of goods and special-purpose motor vehicles’ had exports of €17.3 billion (8 %) and imports of €6.7 billion (7 %). 'Motor cycles and cycles, motorized and non-motorized; invalid carriages' is the only subcategory where the EU had a trade deficit which amounted to €8.3 billion in 2021. 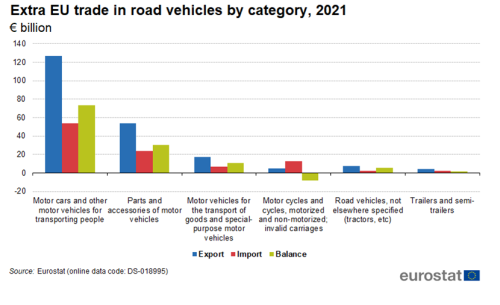 COMEXT is the Eurostat reference database for international trade in goods. It provides access not only to both recent and historical data from the EU Member States but also to statistics of a significant number of non-EU countries. International trade aggregated and detailed statistics disseminated from Eurostat website are compiled from COMEXT data according to a monthly process. Because COMEXT is updated on a daily basis, data published on the website may differ from data stored in COMEXT in case of recent revisions.

European statistics on international trade in goods are compiled according to the EU concepts and definitions and may, therefore, differ from national data published by Member States.

Unit of measure Trade values are expressed in millions of euros. They correspond to the statistical value, i.e. to the amount which would be invoiced in case of sale or purchase at the national border of the reporting country. It is called a FOB value (free on board) for exports and a CIF value (cost, insurance, freight) for imports.