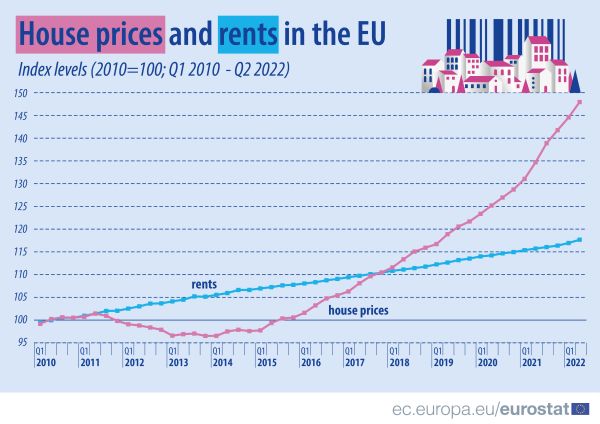 This article describes the house price index (HPI) in the euro area (EA19) and the European Union (EU), presenting data on this indicator both at European and Member State level. It also provides examples of possible use of this indicator in relation to other statistics, such as consumer price indices and rent price indices. Finally, a summary description of the methodology used in the compilation of the HPI is given.

Table 1 presents the quarterly and annual rates of change for the HPI for the most recent four quarters. 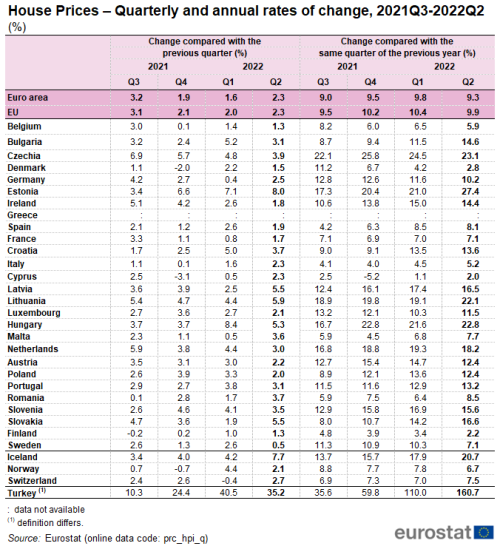 Dynamics in the housing market: uses of the house price index and policy implications

The HPI has been used in conjunction with other macroeconomic statistics to build derived indicators for the analysis of the housing market dynamics.

A well-known example is the deflated (or real) house price index, which is part of the Scoreboard of indicators used in the Macroeconomic Imbalances Procedure (MIP) of the European Commission. See the dedicated section on Eurostat website and ECFIN web page.

The deflated HPI is the ratio between the nominal HPI and an index of consumer price inflation. A consumer price index, such as the HICP, or a national accounts final consumption deflator can be used for stripping out consumer prices inflation from the HPI. The deflated HPI included in the MIP Scoreboard and in this publication uses the national accounts household final consumption deflator. The deflated HPI growth rate is a key variable for the analysis of house price cycles. In particular, a too high growth rate is considered an early warning indicator of tensions in the real estate market signalling the risk of price bubbles. The alarm threshold adopted in the context of the MIP is 6 % of annual growth rate in the deflated HPI. The level of the threshold was established by the European Commission. It was set on the basis of an analysis of historical data on past boom and bust cycles of house prices.

The deflated HPI for the euro area is presented in Figure 3 (quarterly index) and Figure 4 (annual rate of change).

There are significant differences between Member States, as can be seen in Table 2 (annual deflated HPI). Figure 5 illustrates the magnitude of the differences in the annual rate of change for the year 2021. 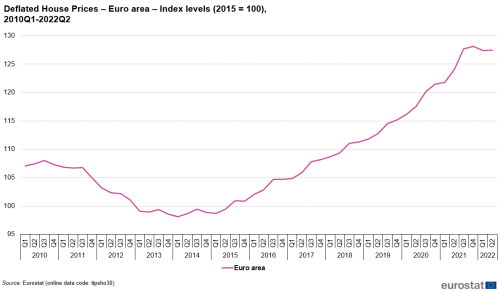 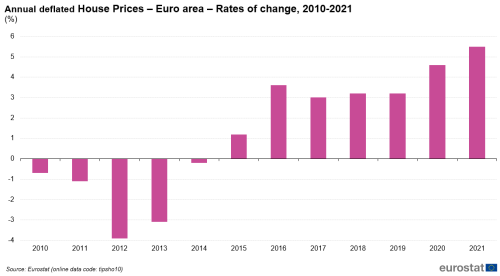 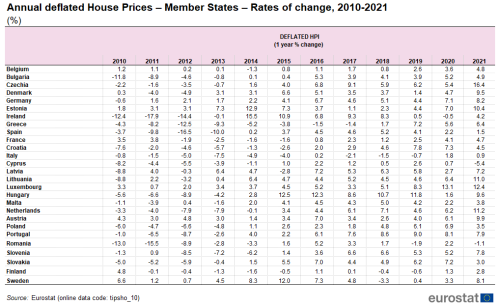 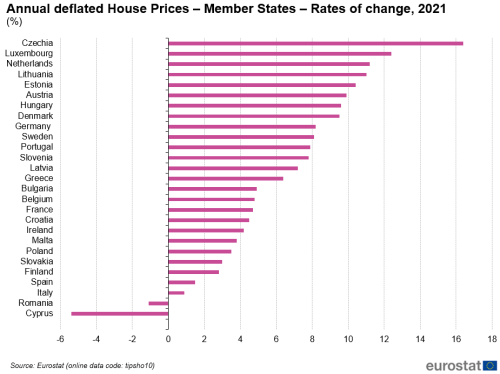 Figures 6 and 7 below show the long term trends of house prices and rents (since 2010). 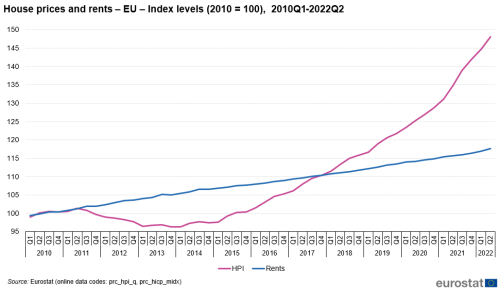 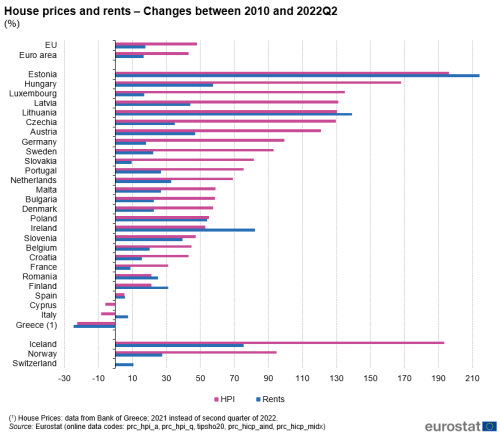 Weights for the calculation of house price indices

Weights for the euro area and the EU

The House Price Indices (HPI) for the euro area and EU aggregates are calculated as weighted averages of the national HPIs, currently using as weights the GDP at market prices (based on PPS) of the countries concerned. The weights used in 2022 are based on data for 2021.

HPIs are computed as Laspeyres-type annual chain indices allowing weights to be changed each year.

Figure 8 shows the 2021 weights used for the calculation of the 2022 EU HPI aggregates. 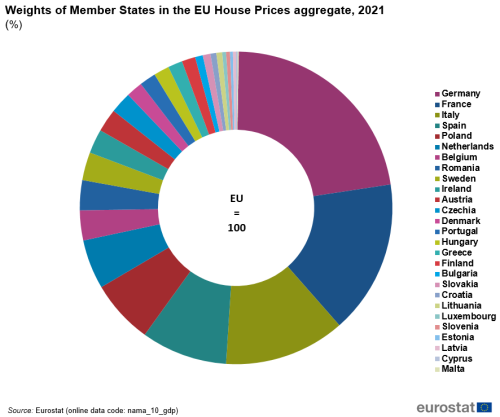 Figure 9 shows the 2021 weights used for the calculation of 2022 the euro area HPI aggregates. 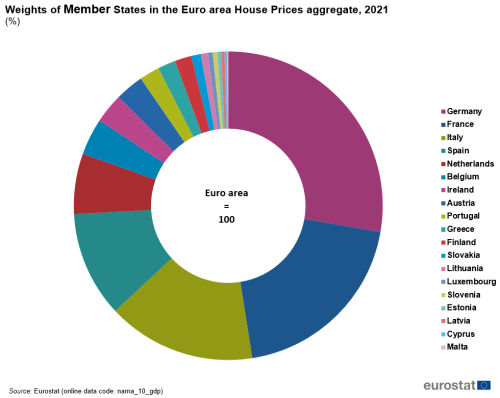 Methodological background information is given in the Handbook on Residential Property Prices Indices (RPPIs) and and the Technical Manual on Owner-occupied Housing and House Price Indices.

The first and most important issue in the compilation of HPI is the availability of data on dwelling purchases. This refers to information about the price of the transaction and the dwelling characteristics. The dwelling characteristics which most influence price are the type of dwelling (flat, detached house, terraced house, etc.), its size and location. A second issue is the heterogeneity of the housing market, where virtually every dwelling bought and sold is different from the others in some respect. The consequent quality adjustment from one time period to the next is also a major methodological issue in compiling house price indices. The HPI should be seen as an independent price index aimed at measuring price developments for dwellings transacted in the market. The main technical characteristics of the HPI are:

Prices cover the acquisition cost of a property in itself, and not the total cost that is necessary to acquire, own and maintain a residential property; so other costs related to the acquisition of the property and major repairs are ruled out from its scope.

The basic act providing for the compilation of the House price index (HPI) and the Owner-occupied housing price index (OOHPI) is the European Parliament and Council Regulation (EU) 2016/792 of 11 May 2016.

In the context, of this publication, the terms 'residential property price', 'house price' and 'dwelling price' are used interchangeably to describe the price developments of all residential properties purchased by households (flats, detached houses, terraced houses, etc.), both new and existing, independent of their final use and independent of their previous owners. The emphasis is on market prices, with non-market prices being ruled out from the scope of the house price indices (self-build dwellings are therefore excluded). The price of dwellings follows a gross acquisition concept, i.e. it includes the land price component.