Hours of work and absences from work - quarterly statistics 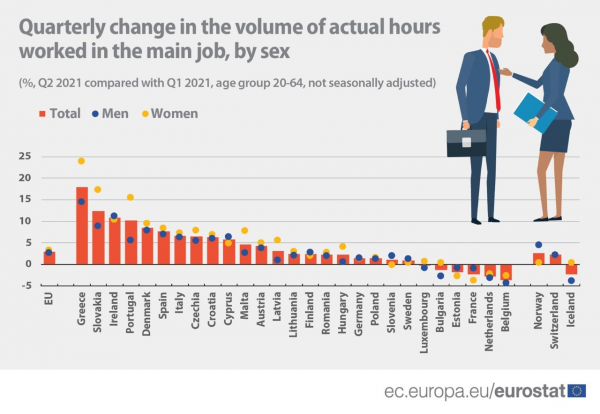 This article aims to describe the quarterly change in the hours actually worked by employed people (aged 20 to 64 years) in their main job in the first half of 2021 in the European Union (EU) as a whole, for all EU Member States individually, as well as for three EFTA countries (Iceland, Norway and Switzerland) and one candidate country (Serbia).

Statistics on the volume of working hours provides an economic perspective to employment as it represents an estimate for the labour input to the production. Reporting on quarterly data allows for a short-term assessment of shocks on the working life and economy.

Results presented in this article come from the EU Labour Force Survey (LFS). Since the first quarter of 2021, all countries participating in the survey have harmonised their questionnaire with regard to the collection of the working hours; this information is consequently collected in the same way in all countries, ensuring enhanced comparability and quality of the results.

This article is part of the online publication Labour market in the light of the COVID-19 pandemic - quarterly statistics.

Differences in the length of the actual working week

In the EU, during the second quarter of 2021, employed people, aged 20-64, spent in work 36.2 hours on average per week. This number refers to the hours people have actually spent in work activities in the main job during the surveyed reference week. Note that the "actual hours of work" can differ from the "usual hours of work", which are the modal value of the actual hours worked per week over a long reference period (one to three months), excluding weeks when an absence from work occurs (e.g. holidays, leaves, strikes, etc.).

The EU average of the actual working hours per week hides many differences among countries (see Map 1). The longest weeks of work among the EU Member States, of 39.5 hours or more, were found in Poland (39.5 hours), Romania (39.7 hours) and Greece (40.2 hours). However, even a longer working week was found outside the EU, namely in Serbia, with 42.5 hours of work on average. In contrast, the shortest weeks, of less than 35.5 working hours, were observed in Finland (35.4 hours), Denmark and France (both with 35.3 hours), Belgium (34.6 hours), Germany (34.2 hours), Austria (33.3 hours) and the Netherlands (31.5 hours). The EFTA country Norway (33.8 hours) also stands out with a relatively short working week. 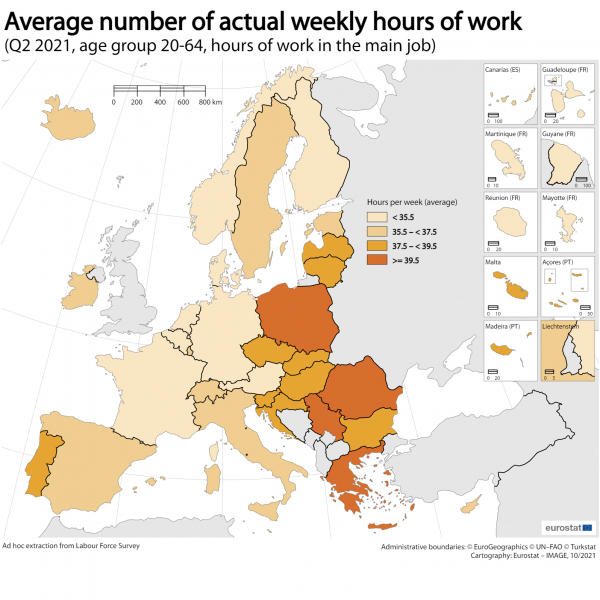 Map 1 reveals a clear geographical pattern in the length of the average working week, as the Eastern and Southern countries tend to have more hours of work per week than the Western and Northern countries.

Number of hours of work increased in most countries

The increase in the volume of hours of work in Greece, Slovakia and Portugal between Q1 and Q2 2021 was primarily due to an increase in the total number of hours worked by women, i.e. +23.9 %, +17.3 % and +15.5 % respectively. These increases are also the highest among EU countries considering both sexes. Men in these three countries also experienced an increase in their total number of working hours, however, with a much lower magnitude, of +14.5 %, +8.9 % and +5.6 % respectively. Furthermore, those three countries stood out with the most substantial gender differences in the quarterly development in the number of working hours between the first two quarters of 2021.

Impact of absences from work

The share of total absences also dropped in other 16 EU countries between the first two quarters of 2021 but to a lesser extent. In contrast, some Member States recorded a rise in the proportion of absences from Q1 to Q2 2021; among those, the Netherlands (+1.8 p.p.), Estonia (+1.5 p.p.) and Sweden (+1.1 p.p.) stood out with the highest increases.

The share of absences from work was higher for women than for men in all EU countries in Q1 and Q2 2021. Czechia, Slovakia and Hungary had the widest gender gaps in the first half of 2021, whereas Malta had the narrowest.

In addition to the level of absences from work, the level of employment also influences the volume of working hours. Further information on the employment situation in Q1 and Q2 2021 can be found in the quarterly articles on employment and employed people and job starters by economic activity and occupation.

Own-account workers with the highest increase

Figure 3 displays the quarterly development in the total number of working hours by professional status between Q1 and Q2 2021. The self-employed people without employees (also known as own-account workers) had the sharpest increase (+9.9 %) in the EU. Own-account workers were followed by self-employed with employees (known as employers) and employees who gained respectively, a 6.1 % and 2.0 % increase in working hours between the first two quarters of 2021. 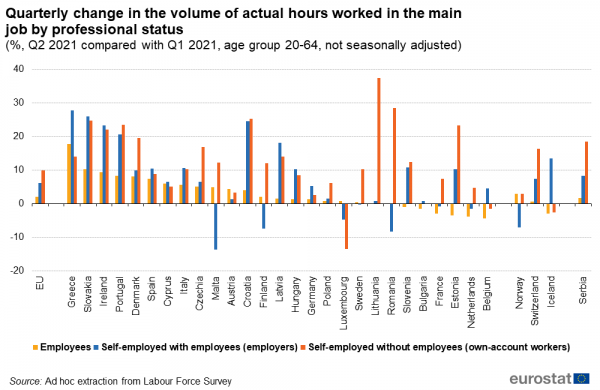 The vast majority of EU Member States (24 out of 27 countries) reflected the global increase at EU level in the number of hours of work for the own-account workers. Lithuania (+37.3 %), Romania (+28.5 %) and Croatia (+25.3 %) recorded the highest increases, of more than one-quarter. On the other hand, Bulgaria (-0.2 %) and Belgium (-1.5 %) recorded a mild drop in the number of working hours for that group of workers, whereas Luxembourg (-13.5 %) had a more substantial decrease.

Hours worked went up sharply in the accommodation and food services

All in all, 14 out of 17 sectors of the economy registered an increase in the number of working hours from Q1 to Q2 2021. The exceptions were human health and social work activities (-0.8 %), public administration and defence (-1.2 %) and financial, insurance and real estate activities (-2.0 %), which showed a slight decrease between the first two quarters of 2021. 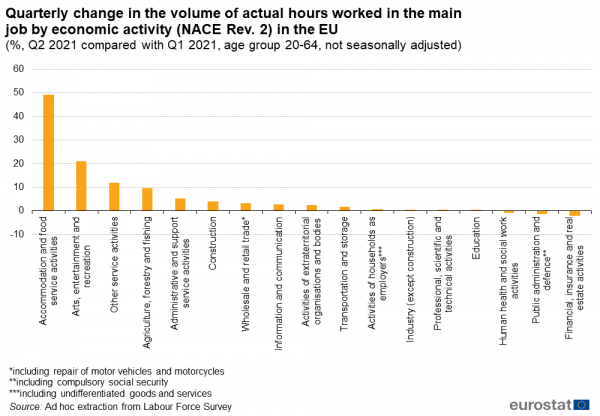 In the majority of EU countries (21 out of 27), the accommodation and food services sector ranked as the sector with the highest or second-highest increase in the number of working hours between Q1 and Q2 2021 (see Figure 5). The increase in this sector was more than two-fold in Portugal, Cyprus and Croatia, and more than three-fold in Greece.

Increase for all occupational groups

Between Q1 and Q2, at EU level, the occupational groups (ISCO-08) of skilled agricultural, forestry and fishery workers (+14.1 %) and service and sales workers (+10.6 %) experienced the highest increase in the total number of hours worked (see Figure 6). The group of people having elementary occupations (+4.8 %) also had a relatively high increase. All occupational groups considered in Figure 6 showed an increase in the number of working hours from Q1 to Q2 2021. However, for some groups, the increase was very slight, namely for professionals (+0.2 %) and technicians and associate professionals (+0.1 %). 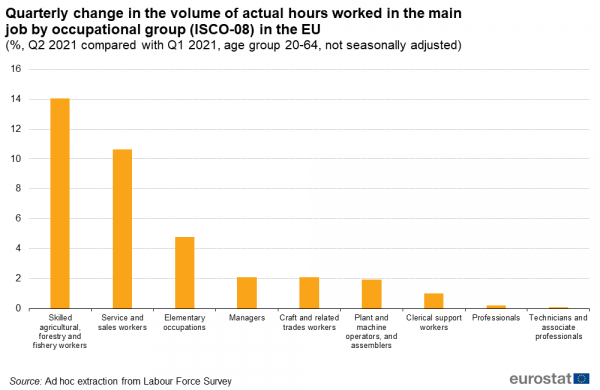 Figure 6: Quarterly change in the volume of actual hours worked in the main job by occupational group (ISCO-08) in the EU
Source: Eurostat, ad hoc extraction from Labour Force Survey

When analysing the results presented in this article, one should keep in mind the potential seasonal effect on the quarterly development from Q1 to Q2 2021. For example, part of the increase in the volume of working hours for the skilled agricultural, forestry and fishery workers might be explained with the transition from the winter to the spring season, which is in general more favourable for agricultural work.

All figures in this article are based on quarterly results from the European Union Labour Force Survey (EU-LFS).

Source: The European Union Labour Force Survey (EU-LFS) is the largest European household sample survey providing mostly quarterly and annual results on labour participation of people aged 15 and over as well as on persons outside the labour force. It covers residents in private households. Conscripts in military or community service are not included in the results. The EU-LFS is based on the same target populations and uses the same definitions in all countries, which means that the results are comparable between countries.

European aggregates: EU refers to the sum of the EU-27 Member States. If data is unavailable for a country, the calculation of the corresponding aggregates is computed with estimates. Such cases are indicated.

Country note: Spain and France have assessed the attachment to the job and included in employment those who have an unknown duration of absence but expect to return to the same job once the COVID-19 measures in place are lifted.

Eight different articles on detailed technical and methodological information are available from the overview page of the online publication EU Labour Force Survey. Detailed information on coding lists, explanatory notes and classifications used over time can be found under documentation.

The COVID-19 pandemic hit Europe in January and February 2020, with the first cases confirmed in Spain, France and Italy. COVID-19 infections have been diagnosed since then in all European Union (EU) Member States. To fight the pandemic, EU Member States have taken a wide variety of measures. From the second week of March 2020, most countries closed retail shops, with the exception of supermarkets, pharmacies and banks. Bars, restaurants and hotels were also closed. In Italy and Spain, non-essential production was stopped and several countries imposed regional or even national lock-down measures which further stifled economic activities in many areas. In addition, schools were closed, public events were cancelled and private gatherings (with numbers of persons varying from 2 to over 50) banned in most EU Member States.

The majority of the preventive measures were initially introduced during mid-March 2020. Consequently, the first quarter of 2020 was the first quarter in which the labour market across the EU was affected by COVID-19 measures taken by the Member States.

In the following quarters of 2020 and 2021, the preventive measures against the pandemic were continuously lightened and re-enforced in accordance with the number of new cases of the disease. New waves of the pandemic began to appear regularly (e.g. peaks in October-November 2020 and March-April 2021). Furthermore, new strains of the virus with increased transmissibility emerged in late 2020, which additionally alarmed the health authorities. Nonetheless, as massive vaccination campaigns started all around the world in 2021, people began to anticipate improvement of the situation regarding the COVID-19 pandemic.

Statistics on the hours of work add a new dimension to employment. The “average number of actual weekly hours of work in the main job” is an indicator aiming to give a perspective to the social conditions of labour, while the volume of hours worked adds an economic perspective, insofar as it serves as a proxy for the labour input to the production. The quarterly data on hours of work allows to regularly report on the impact of the crisis due to the COVID-19 pandemic on the working life and economy.

Please note that in this exceptional context of the COVID-19 pandemic, employment and unemployment as defined by the International Labour Organisation (ILO) might not be sufficient to describe the developments taking place in the labour market. In the first phase of the crisis, active measures to contain employment losses led to absences from work rather than dismissals, and individuals could not look for work or were not available due to the containment measures, thus not counting as unemployed. Only referring to unemployment might consequently underestimate the entire unmet demand for employment, also called the labour market slack, which is further analysed, with namely the evolution of the employment and the recent job starters, in the publication Labour market in the light of the COVID-19 pandemic.