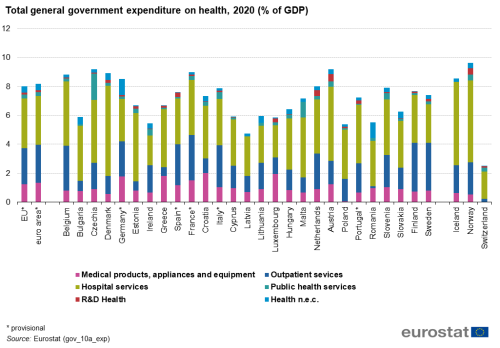 This article analyses data on general government total expenditure on 'health' (according to the Classification of the Functions of Government - COFOG). It is part of a set of statistical articles based on Government expenditure by function. 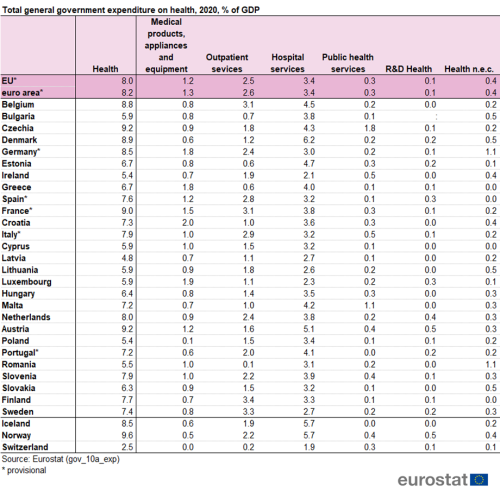 Looking at a more detailed breakdown for the EU in 2020, 'hospital services' accounted for 3.4 % of GDP, 'outpatient services' for 2.5 % of GDP and 'medical products, appliances and equipment' for 1.2 % of GDP.

At the level of the EU, general government 'health' expenditure increased relatively smoothly between 1995 and 2020, amounting to 11.1 % of total expenditure in 1995 and 15.1% in 2020. As a ratio to GDP, EU government health expenditure amounted to 5.9 % of GDP in 1995 and 8.0 % of GDP in 2020. In 2020, the ratio to GDP increased by one percentage point as compared to 2019 resulting in the highest ratio in the available time series. The high amount reported in 2020 is due to both a decrease in nominal GDP and an increase in government expenditure on health (increase of + €95 billion compared to 2019) related to the COVID-19 pandemic.

For 'health', the groups are