General government expenditure in the EU on economic affairs represented 6.1 % of GDP in 2020. 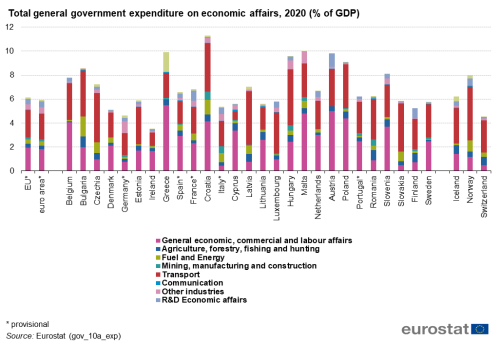 As regards government expenditure on economic affairs at the level of the reporting countries, there is considerable variation over time as the amounts recorded may be influenced by operations of an extraordinary nature, such as disposal of non-financial non-produced assets recorded as negative expenditure, capital injections recorded as capital transfers, notably benefiting financial institutions and other categories of capital expenditures such as guarantee calls. Furthermore the majority of subsidies granted to producers are recorded in this division.


In 2020 in the EU, total expenditure of general government on 'economic affairs' represented 6.1 % of GDP - a large increase compared to 2019 (4.4 % of GDP). For the year 2020 the division 'economic affairs' was highly impacted by the COVID-19 pandemic and government measures to mitigate its effects, most notably by furlough schemes recorded as subsidies to the employer and capital injections recorded as capital transfers.

There are considerable variations at the level of Member States.

Within the division 'economic affairs', the highest ratio to GDP represented expenditure related to 'transport' (2.3 % of GDP), followed by expenditure on 'general economic, commercial and labour affairs' with 1.9 % of GDP. Research and development related to economic affairs as well as 'fuel and energy' accounted for 0.4 % of GDP in 2020. 'Agriculture, forestry and fishing' made up 0.3 % of GDP, 'mining, manufacturing and construction' accounted for 0.2 % of GDP and expenditure not elsewhere classified amounted to 0.1 % of GDP. 'Communication' had a minor share in the division of only 0.04 % of GDP. Expenditure related to 'other industries' amounted to 0.5 % of GDP.

In the EU, a large part of expenditure on agriculture, forestry and fisheries falls within the competency of the EU, meaning that expenditure of national governments in this group tends to be smaller in comparison with EFTA and other countries. Iceland and Switzerland record 0.7 % of GDP in this group.

Capital injections into financial institutions recorded as capital transfers explain the relatively high figures for some countries over the time period. Such expenditure is recorded in COFOG group 'general economic, commercial and labour affairs'.

In 2020, government expenditure reported by countries on economic affairs ranged between 3.5 % of GDP and 11.3 % of GDP 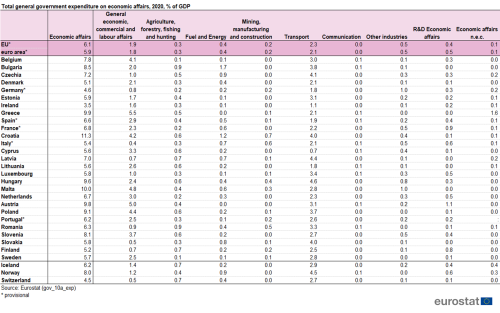 The importance of the 'economic affairs' division is highly dependent on the amount of subsidies given to public or private transportation companies. Expenditure of transport companies (including those responsible for transport infrastructure) that are classified within the general government sector are even more important contributors to this function group. In particular capital investments (gross capital formation) is dominant in this group. In 2020, the highest expenditure to GDP ratios for 'transport' were recorded in Hungary (4.6 %), Latvia (4.4 %), Czechia (4.1 %), Croatia and Slovakia (4.0 %), as well as Norway (4.5 %). By contrast, the lowest level of expenditure in 'transport' in relation to GDP was observed in Cyprus (0.7 %).

Overall, EU general government expenditure grew from €6 521 billion in 2019 to €7 118 billion in 2020, with increases observed across all main functions of expenditure. However, the strongest relative increase was observed for expenditure on economic affairs, mostly due to government measures taken to counter the economic effects of the COVID-19 pandemic, for example by providing subsidies to businesses affected by the pandemic, capital injections (e.g. for transport companies) and furlough schemes (insofar as these are recorded as subsidies, that is considered to primarily provide general support to the labour market - some furlough schemes are recorded in social protection if they are deemed to primarily support the affected employees). At the level of the EU, expenditure on economic affairs increased by €206 billion between 2019 and 2020 (from €615 billion to €821 billion), implying that roughly one third of the overall increase in general government expenditure was due to economic affairs spending. Consequently, the share of 'economic affairs' expenditure in total expenditure increased from 9.4 % in 2019 to 11.5 % in 2020, to reach the highest share since 1995.

Subsidies most important form of expenditure within economic affairs

In 2020, at the level of the EU, subsidies formed the most important part of expenditure on economic affairs, within a share of 37.9 %, followed by capital investments (18.4 %), intermediate consumption (14.1 %), capital transfers (13.4 %) and compensation of employees (wages, salaries and employers' social contributions).

For 'economic affairs', the groups are