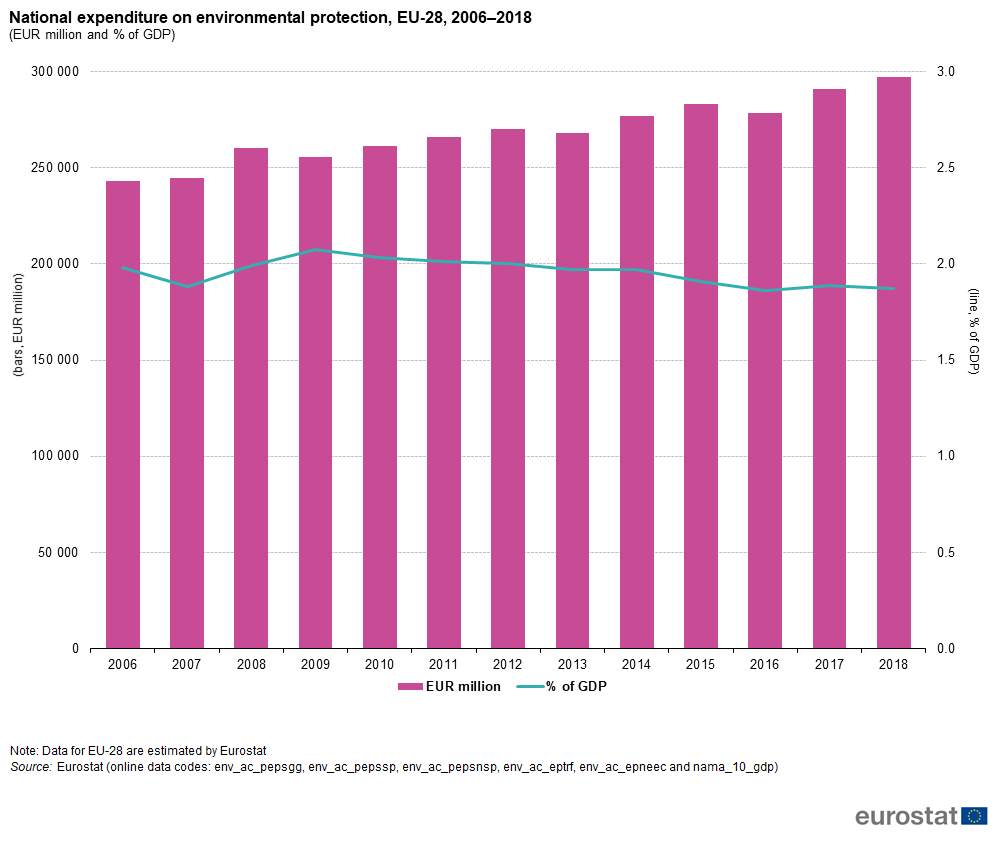 This article presents results of the 2018 data collection on environmental protection expenditure accounts (EPEA) provided by European Union (EU) Member States with reporting obligation (Cyprus was granted a derogation) and selected non-EU countries. It provides information on the EU's expenditure on prevention, reduction and elimination of pollution or any other degradation of the environment and covers the total spending by a country ( i.e. by its households, businesses and government) on environmental protection services, e.g. waste and wastewater management, protection of biodiversity, as well as protection of soil, research and development, education and training,

More information about the supply of environmental protection products is provided based on the environmental goods and services sector accounts data (EGSS): see the articles on environmental economy — employment and growth.

In 2018, EU-28 national expenditure on environmental protection of all EU Member States amounted to EUR 297 billion, according to Eurostat's estimates.

As percentage of gross domestic product (GDP), EU-28 NEEP remained relatively stable between 2006 and 2018. In 2006 the share amounted to 2.0 %, a small increase to 2.1 % of GDP is observed in 2009, mainly as a result of a large GDP contraction during the financial crisis and economic recession, stabilizing at around 1.9 % from 2015 onwards.

Over the half (57 %) of the EU-28 final consumption expenditure on environmental protection services, around EUR 66 billion, was covered directly by households. The remaining 43 %, around EUR 50 billion, was spent by general government and non-profit institutions serving households (NPISH) to produce environmental protection services which were then provided to all citizens for free or at a price that is not economically significant.

Between 2006 and 2018, households' expenditure on environmental protection expenditure services increased by nearly 50 % over the entire period, which is equivalent to an average annual growth rate of 3.4 % (see Figure 2, left scale). Still, environmental protection accounted for a very small proportion of households' spending (less than 1 %), and this share remained stable over the recent decade (see Figure 2, right scale). 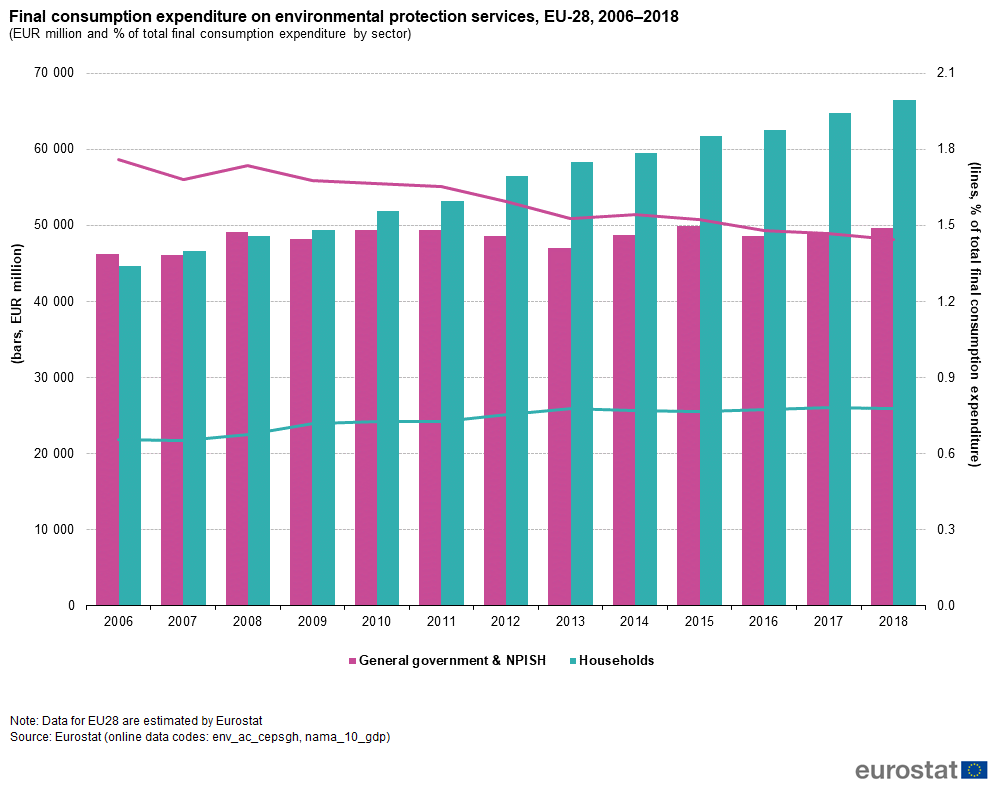 Figure 3 presents the share of the environmental protection expenditure in the final consumption of general government and NPISH sectors across the EU. In 2016, the last mandatory year for data reporting, the EU-28 share amounted to 1.5 %, and for the large majority of Member States the share ranged between 1 % and 3 %. 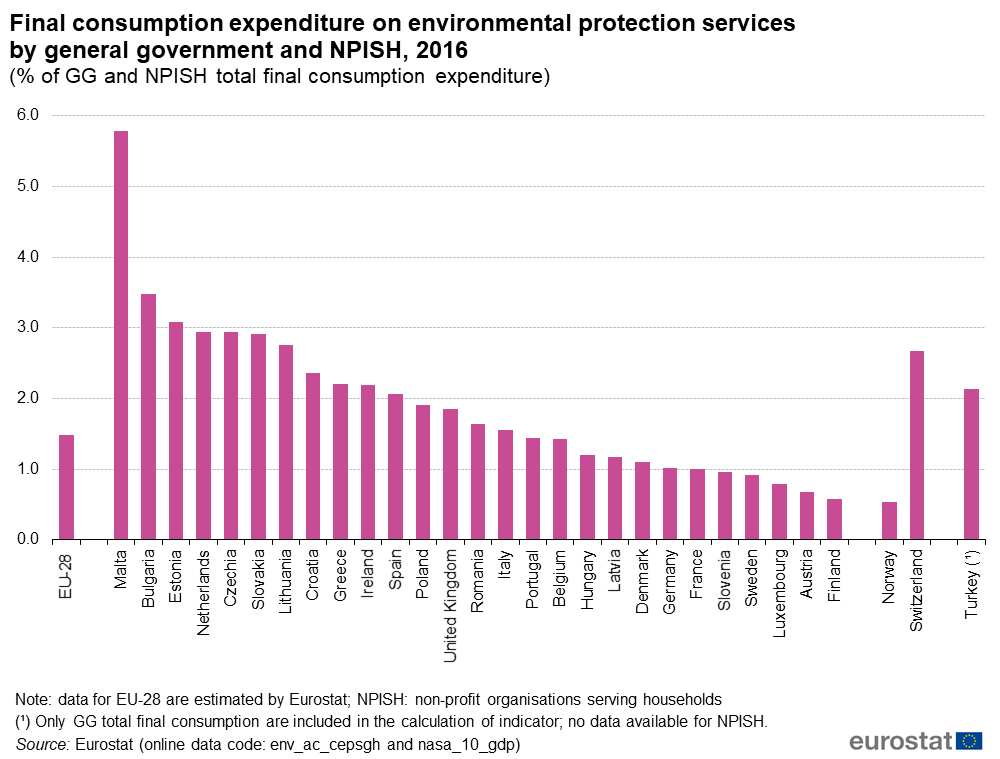 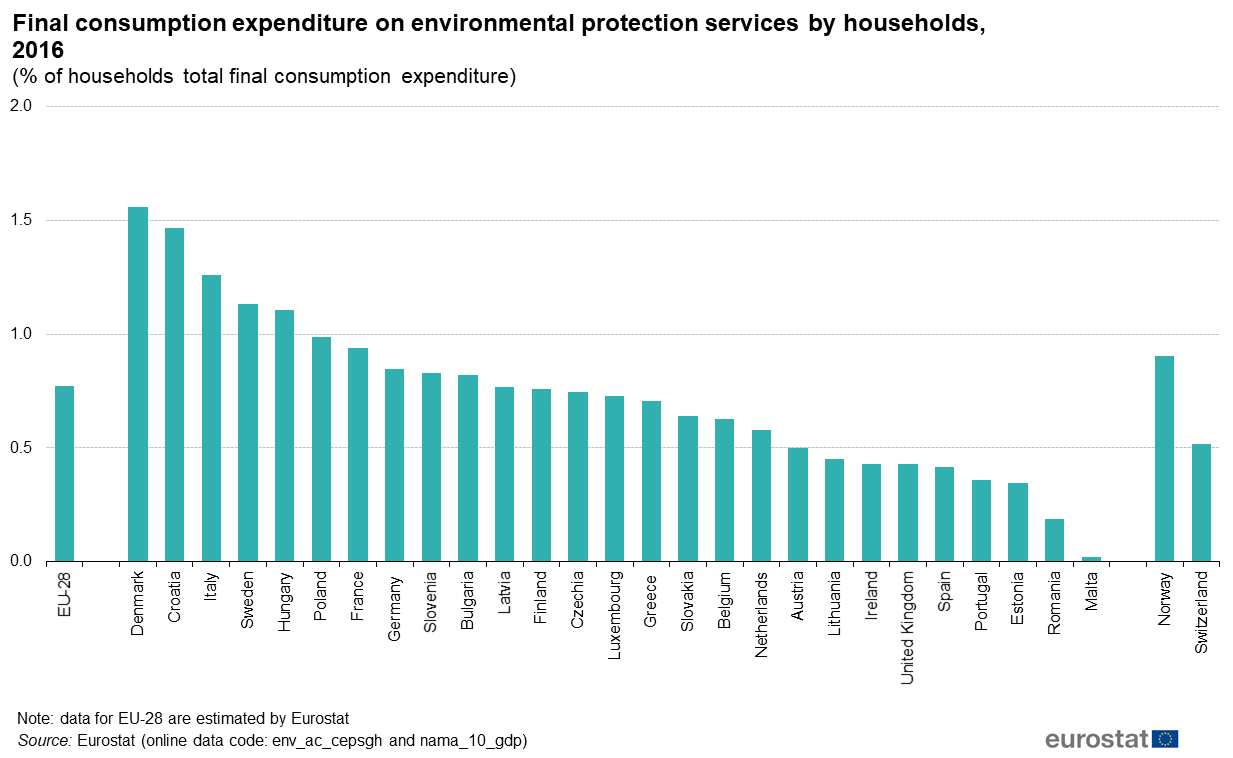 Still, between 2006 and 2018, investments of the corporations decreased by 8.4 %, whilst they remained relatively stable for general government and NPISH (see Figure 5).

The share of environmental protection investments in total investments of corporations is relatively low. In 2018, it amounted to 1.8 %, having decreased by 0.8 percentage points since 2006. The equivalent share for general government and NPISH sector was larger: it amounted to 5.9 % in 2018, having decreased by 0.9 percentage points since 2006 (see Figure 5). 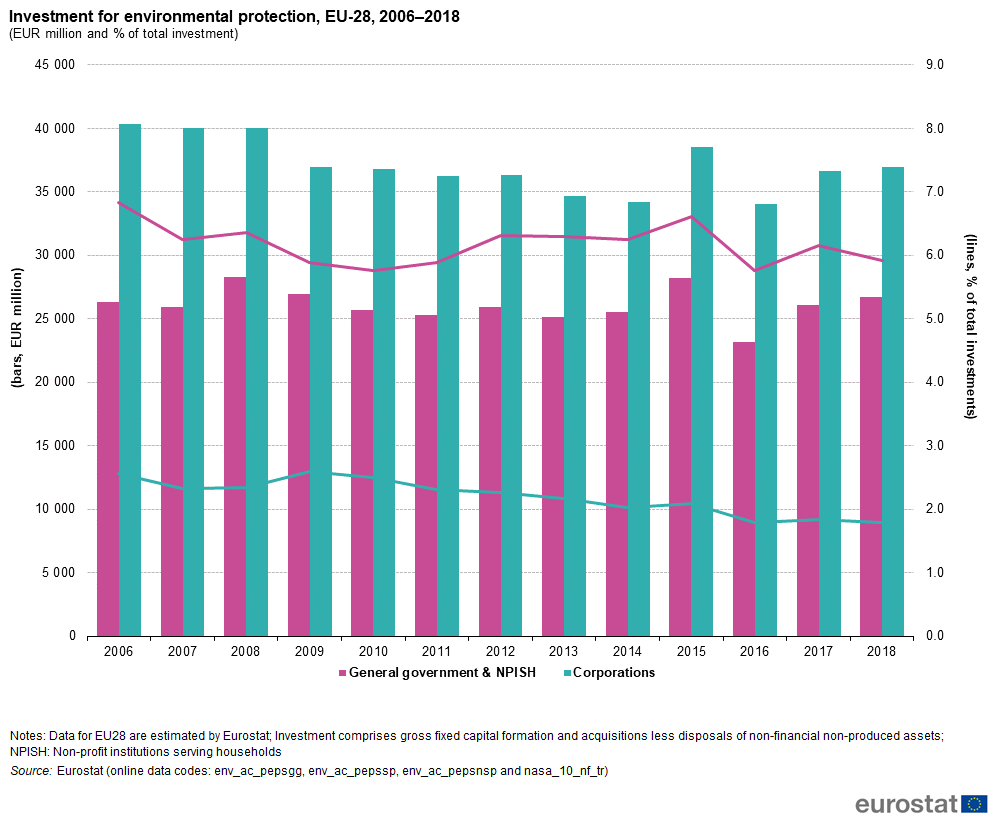 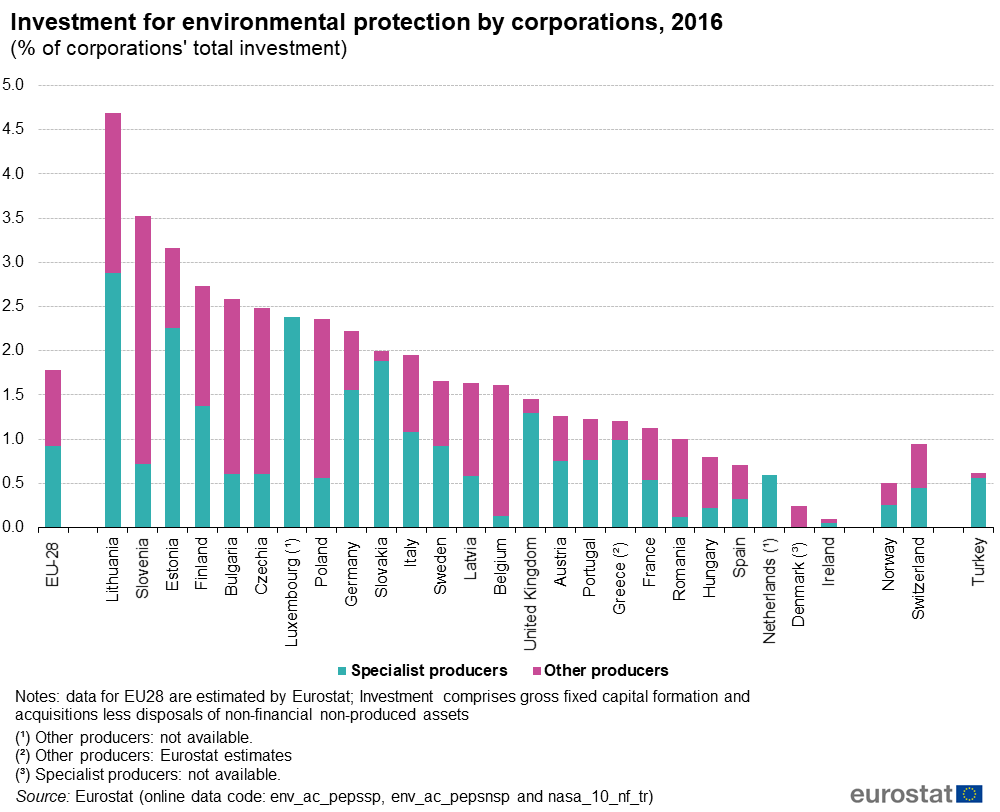 Even larger variations were observed for the general government and NPISH sectors, the shares ranging from 0.2 % to 11.2 % across the EU (see Figure 7). 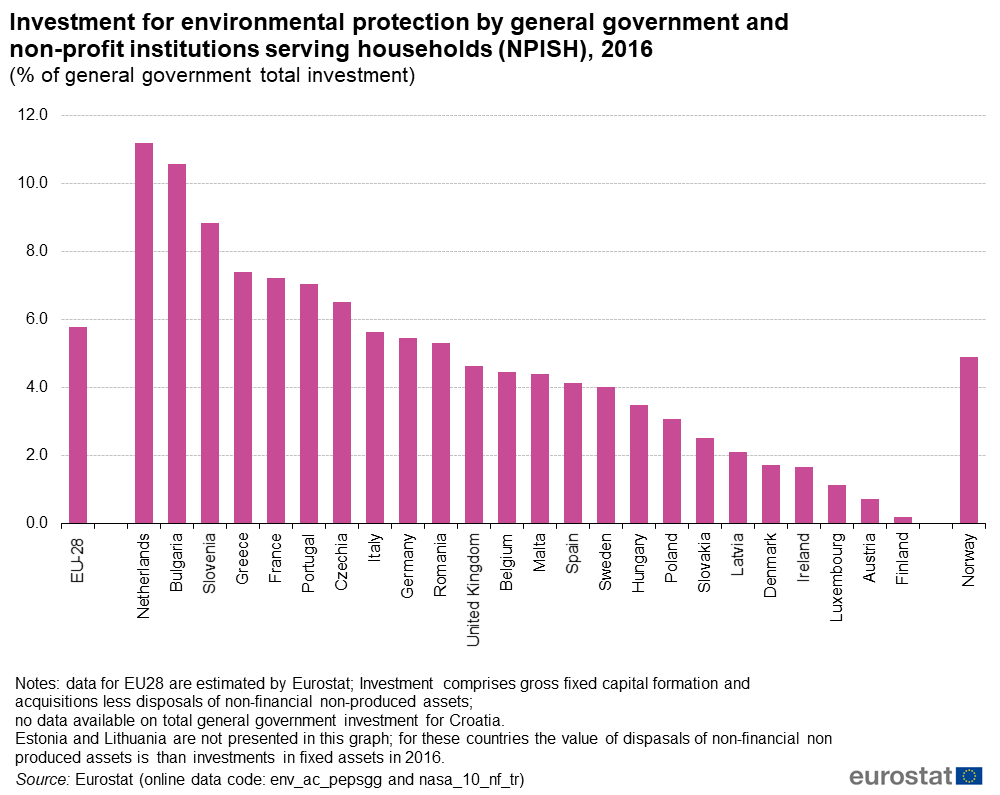 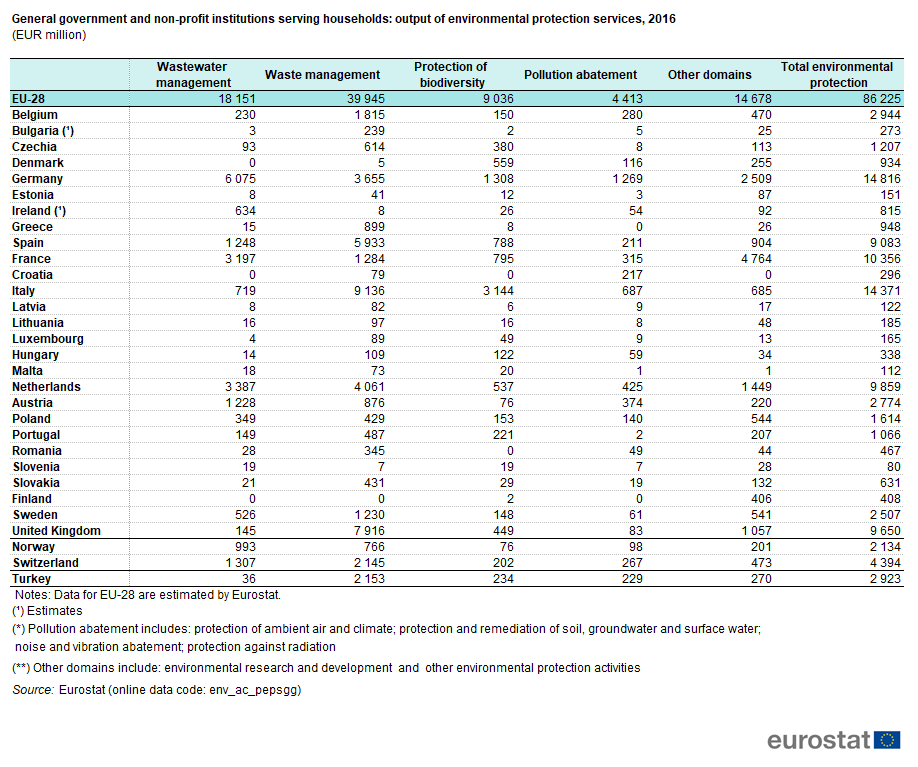 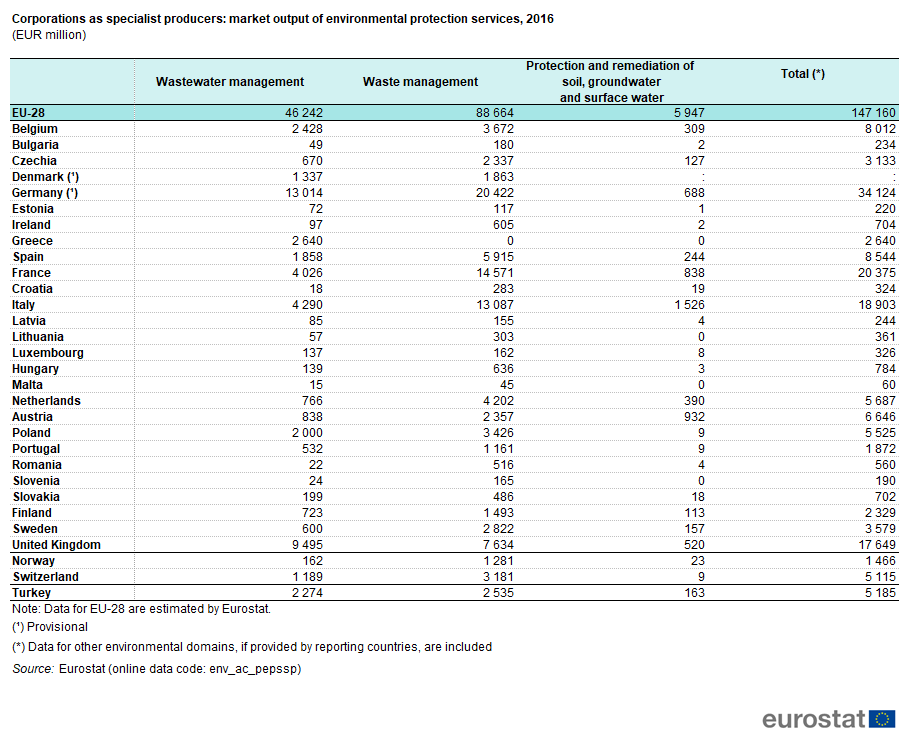 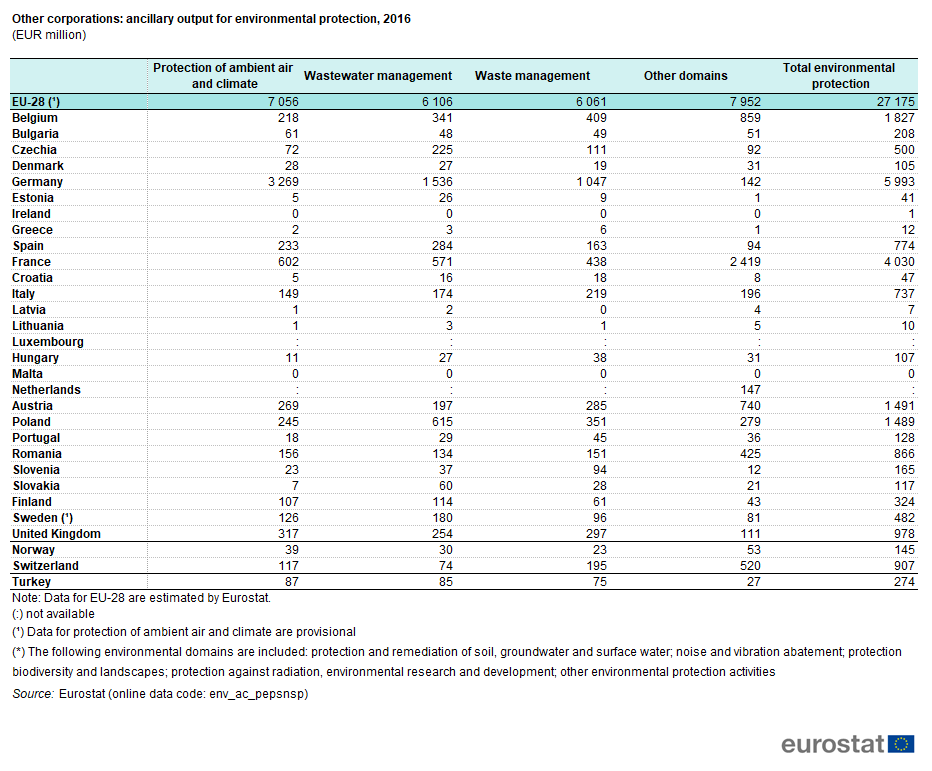 EPEA are a module of the European environmental economic accounts set out under Regulation (EU) No 691/2011 on European environmental economic accounts. EPEA follow the international standards of the System of Environmental-Economic Accounting 2012 Central Framework (SEEA CF 2012), and are broadly compatible with the international System of National Accounts (SNA 2008) and its European version, the European System of National and Regional Accounts (ESA 2010). The EU Member States have a legal obligation to report EPEA data from 2017-onwards. Data for EFTA countries, candidate countries and potential candidates are also collected and disseminated on Eurostat database.

This article is based on the results of the 2018 data collection and gives a comprehensive picture of EPEA since all Member States with reporting obligation (Cyprus was granted a derogation) submitted data for this second mandatory collection under EU Regulation on European environmental economic account (N° 691/2011). At the present stage of development, not all national totals comprehensively cover all types of activities and all environmental domains. In particular, for specialist producers, only the environmental activities of CEPA2, CEPA3 and CEPA4 are captured by the majority of responding countries.

The EU-28 figures presented in this article are estimated, aggregating the available data from the Member States. For all EPEA reporting items used for the calculation of NEEP, data gaps were filled by Eurostat's estimates. In addition, for the reference period not covered in the mandatory EPEA data reporting, early estimates were compiled at the EU level. Country EPEA data are compiled on the basis of the following sources: national accounts (supply and use tables), government finance statistics, structural business statistics, labour statistics and trade statistics. In many countries, results of statistical surveys, administrative sources and statistical estimations are also used for EPEA data compilation.

The corporation sector covers all units classified in national accounts to sectors S.11 and S.12. The most important providers of environmental services are specialist producers, i.e. the units of the corporation sector whose principal activity is waste collection, treatment and disposal, sewerage, remediation activities and other waste management services, which are classified under NACE Rev. 2 Divisions 37, 39 and under NACE Rev2 Groups 38.1 and 38.2. The secondary output of environmental protection services is also captured in EPEA and included in the output of specialist producers. The corporations other than specialist producers which undertake environmental protection expenditure to 'green' the process of their production of non-environmental goods and services are also covered in EPEA, but under a separate sector grouping (as 'other'/ancillary producers).

Environmental domains The scope of EPEA is defined according to the classification of environmental protection activities (CEPA). Data are collected and disseminated using the following breakdown:

CEPA is a recognised international standard included in the family of international economic and social classifications. It can be downloaded from the Ramon website.

The increased awareness of the need to combat environmental pollution and preserve natural resources has led to an increase in the supply and demand of environmental goods and services, in other words, products to prevent, measure, control, limit, minimise or correct environmental damage and resource depletion.