In 2019, the proportion of early leavers from education and training among persons aged 18-24 was the highest in Turkey among the candidate countries and potential candidates, with 28.9 % of young men and 28.6 % of young women.

Tweet
In 2019, Montenegro, Serbia and North Macedonia reported a higher proportion of persons aged 20-24 having attained at least an upper secondary level of education, compared to the EU.
Tweet

In all candidate countries and potential candidates for which data is available (no data for Kosovo), the ratio of men having graduated from a science or technology discipline was higher than the ratio of women in 2019.

Persons of 30-34 years old having completed tertiary or equivalent education, 2009 and 2019

This article is part of an online publication and provides information on a range of education statistics for the European Union (EU) enlargement countries, in other words the candidate countries and potential candidates. Montenegro, North Macedonia, Albania, Serbia and Turkey currently have candidate status, while Bosnia and Herzegovina as well as Kosovo* are potential candidates.

The article gives an overview of education developments, presenting an analysis of the different educational levels in terms of enrolment, educational attainment and tertiary education.

Number of pupils and students

While the absolute number of pupils and students is closely linked to the size and age structure of populations, there is a range of other factors that influence how long students remain in the education system, such as the length of compulsory schooling, opportunities in the labour market and the availability and cost of tertiary education. In recent years, policy interest has focused on encouraging young people to remain within educational systems so they may develop skills and gain qualifications that may help in the search for work in an increasingly knowledge-driven economy.

Early leavers from education and training

Figure 1 presents the share of early leavers (who finished at most a lower secondary education and were not involved in further education or training) from education and training among persons aged 18-24 years by gender in 2009 and 2019.

In Albania, Turkey and Montenegro, the proportion of early leavers was higher for young men than for young women, as in the EU, whereas in North Macedonia and Serbia the reverse situation was observed. 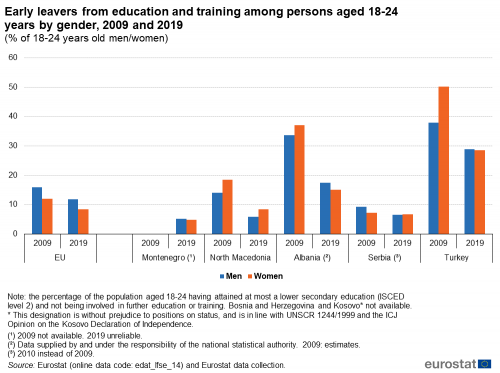 An alternative measure for analysing the outcomes of education systems is the youth education attainment level. This indicator is defined as the proportion of 20-24 year olds who have achieved at least an upper secondary level of education attainment (at least ISCED level 3). Data by gender are presented in Figure 2 as well as for the total population. 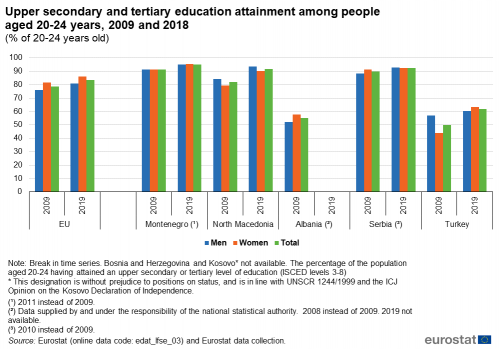 The proportion of persons aged 20-24 having attained at least an upper secondary level of education rose in all candidate countries and potential candidates for which data is available between 2009 and 2019, most notably in Turkey (+12.0 percentage points (pp) and North Macedonia (+10.0 pp). In the EU, the overall youth education attainment rose by 4.8 pp over the same period. It should be noted that there is a break in series.

Montenegro and Turkey reported higher proportions for young women than for young men in 2019. The gender gap was the highest in Turkey with 2.9 pp while it was 0.2 pp in Montenegro. By contrast, North Macedonia and Serbia recorded higher rates for young men than young women, with a difference of 3.5 pp and 0.3 pp, respectively. While the situation regarding the gender gap was quite similar in 2009 for Montenegro (2011 data) and North Macedonia, it was reversed for Serbia (2010 data) and Turkey. In 2009, the proportion of young men in Turkey was much higher than that of young women (13.1 pp difference), while it was the contrary in Serbia with 2.8 pp difference in favour of young women. Within the EU, the gender gap in youth education attainment levels stood at 5.2 pp in 2019, with a higher level of attainment for young women than for young men; similar to the situation in 2009 (5.8 pp).

Figure 3 shows the annual average change rate of students in tertiary education (ISCED levels 5-8) between 2014 and 2019. Among the candidate countries and potential candidates, there was an increase in the number of tertiary students in three cases: Turkey (+ 7.3 % per year), Kosovo (+6.6 %) and Serbia (+0.6 %). An average decrease of 4.4 % per year was recorded in Albania, with smaller annual average decreases in Montenegro (2.6 % between 2016 and 2019) and North Macedonia (0.1 % between 2014 and 2018). No data is available for Bosnia and Herzegovina. Some of these changes in student numbers may reflect demographic developments (for example, a growing number of young people in countries characterised by relatively high birth rates, or an overall decline in the number of young people in those countries with declining rates), rather than changes in the uptake of tertiary education among young people. In comparison, the number of tertiary education students in the EU increased on average by 0.4 % per year between 2014 and 2019. 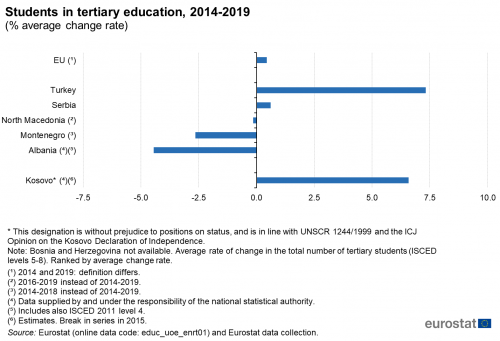 Figure 4 shows the proportion of 30-34 year olds who had completed a tertiary level of education. Montenegro reported the highest proportion in 2019 among the candidate countries and potential candidates for which data are available, with 36.8 %. There is no data for Bosnia and Herzegovina, and Kosovo. The other countries ranged from just above one third in North Macedonia and Serbia (35.7 % and 33.5 %, respectively) to just under one-third in Turkey and Albania (31.4 % and 31.3 %, respectively). All these countries reported lower proportions of 30-34 year olds having completed a tertiary level of education than in the EU, where it stood at two fifths (40.3 %) of this subpopulation in 2019. 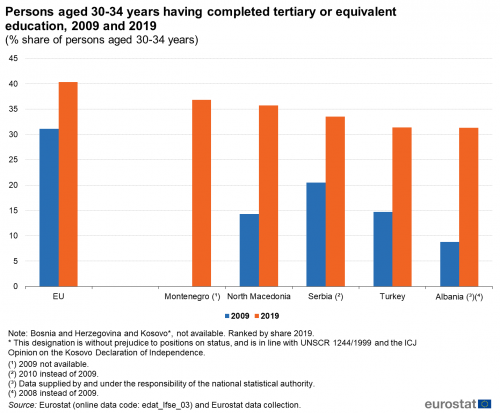 Figure 5 presents the repartition between men and women in tertiary education graduates in science and technology in 2014 and 2019. In all candidate countries and potential candidates for which data is available (no data for Kosovo), the ratio of men having graduated from a science or technology discipline was higher than the ratio of women in 2014 and 2019, the only exception being Albania in 2014 where the ratio for women was slightly higher than the ratio for men. 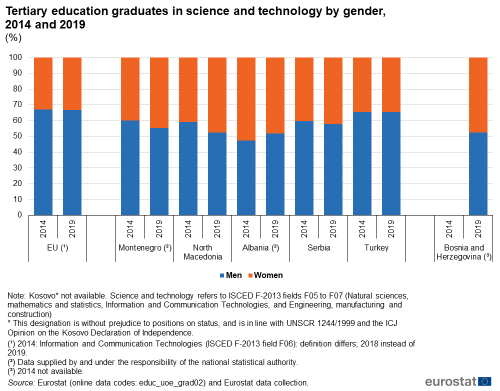 Data for the candidate countries and potential candidates are collected for a wide range of indicators each year through a questionnaire that is sent by Eurostat to candidate countries or potential candidates. A network of contacts has been established for updating these questionnaires, generally within the national statistical offices, but potentially including representatives of other data-producing organisations (for example, central banks or government ministries). The statistics shown in this article are made available free-of-charge on Eurostat’s website, together with a wide range of other socio-economic indicators collected as part of this initiative.

Education statistics cover a range of subjects, including: expenditure, personnel, participation and attainment. The standards for international statistics on education are set by three organisations:

The main source of data for the EU aggregate is a joint UNESCO/OECD/Eurostat (UOE) questionnaire on education systems and this is the basis for the core components of the Eurostat database on education statistics; Eurostat also collects data on regional enrolments and foreign language learning. EU data on educational attainment are mainly provided through household surveys, in particular the EU labour force survey (LFS).

Each EU Member State is responsible for its own education and training systems. As such, EU policy in this area is designed to support national action and address common challenges, by providing a forum for exchanging best practices.

The strategic framework for European cooperation in education and training was adopted by the Council in May 2009, with the following common objectives for 2020:

In 2021, a new ‘Strategic framework for European cooperation in education and training towards the European Education Area and beyond (2021-2030)’ was adopted by Council Resolution 2021/C 66/01. This sets the following strategic priorities:

Eurostat has the responsibility to ensure that statistical production of the candidate countries and potential candidates complies with the EU acquis in the field of statistics. To do so, Eurostat supports the national statistical offices and other producers of official statistics through a range of initiatives, such as pilot surveys, training courses, traineeships, study visits, workshops and seminars, and participation in meetings within the European Statistical System (ESS). The ultimate goal is the provision of harmonised, high-quality data that conforms to European and international standards.

Transition from education to work (edatt)