Employment rates of recent graduates (aged 20–34) not in education and training, by educational attainment level, EU, 2011–2021

This article presents statistics related to the employment rates of young adults aged 20–34 who recently graduated from either upper secondary or tertiary levels of education in the European Union (EU). ‘Recent graduates’ are defined here as persons who, firstly, have attained at least upper secondary education (ISCED 3) as the highest level of education, secondly, have not received any (formal or non-formal) education or training in the four weeks preceding the survey and thirdly, have successfully completed their highest educational attainment 1, 2 or 3 years before the survey. Data come from the EU labour force survey. The article is included in a series of statistical articles forming part of an online publication on education and training in the EU.

The article provides information regarding the transition from education to work and analyses access to the labour market among recent graduates. It is important to make sure that the transition from education to work is smooth to avoid the risk of becoming a person neither in employment nor in education or training (NEET). The risk of becoming a NEET decreases with the level of education but it is still important to bear it in mind.

Each EU Member State is responsible for its own education and training system, though EU policies in this field are designed to address common challenges, while providing a forum for the exchange of best practices and sharing evidence of policy initiatives. Vocational education and training (VET) is a key element for lifelong learning systems, and there is an EU-level objective that the share of employed recent graduates from VET should be at least 82 % by 2025 for those aged 20-34. In 2021, this share amounted to 76.4 % in the EU. 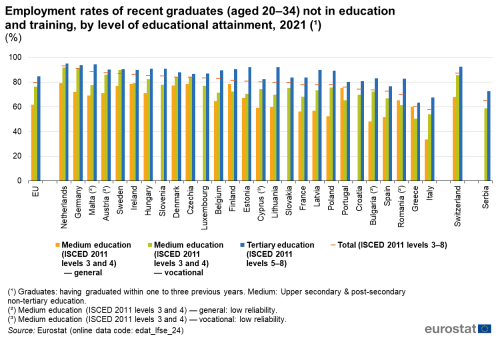 Figure 1: Employment rates of recent graduates (aged 20–34) not in education and training, by level of educational attainment, 2021
(%)
Source: Eurostat (edat_lfse_24) 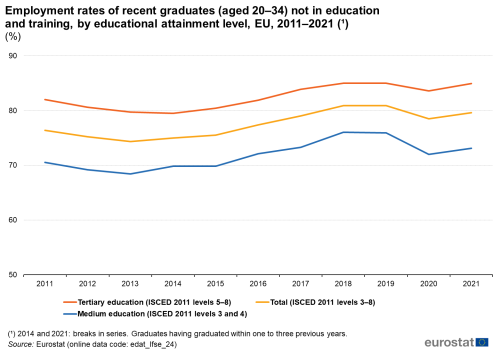 In 2021, the EU employment rate of recent male graduates stood at 81.1 %, while the corresponding rate recorded among recent female graduates was 78.2 %, see Figure 3. This constitutes a difference of 2.9 pp. between the sexes. Some of these differences may be explained by the nature of the field studied as there are differences in labour market demand. Women and men also tend to study different fields, for example, a higher proportion of science and technology students tend to be male.

Bearing in mind that the EU strives to increase the employment rates for recent graduates of medium vocational education to 82 % by 2025, this section focuses on this objective. Across the EU Member States there are wide variations both between countries but also within countries when the results are divided between women and men, see Figure 4.

Looking at the EU Member States in more detail, the numbers show that countries have differences between the sexes, both in magnitude and which sex has the higher employment rate. In 20 Member States men had a higher employment rate than women, this was also the case for Serbia. The largest difference in favour of male graduates from medium vocational education was found in Romania (22.5 pp.) followed by Czechia (19.9 pp.) and Slovenia (15.5 pp.). However, 5 Member States reported a higher employment rate for women. This was also the case for Switzerland. For this situation, the largest differences between the sexes were found in Portugal (17.5 pp.) followed by Malta (15.0 pp.) and Finland (7.9 pp.).

The results from 2021 show that in the EU men in general had a higher employment rate than women for recent graduates of medium vocational education, which is also true when looking back in time. The employment rates have been higher for men over time but the general pattern is similar for both women and men. The gender gap has varied in magnitude and was at its lowest in 2014 at 2.7 pp. Then in 2018 the largest difference was observed and amounted to 6.3 pp. in favour of men. With the onset of the COVID-19 pandemic in 2020, the rates fell sharply both for women and men. In 2021, the rates for both sexes increased slightly which could be seen as an indication of recovery. However, the rates were still well below the pre-pandemic level of 2019. Furthermore, to reach the goal for 2025 the level of employment rates needs to rise, especially for women.

The EU labour force survey (LFS) provides statistics on employment rates of recent graduates. The LFS is documented in this background article which provides information on the scope of the data, its legal basis, the methodology employed, as well as related concepts and definitions.

The employment rate is obtained by dividing the number of persons in employment (according to the ILO definition) of a particular age group by the total population of the same age group. The indicator for recent graduates is calculated for the age group 20–34 and concerns those who had successfully completed their highest level of education one to three years beforehand. The term ‘graduate’ refers to any person who has left education and training with at least an upper-secondary or post-secondary, non-tertiary qualification or with a tertiary qualification (ISCED 2011 levels 3–8). The denominator for the ratio is based solely on those persons who were no longer in (formal or non-formal) education or training and hence excludes both:

Common definitions for education systems have been agreed between the UNESCO Institute for Statistics (UIS), the OECD and Eurostat. UNESCO developed the International standard classification of education (ISCED) to facilitate comparisons across countries on the basis of uniform and internationally agreed definitions. In 2011, a revision to the ISCED was formally adopted, referred to as ISCED 2011. Prior to this, ISCED 1997 was used as the common standard for classifying education systems. Note that Eurostat statistics on employment rates of recent graduates have a break in series in 2014 when the first information collected under the ISCED 2011 classification became available; prior to this date these statistics were collected using ISCED 1997. For more information, see the article on the ISCED classification.

Note on symbols used in tables

The colon (‘:’) is used to show where data are not available.

Principle 1 of the European pillar of social rights states that “everyone has the right to quality and inclusive education, training and lifelong learning in order to maintain and acquire skills that enable them to participate fully in society and manage successfully transitions in the labour market”. The European Skills Agenda is a five-year plan to support skills development. Equipping people with the right skills helps them to adjust to changes that come along with technological developments in the way we work, learn, take part in society and lead our everyday lives. The right skills help individuals to adjust to these changes and ensure their well-being while contributing to society, productivity and economic growth. The ‘Youth guarantee’ calls on EU Member States to ensure that all young people under the age of 25 receive a good quality offer of employment, continued education, an apprenticeship or a traineeship within four months of leaving formal education or becoming unemployed. Its main aim is to help tackle youth unemployment and to smooth the transition from education to work. The reinforced youth guarantee extended the target population to all young people under the age of 30.

The overall state of an economy is an important determinant for both the availability and the quality of job opportunities. With a downturn in economic fortunes resulting from the global financial and economic crisis in the late 2000s or the recent COVID-19 pandemic, graduates in the EU faced with a range of difficulties when trying to enter labour markets, with persistently high unemployment rates and many graduates accepting work for which they were over-qualified or unqualified. Such a mismatch may result from differences between occupations and qualifications (a vertical mismatch), or from differences between occupations and fields of study (a horizontal mismatch); the former is generally more common within the EU (see also Skills mismatch experimental indicators).