Emergency oil stocks in the EU at lower levels in June and July 2022 after relieving market tensions following the Russian invasion of Ukraine.

Replenishment of emergency oil stocks in the EU set to reach the higher required levels for enhanced security of supply. 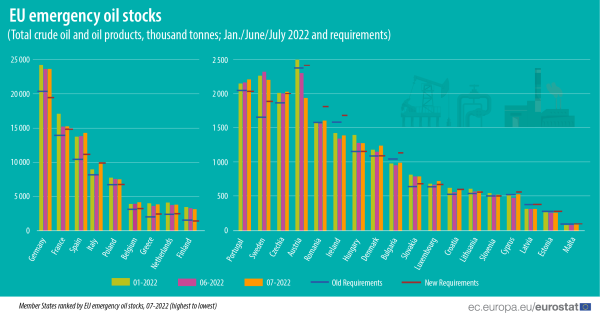 This article presents data on emergency and commercial oil stocks in the European Union (EU). Crude oil and petroleum products play a very important role in the economy of the European Union and, given the oil import dependency of the EU, holding emergency oil stocks is very important for the energy security of the EU. Commercial stocks can also be fundamental in times of need and therefore are included in the assessment of the overall stock holding situation. Given the current geopolitical instability, holding stocks becomes even more crucial.

Crude oil and petroleum products play a very important role in the economy of the European Union, particularly in the transport sector and the petrochemical industry. Given their important role and the oil import dependency of the EU, holding emergency oil stocks is very important for the energy security of the Union. To guarantee these stocks, the relevant EU law, Council Directive 2009/119/EC imposes an obligation on Member States to maintain minimum emergency stocks of crude oil and petroleum products. Member States are required, at all times, to maintain oil stocks equivalent to at least 90 days of average daily net imports or 61 days of average daily inland consumption, whichever of the two quantities is greater. In the geopolitical situation following the Russian aggression on Ukraine, these requirements have played a major role in stabilising the market as they did previously during other lesser emergencies.

June 2022 levels reflect two emergency oil stocks releases coordinated by the International Energy Agency (IEA) in March and April 2022. The total amount released of 182.7 million barrels was the largest in the IEA’s history (see here). Eighteen EU Member States participated in the joint action and released stocks in the course of the following months. The current levels are mostly composed of crude oil (45.5 million tonnes in the EU), followed by gas/diesel oil (35.9 million tonnes) and gasoline (9.8 million tonnes). The composition of the emergency stocks by fuels is selected by each country and must adhere to its specific needs; therefore, it varies as seen in the table below. 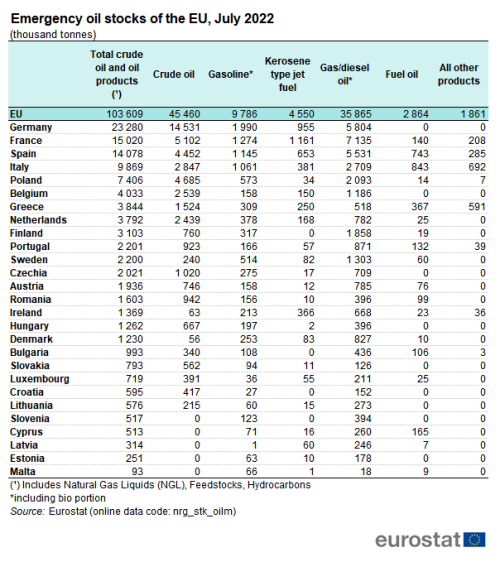 Some of the EU Member States that participated in the coordinated effort of stabilising the oil market, or used stocks to face internal difficulties assuring supply to final customers, fell below their required levels which were in force between June 2021 and June 2022, and were based on the production and imports data of 2020. Additionally, new requirements, based on 2021 data, came into force starting from July 2022. In most Member States, the yearly needs in 2021 were higher than in 2020, a year during which needs were particularly low due to the Covid crisis, further amplifying the gap between levels held and levels required starting from July 2022. Member States are obliged to replenish the stocks to the minimum required levels and cooperate with the Commission to determine a reasonable time frame, taking into account the situation in the domestic and international oil and petroleum products markets.

The reference method for requirements can change in July of each year, when the obligations are recalculated based on the production and imports/exports data of the previous year.

Table 2 presents the emergency oil stocks in days equivalent, according to the methods applied for the obligations. In January 2022, before the coordinated releases mentioned above, 24 Member States kept oil stocks based on net imports and four were below the 90 days requirement (marked in red below). Two Member States kept stocks based on inland consumption and both were above the required 61 days. 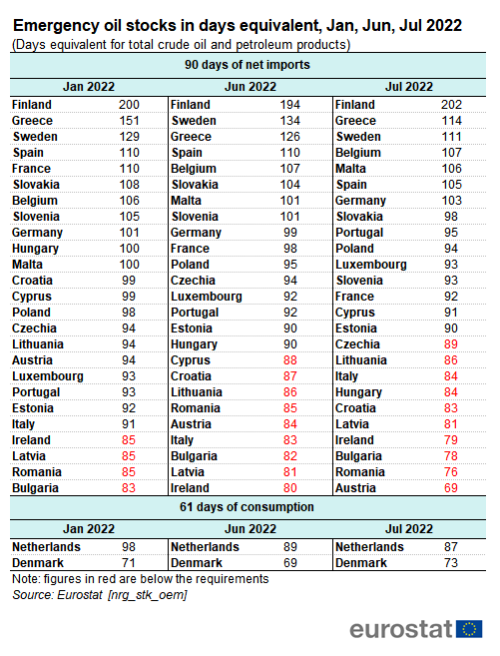 According to the Directive, countries must also report most of their commercial stocks. Specifically, they must report those stocks held by economic operators in the national territory for their own operational and commercial needs, which therefore can be considered available, in addition to the emergency stocks, in case of need.

However, while emergency stocks, outside critical events, are normally quite stable as they reflect obligations that are calculated on an annual basis, commercial stocks in the territory may fluctuate according to market trends. In August 2020, due to the fall in demand for several fuels during the Covid crisis, commercial oil stocks levels hit a record high (63.2 million tonnes), reaching in some countries the limits of maximum storage capacity. Later, due also to the restart of the economic activities, commercial stocks levels began to decrease, reaching a low point in December 2021 (44.8 million tonnes), fluctuating afterwards before reaching 51.4 million tonnes in July 2022. In this month, the commercial stocks accounted for 33.1 % of the total stocks reported under the Directive.

These values are intrinsically volatile, as they are influenced by many factors such as spot prices, geopolitical situations, OPEC+ decisions, policy announcements, and refineries’ choices. 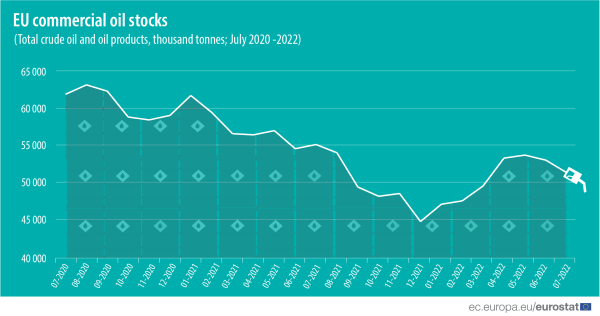 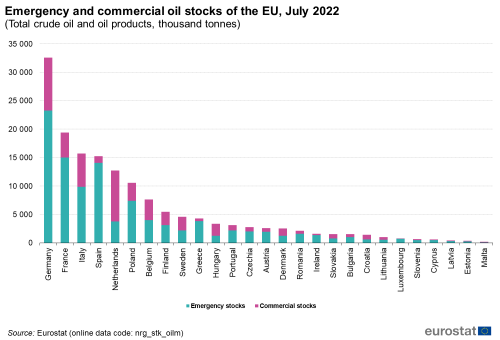 Data on energy are submitted on the basis of internationally agreed methodology. Data are available for all EU countries and the methodology is harmonised for all reporting countries. Consequently, data comparability across countries is very high. All energy data are available in the online database.
NOTE: Some data are provisional: Please refer to the “p” flags in the database for further details.
NOTE: Quantities of emergency stocks held in accordance with the Directive listed as “Stocks – EU Emergency” in table NRG_STK_OILM refers to actual quantities in thousand tonnes. Such quantities are reassessed using weights (multipliers) to determine their value in “days equivalent” which are reported in table NRG_STK_OEM. Yearly imports and consumption values declared by reporting countries are also reassessed using weights (multipliers) to calculate requirement levels defined as “minimum stock level for compliance” in table NRG_STK_OEM. This can create some apparent discrepancies when comparing values in NRG_STK_OILM NRG_STK_OEM Council Directive 2009/119/EC details the provisions regarding these weights.

Crude oil and petroleum products play a very important role in the economy and import dependency is a very crucial element of economic stability, political autonomy and energy security. Holding emergency oil stocks is therefore very important in time of crises. The assessment of the overall stock holding situation is consequently a fundamental task. Requirements and obligations for the EU Member States are outlined in the Council Directive 2009/119/EC of 14 September 2009 imposing an obligation on Member States to maintain minimum stocks of crude oil and/or petroleum products and in the Commission Implementing Directive (EU) 2018/1581 of 19 October 2018 amending Council Directive 2009/119/EC as regards the methods for calculating stockholding obligations