This article is part of a set of background articles explaining in some detail how statistics producers, such as national or international statistical institutes, may build a coherent system of national accounts (SNA), especially in developing countries. The articles are based on the official Eurostat handbook Essential SNA - Building the basics and they focus particularly on the early stages of the implementation.

Statistical indicators estimating is based on information collected from two main sources: statistical sources (censuses and surveys) and administrative registers. The following section describes the characteristics and the collection of data from censuses and surveys. 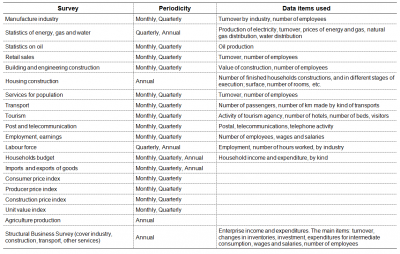 The other main components of statistical infrastructure, business register and statistical classifications and administrative data sources have their own articles.

Data obtained through the census is used for estimating some specific national accounts indicators and as a basis for further developments. The three principal types of censuses are:

Population census: the observation unit is the household and the person. Generally it is carried out together with the housing census. The population census provides an inventory of the nation’s human resources in great geographical, demographic and socio-economic detail.

In respect of the housing census, the units of enumeration are buildings, living quarters, households and occupants. The main topics included in the housing census refer to the type of ownership of the housing, type of building, construction materials, access to water and electricity, location, number of rooms, etc.

The disadvantages of a census are:

Surveys elicit responses about specific phenomena from a few representative units scientifically selected from a population. Population data is obtained by expanding the sample data and by extrapolating the sample size to the population size.

Statistical surveys may be classified into the following categories:

The main sources of data for agricultural activity include censuses of agriculture and livestock, crop estimation surveys, studies on farm management and cost of cultivation studies, agricultural household surveys and various returns collected by administrative agencies concerned with prices and production relating to agriculture.

Structural business statistics (SBS) describes the structure, coordination and performance of economic activities, down to the most detailed activity level (several hundred sectors).

The SBS collects detailed information about an enterprise’s economic activity and represents the most important data source for the compilation of national accounts indicators, using a breakdown by industry. At the same time, the SBS analyses business structure and evolution, production factors used, as well as other elements.

The SBS describes the economy by observing units engaged in an economic activity, generally the enterprise. An enterprise carries out one or more activities at one or more locations and may comprise one or more legal units. Enterprises active in more than one economic area are classified under the ISIC Rev. 4 heading corresponding to their principal activity, normally the one that generates the largest amount of value added.

The SBS covers the business economy, which includes industry, construction and services. In many countries, financial services are kept separate because of their specific nature and the limited availability of most types of standard business statistics in this area, but there are also countries that conduct this survey for financial institutions. SBS does not cover agriculture, forestry and fishing, nor public administration and (largely) non-market services such as education and health.

A subset of the SBS variables is available with a breakdown according to size of enterprise (for instance small and medium-sized enterprises) and with a regional breakdown (as in the regional structural business statistics).

Countries in Phase zero or even in the first stage of SNA implementation may not have developed construction statistics and direct information on the activity of this sector may be difficult to gather. Should this be the case, national accountants should investigate the possibility of using other available information and developing their own methods of estimation, following the phases presented in the article Building the System of National Accounts - strategy.

In the absence of direct statistical information, one method that can be developed uses production estimates as the sum of its components: intermediate consumption and gross value added (GVA). Data on domestic production, import and export of raw materials used in the construction process is the basis for estimating intermediate consumption; information concerning the number of employees, the average wage of the sector and assumptions about the gross profit of the construction enterprises can be used to estimate GVA. The number of employees in the construction sector may also be provided by the Labour force survey (LFS) or in its absence, administrative information can be used.

The consumer price index measures change over time in the general level of prices of goods and services that a reference population acquires, uses or pays for consumption. A consumer price index is estimated as a series of summary measures of the period-to-period proportional change in the prices of a fixed set of consumer goods and services of constant quantity and characteristics, acquired, used or paid for by the reference population.

Each summary measure is constructed as a weighted average of a large number of elementary aggregate indices. Each of the elementary aggregate indices is estimated using a sample of prices for a defined set of goods and services obtained in or by residents of a specific region from a given set of outlets or other sources of consumption goods and services.

CPI is used in national accounts estimates to deflate expenditures at current prices or money incomes to derive measures of real consumption and real income. However, it should be noted that in practice price indices and expenditure series are often compiled independently of each other by different departments of a statistical agency or even by different agencies, so the coverage of a CPI may differ from that of total household consumption expenditure in the national account. Obviously this could lead to inconsistencies.

The price index used to deflate expenditures in national accounts should cover additional goods and services, not included in the CPI. However, this may not be easy to achieve in practice because the relevant price data may not be easily available, especially if the price collection procedures are geared to the CPI. Moreover, even if all the basic price data are available, the price index needed for deflation purposes is likely to be calculated using a different type or formula from the CPI itself.

In general terms, PPI can be described as an index designed to measure either the average change in price of goods and services as they leave the place of production or as they enter the production process. Thus, production price indices fall into two clear categories: input prices (i.e. purchase prices) and output prices (i.e. basic prices).

Although PPI is an important economic indicator, the main use of the PPI is as an output or sales data deflator when compiling production volumes and deflating capital expenditure and inventory data in national accounts. As a result, the concepts underlying the PPI are often conditioned by those underlying the national accounts. This can lead to various conflicts: for example, for contract escalation[1], users would like weightings to be fixed for a long period. However, for deflating national accounts, current-weighted indices and fine aggregations are required, since in theory deflation is best done at the lowest level of disaggregation.

Unit value index is a composite cost index designed to express, in a single index, price (value) changes involving a range of internationally traded commodities. UVI provides an overall measure of price changes in imported /exported goods, although they not only reflect changes in price but also changes in quantity.

Unit value is calculated as the ratio of commodity value ($) to net commodity mass (kg), derived from administrative customs documents: UVI = $/Kg. Export price index (XPI) and import price index (MPI) are based on unit value indices and price survey indices. These indices are used in national accounts as export and import value deflators to obtain these figures in quantity terms.

In many countries, where no XPI and MPI exist, UVI is used as a proxy for pure price or survey-based price index. Unit value indices were suggested by the United Nations[2] for countries with a tight or medium budget, while well-endowed countries were advised to base their external trade price indices on data from establishment surveys. It should be noted that unit value indices may lead to error mainly due to changes in the mix of heterogeneous information collected in customs documents, but sometimes also due to the often poor quality of data on quantities.

The construction price index provides measures of price change in either inputs to, or outputs of construction activity. It is used to track changes/trends in the cost (or price) of construction. However, it does not provide information on the current market value of construction work, earning capacity or rental values.

The best known types of construction price index are the following:

The construction price index is also used to deflate national accounts construction output estimates, and gross fixed capital formation in residential construction to assess real changes in the output of these activities.

Household statistics describe family and household composition and offer a cross-sectional picture of families and their patterns, yielding comprehensive data not only on their economic activities but also on demographic and social aspects, as well as on overall living conditions. Household statistics are gathered from household surveys, among which the Labour force surveys (LFS) and the Household budget survey (HBS) are the most common and useful ones.

The Labour Force Survey (LFS) is a survey that provides data on working-age persons living in private households. Its main emphasis is on employment, unemployment and inactivity.

The LFS divides the population of working age (15 years and above)[3] into three mutually exclusive and exhaustive groups - persons in employment, unemployed persons and inactive persons - and it provides descriptive and explanatory data on each of these categories. The information is detailed by industry, using the ISIC classification.

The LFS is usually conducted on a quarterly basis, but there are countries where this survey is carried out once a year.

The main use of LFS in national accounts is for estimating the non-observed economy (NOE), although it is also used to refine the measurement of wages and employment by sector.

The basic unit in the HBS is the household. It is important to identify the reference person (often the head of the household) whose personal characteristics (the socio-economic group, occupation and employment status, income, sex, age, etc.) are used in the classification and analysis of information on the whole household.

One important phase of the SNA implementation strategy is the identification and analysis of data sources needed for compiling national accounts.

For more information, see the section on The SNA implementation strategy in the article Building the System of National Accounts - strategy.

In this context, the statistical office, in charge of building the bases for meeting the national accounts minimal requirements, must implement and develop some essential statistical surveys. From the perspective of SNA implementation, the most important data requirements are those associated with compiling gross domestic product (GDP) by production and expenditure approaches, at current and constant prices. Figure 7 presents an example of how the basic data requirements may be obtained through surveys that need to be carried out in the statistical system.

Following the main SNA implementation guidelines, the process of compiling national accounts using statistical data sources should be established by addressing some specific issues, such as: