This article is part of a set of background articles explaining in some detail how statistics producers, such as national or international statistical institutes, may build a coherent system of national accounts (SNA), especially in developing countries. The articles are based on the official Eurostat handbook Essential SNA - Building the basics and they focus particularly on the early stages of the implementation.

In many least developed and developing countries, the observed and non-observed informal sector involves an important labour force, which contributes to economic production. This article defines and presents the criteria used to identify the informal sector, the measurement methods to be adapted to country specificities and the most relevant statistical surveys used for estimating this sector of the economy. The economic impact of the informal sector is hard to measure because of the difficulty in defining and analysing the phenomenon owing to the limited available information. This is often due to the financial restrictions faced by statistical offices and the characteristics of the informal sector in a specific country.

Place of the informal sector in the economy

The informal sector manifests itself in different ways in different countries, different regions within the same country, and even different parts of the same city. It encompasses different kinds of activities, different types of enterprise, and different reasons for participating. Informal activities range from street vending, shoe shining, food processing and other minor activities requiring little or no capital and skills and with marginal output, to those involving a certain amount of investment in skills and capital and with higher productivity, such as manufacturing, tailoring, car repair and mechanised transport. While some informal sector activities resemble traditional activities in handicrafts, food processing or personal services, others such as car repair, recycling of waste materials or transport, are new and arise from modernisation. 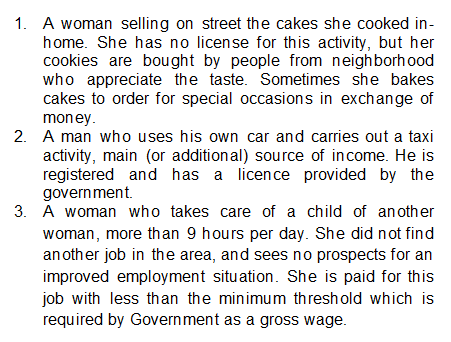 Reasons for participating in the informal sector range from pure survival strategies undertaken by individuals facing a lack of (adequate) jobs, unemployment insurance or other forms of income maintenance, to the desire for independence and flexible work arrangements and, in some cases, the prospect of quite profitable income-earning opportunities, or the continuation of traditional activities.

The above definition is only an ‘umbrella definition’ of the informal sector, as its scope and coverage depends on national circumstances. The conditions under which these activities come into existence and the constraints under which they are undertaken confer certain characteristics on them, leading to specific criteria for determining what is meant by informal.

The criteria used to identify the informal sector in the SNA framework may be classified as follows: 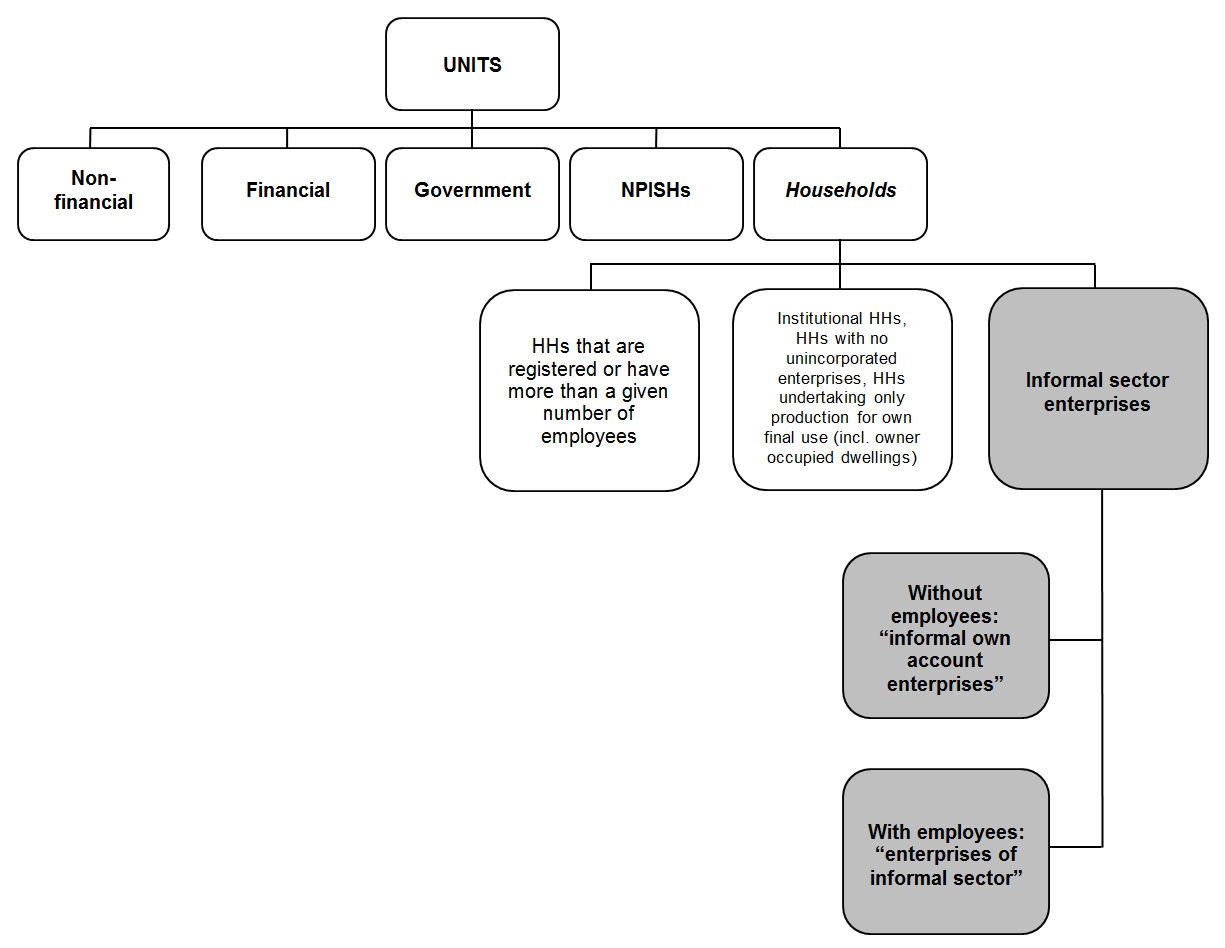 Figure 2 shows the units of the informal sector in the economy.

Production units are household unincorporated enterprises. Depending on types of employment involved, they are further sub-divided: 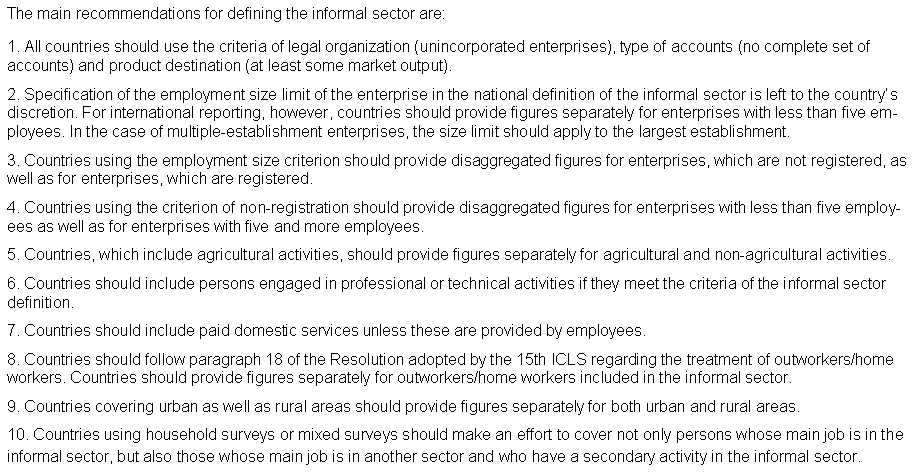 In the extended conceptual framework, the informal economy is considered as comprising informal employment (without secure contracts, worker benefits, or social protection) both inside and outside informal enterprises:

The informal economy consists of a wide range of informal enterprises and informal jobs. Despite its heterogeneity, there are meaningful ways of classifying its component segments:

Informal enterprises consist of micro-enterprises (with an employer plus some employees), family businesses (with an owner operator and, sometimes, unpaid family workers) and own-account operations (with an individual owner operator). Informal employment relations consist of informal enterprise employees as well as domestic workers without a regular contract, casual day labourers without a fixed employer, temporary workers obtaining work through an agency, part-time workers for a fixed employer, industrial outworkers for formal or informal firms (and their intermediaries) and unregistered or undeclared workers. Figure 4 presents the framework of informal employment in the economy.

Figure 4: The conceptual framework for the informal economy - (a) As defined by the Fifteenth International Conference of Labour Statisticians in 1993 - (b) Households producing goods for their own final use and households employing domestic workers - Source: ILO, Decent Work and the Informal Economy Report VI, International Labour Conference, 90th Session, Geneva, 2002

Figure 4 should be read as following:

How to measure the informal sector

Several approaches may be used to estimate activity in the informal sector. The choice or combination will depend on the objectives which range from very simple such as only having information about the evolution of number and characteristics of persons involved in the informal sector, or more complex such as obtaining detailed information about the characteristics of the enterprises involved, the main activities undertaken, number of employees, income generation, capital equipment, etc. The choice of measurement method depends upon data requirements, statistical systems organisation, financial and human resources capability and user needs, especially policy makers involved in economic decision taking. 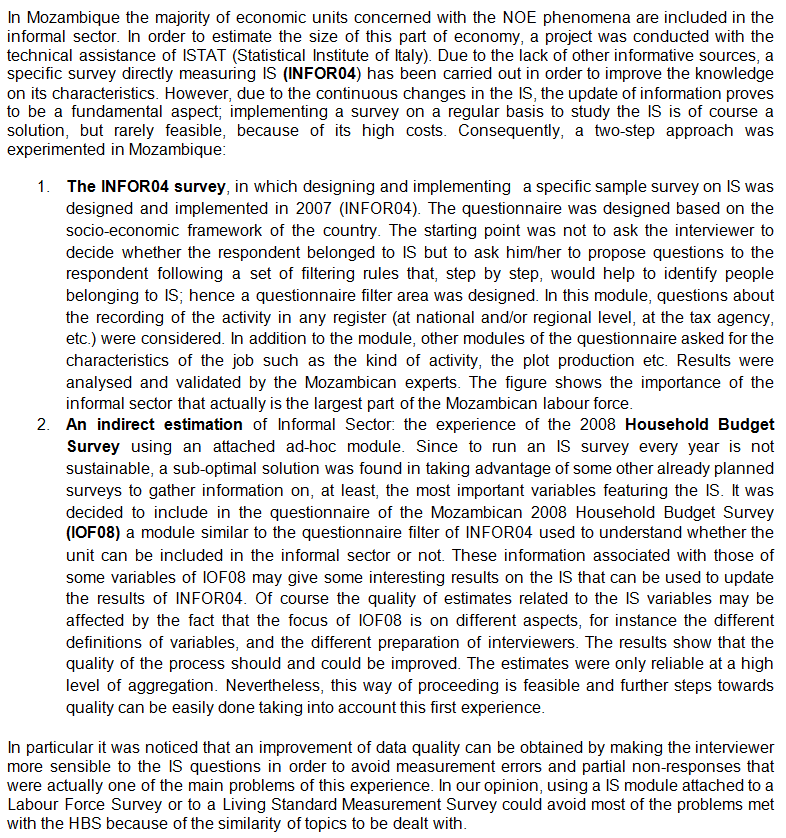 The main methods used to obtain estimates of the magnitude of the informal sector can be separated into three classes:

A major challenge for developing countries and economies in transition is the statistical measurement of the informal sector with respect to size, characteristics and contribution to GDP.

There are not many countries that conduct regular surveys to measure employment in this sector and even fewer measure its contribution to GDP.

One of the main reasons for the lack of estimates is the limited resources of national statistical systems which do not allow for integrating regular data collection on the informal sector.

Depending on their objectives, countries use a variety of survey tools for measuring the informal sector, including independent ad hoc surveys, mixed household-enterprise surveys, labour force or other household surveys, enterprise/establishment surveys and economic censuses. For example, some statistical offices adopt a fragmented approach using different methods, questionnaires and reference periods in conducting ad hoc industry surveys of informal sector enterprises which reflect, for instance, the relative importance attached to a particular industry at a given point in time. Other countries limit their surveys to major urban areas only.

Bearing in mind that resources are often limited in countries with a large informal sector, national statistical offices should prioritise their strategic objectives for estimating the informal sector.

The first step, as for the general strategy for the SNA implementation offered in the article Building the System of National Accounts - strategy, is that the main users of the statistics are consulted. This consultation ensures that the data to be produced is relevant to the needs and priorities identified at national and international levels and builds support for developing statistical programmes.

The second step of the strategy refers to establishing the approach for collecting data and defining the main indicators to be estimated. The various survey approaches used are:

The different approaches presented highlight the diversity in scope and coverage of the various informal sector surveys, which complicates their comparability across countries and over time (see Figure 6). At the same time, flexibility in criteria adaptation is an important characteristic for measuring the informal sector given its unique economic structure and policy interests in each country. Bearing in mind the need for flexibility and international comparability of the dynamics and structure of the informal sector, the best approach is the Fully Integrated Rational Survey Technique (FIRST) methodology. This approach is based on a modified mixed household-enterprise survey integrated into a comprehensive data collection programme on economic statistics. However, its application requires financial and human resources and is difficult to conduct on a regular basis.

Addressing these critical issues in data collection on the informal sector, the Interregional Cooperation on the Measurement of Informal Sector and Informal Employment (ICMISIE)[2] project proposed the ‘1-2’ survey, which is a specific kind of mixed household-enterprise survey.

The ‘1-2’ survey can be successfully used by developing countries with limited budgets for data collection but with a large informal sector impacting on the development of their economies. They can conduct the survey once a year; while the HUEM survey may not be conducted annually, LFS surveys will gather information on informal employment that may be used for identifying informal enterprises. In this way, the informal sector’s contribution to GDP can be fully integrated into the national accounts data compilation framework. 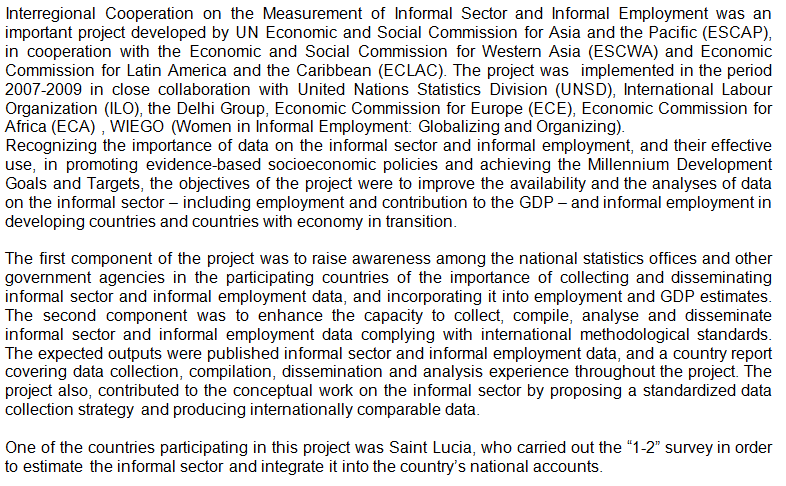 The informal sector represents an important part of developing economies, and governments and international organisations are focussing their attention towards understanding what proportion it represents, why it exists and how it operates so as to take adequate measures to reduce it. Measuring it is an important challenge for developing countries.

The SNA implementation strategy will take the informal sector into account when the compilation of national accounts is well established by using the main phases presented in Building the System of National Accounts - strategy. Information about size and characteristics of the informal sector must be obtained in order to help decision-makers take pertinent measures aimed at improving a country’s welfare and reinforcing the important role of national accounts within the statistical system.

To ensure the exhaustiveness of estimates represents one of the goals of national accountants. In order to build an apprpriate strategy for NOE and informal sector estimation, improvement is useful to clarify the following issues: