Archive:Young people not in employment, education or training - NEET

This Statistics Explained article is outdated and has been archived - for recent articles see here. 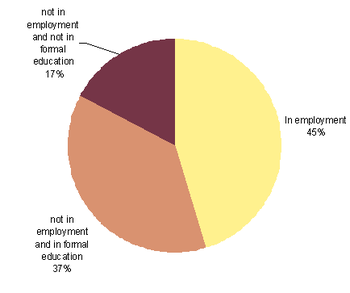 This article focuses on young jobless people (persons who are not employed, either looking for a job or not) and their education status in the European Union (EU) and some of the EFTA and candidate countries. Section 1.1 presents a distribution of the population with regards to employment status (employed or not) and participation in formal education (or not). Sections 1.2 and 1.3 explain this distribution with indicators on persons not employed and not in education and training (NEET) and on early leavers from education and training.

The situation of people on the labour market  is usually described through indicators related to the active population, such as the employment or unemployment rate. These indicators provide information about the situation of people who already have a job or are actively looking for one. When focussing the analysis on the situation of young people, the education dimension needs to be considered as participation in education and training activities play a significant role among younger age groups such as 18-24. This is of particular importance for young people aged 18-24 who are not employed.

People who are 'neither in employment nor in education and training' (NEET) are often looked at in labour market policies to monitor youth who are likely to be socially excluded. From an educational perspective, an interesting breakdown of NEETs is the percentage of persons aged 18-24 who have left formal education with at most lower-secondary education level and who are no longer engaged in any kind of further education or training. The latter group is part of the‘early leavers from education and training’. 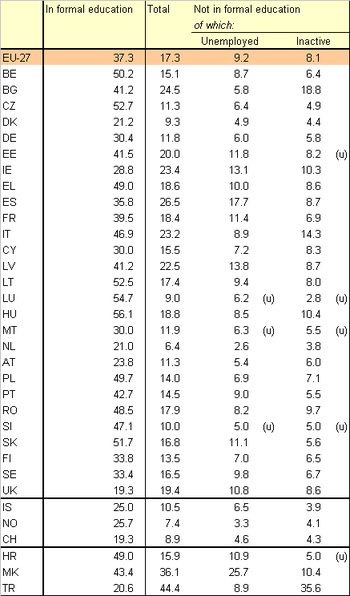 Table 1: Population aged 18-24 not in employment by participation in formal education and behaviour regarding work, 2009 (%), Source: Eurostat, EU-LFS (edat_lfse_19) 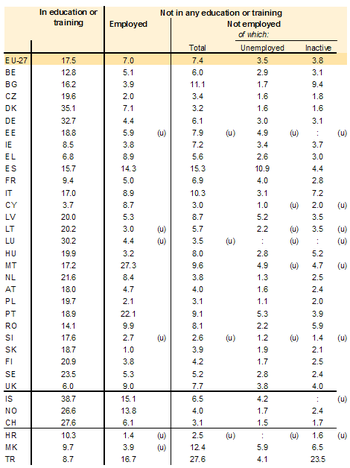 In the European Union, almost half (45%) of the population aged 18-24 was in employment in 2009 (even if only for one hour per week) (see Figure 1). Those in employment exclusively represented circa 29% of the age group 18-24, those combining both employment with education accounted for 16%. The other half (55%) consists of two sub-groups: persons not in employment but attending formal education (37%) and persons neither in formal education nor in employment (17%). The latter category is of specific importance for policy-makers since it embodies persons likely to be socially excluded.

Population not in employment and participation in formal education by country

The proportion of people aged 18-­24, not in employment but attending formal education (37% at EU level), varies across countries due to many factors. They are mainly linked to the educational systems, including length of compulsory schooling, types of educational programmes available to students and access to tertiary education. In 2009, the percentage of young persons not in employment but enrolled in formal education ranged from 19 % in the United Kingdom to 56 % in Hungary (see Table 1).

Beside those still in education, other young people are neither in employment nor in formal education. This means that they have left formal education and are either unemployed, or inactive, i.e. being passive job seekers, discouraged to enter the labour market or deliberately avoiding it. In 2009 in the EU, nearly 17% of the population aged 18-24 was in this situation. This share varied from 6% in the Netherlands to 26% in Spain.

The composition of the population neither in employment nor in formal education differed across EU Member States: more than 2 out 3 were 'inactive' in Bulgaria, whereas in Luxembourg and Spain the same proportion was 'unemployed'.

Early leavers from education and training

From the educational perspective, policy-makers are interested in all young people who left the education system with at most a low education attainment level: at EU level (see Table 3), this population represented 14.4 % (7  pp. employed; 7.4  pp. not employed) of the population aged 18-24, and ranged from 5 % in Slovakia to 31 % in Portugal and 37 % in Malta. Those who are not in employment can be either unemployed (3.5  pp. at EU level) or inactive (3.8  pp.at EU level).

Table 4 below summarizes the different types of situations young people can face with regard to employment and educational attainment.

The source of the data presented here is the Labour Force survey (LFS), a large sample survey among private households which provides detailed annual and quarterly data on employment, unemployment and inactivity.
The data can be broken down along many dimensions including age, sex, educational attainment, and distinctions between permanent/temporary and full-time/part-time employment. It covers people aged 15 and over in the EU, European Free Trade Association (EFTA) – except Liechtenstein – and candidate countries.

The young population is recognised as one of the most vulnerable groups in society. This is particularly the case in today's situation, as the financial and economic crises have had a strong impact on young people. The EU Youth Strategy states that: "The social exclusion and poverty of young people and the transmission of such problems between generations should be prevented and mutual solidarity between society and young people strengthened. Equal opportunities for all should be promoted and all forms of discriminations combated."

In the flagship initiative "Youth on the Move", the Commission set out proposals to reach the EU 2020 targets in the domains of education and employment, at national and European level.

Young people aged 15-24 [1]who are neither in employment, education nor training (NEETs) have a much higher risk of not finding work, of experiencing poverty and/or being socially excluded in the future than other groups in society. It is therefore a high priority for the EU to reduce the number of NEETs. In April 2010, the Employment Committee and its Indicators Group agreed on a definition and methodology for a NEET indicator to be used in the context of the Europe 2020 strategy.

Young people by educational and employment status (incl. neither in employment nor in education or training - 'NEET') (edatt0)