Tweet
COVID-19 restrictions led to a substantial fall in the number of passengers transported by air in 2020.
Tweet
In 2020, 277 million people in the EU travelled by air, a decrease of 73.3 % compared with 2019.
Tweet
In 2020, Paris Charles De Gaulle recorded the highest number of air passengers (22 million), followed by Amsterdam Schiphol (21 million).
Tweet
In 2020, Frankfurt Main was the main European airport for freight and mail, with 1.9 million tonnes.
[[File:Air Passenger Transport 2020-2019 V4.xlsx]]

This article analyses recent data on air transport in the European Union (EU), both for passengers and freight and mail. It presents data on air passengers transported, showing the impact of the COVID-19 pandemic in 2020. The role of air transport in freight transport is less pronounced, as aircraft are an expensive transport mode in terms of tonne-kilometres and only competitive for longer distances and relatively light high-value or perishable goods.

The article distinguishes national (domestic), intra- and extra-EU transport, and also takes a look at the relative significance and ranking of airports.

To prevent the spread of the COVID-19 pandemic, countries around the world have taken a variety of restrictive measures since the beginning of 2020. The air transport industry was severely hit.In 2020, the total number of passengers travelling by air in the EU was 277 million, an substantial decrease of 73.3 % compared with 2019 (Figure 1). All Member States registered large drops in 2020 compared with 2019. The highest fall was observed for Slovenia (-83.3 %), followed by Slovakia (-82.4 %) and Croatia (-81.9 %). Among the remaining EU Member States, 20 recorded a decline by 70 % or more over the same period. The four remaining Member States registered drops of more than 65 %; the lowest decrease being observed for Luxembourg (-67.3 %). 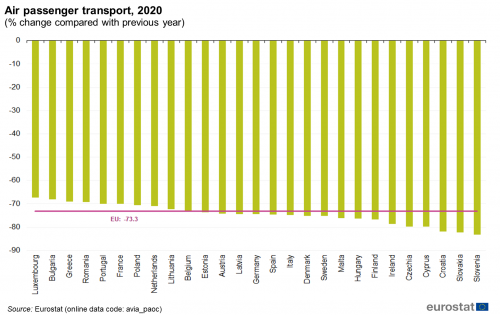 Figure 2 shows the year-on-year monthly and quarterly growth in air passenger transport for 2020 in the EU. The first impact of the COVID-19 restrictions was visible in March 2020, with a 61.6 % decrease of the number of passengers in the EU compared with March 2019. The restrictions led to substantial falls in the number of commercial flights in all following months of 2020. The greatest decline was observed in April (-99.0 % compared with the same month in 2019). In May and June, the declines were greater than 90 %. In the second half of the year, the drops were still significant. The most impacted month in the second semester was November with an 88.4 % decrease compared with November 2019. The less impacted month was August, but still with a substantial drop of 72.5 %. 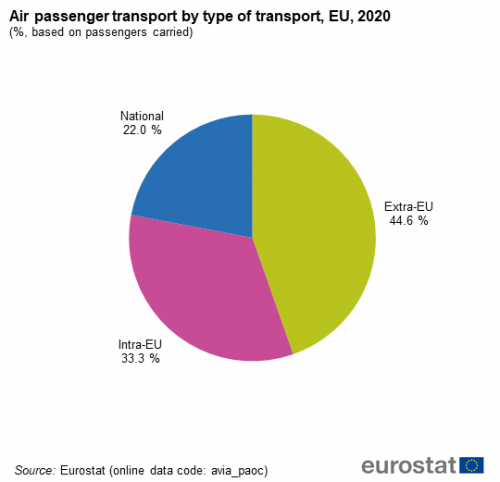 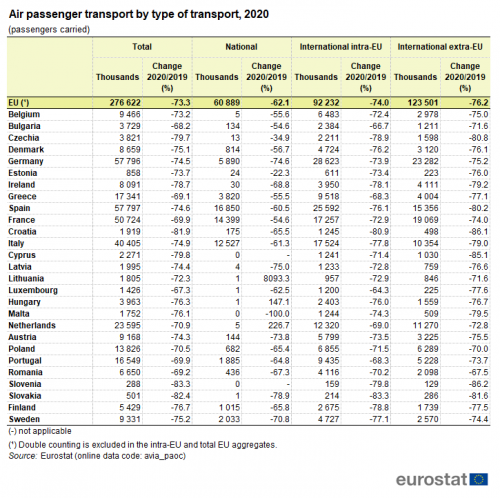 Table 2 presents the top ten Member State-to-Member State flows registered in 2020. Among the top ten routes, Germany is involved in five, the most significant one being the traffic between Spain and Germany which represented one fifth of the top ten passenger routes and 7.4 % of all intra-EU transport. Not surprisingly, all routes showed substantial falls between 2019 and 2020 from -57.6 % to -79.2 %. 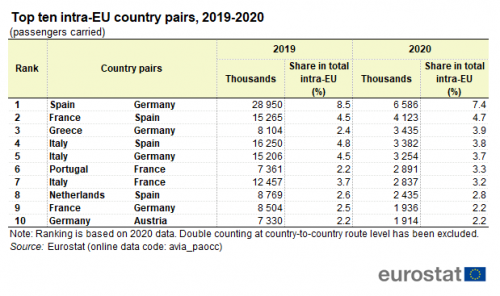 Map 1 gives an overall picture of the extra-EU market. Europe except EU was the main origin/destination of passengers travelling by air in 2020, with 60.4 % of the total extra-EU transport. The lowest share was observed for Oceania and southern polar regions (0.1 %). Transport with all areas in the world decreased substantially. In relative terms, the highest decrease was observed for transport with North America (-82.9 %) while the lowest fall was recorded for transport with Oceania and southern polar regions (-39.0 %). 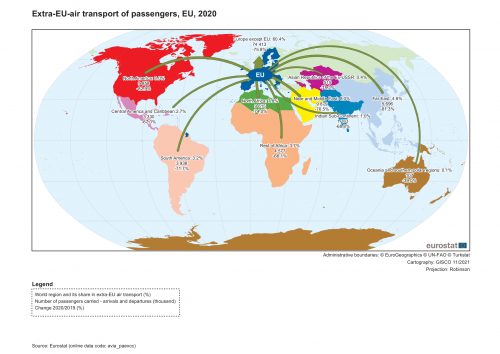 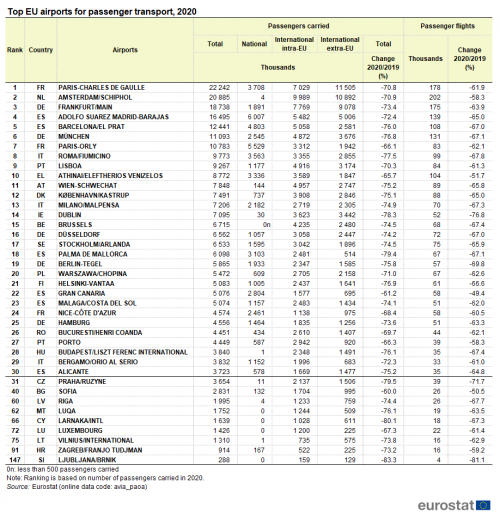 Map 2 presents the top ten airport pairs within the EU. It is worth noting that all routes were domestic ones. The connection with the highest number of passengers in 2020 was between the airports of Palma de Mallorca and Barcelona El Prat, with 821 thousand passengers. All routes registered substantial decreases between 2019 and 2020, ranging between -70.7 % for the connection Madrid Barajas - Barcelona El Prat and -33.9 % for Paris Charles de Gaulle – Nice Côte d’Azur. 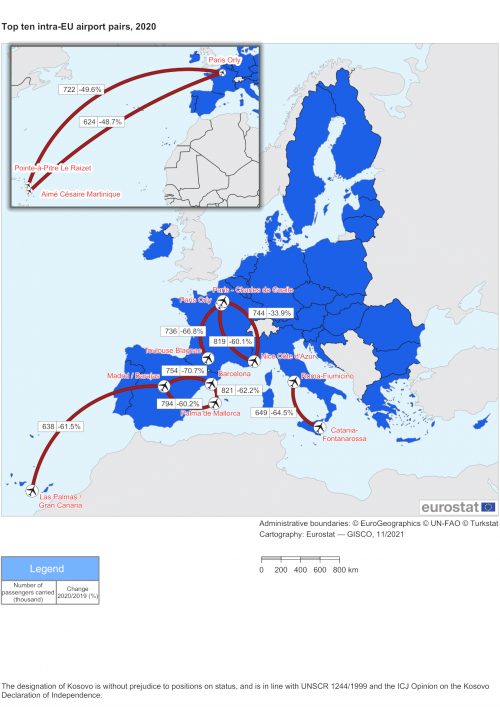 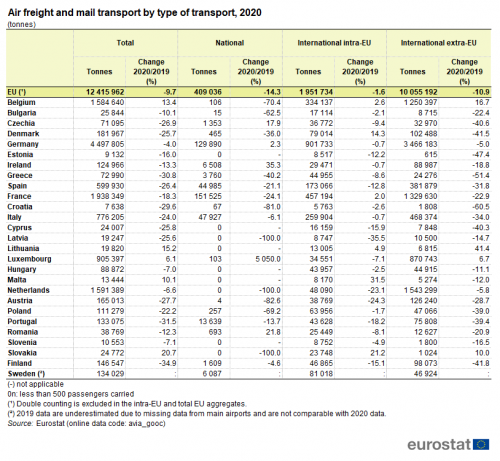 In 2020, Frankfurt Main was the main EU airport in terms of tonnes of freight and mail loaded/unloaded, with 1.9 million tonnes (Table 5). Paris Charles de Gaulle, which is the biggest EU airport in terms of passenger transport, came second with 1.7 million tonnes. Among the top 20 airports, six registered a growth between 2019 and 2020 in terms of total freight and mail loaded/unloaded. Frankfurt Hahn recorded the highest increase (+42.8 %), followed by Liege (+26.9 %), Maastricht Aachen (+22.1 %) and Leipzig Halle (+12.2 %). In contrast, München recorded the biggest drop (-57.0 %) between 2019 and 2020. Among the remaining airports, six recorded a decline by more than 20 % over the same period. Three other airports registered drops between 15 % and 20 %. 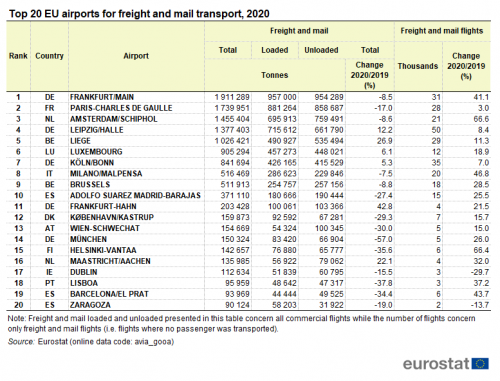 All EFTA and candidate countries recorded decreases higher than 60 % in terms of passengers transported (Table 6). Montenegro was the most impacted country with a 80.3 % drop. The evolution of freight and mail transport by air between 2019 and 2020 also decreased in all countries, with changes ranking from -5.9 % in Norway to -61.4 % in Montenegro. 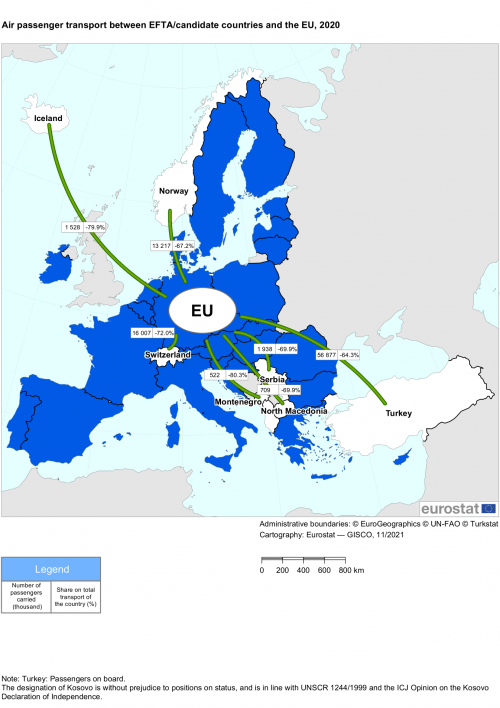 More recent passenger data are available in Eurobase for a number of countries, as due to the importance of aviation in measuring recovery from the Covid crisis, Eurostat is encouraging reporting countries to provide statistics on passenger transported by air in advance of the regulatory deadline. For some countries the data are available already up to 3 months after the end of a reference month.

Traffic on a commercial air service identified by a unique flight number subdivided by airport pairs in accordance with the point of embarkation and point of disembarkation on that flight. This is linked to the definition of passengers carried.

All passengers on a particular flight counted once only and not repeatedly on each individual stage of that flight. This excludes direct transit passengers.

All freight and mail loaded onto or unloaded from an aircraft. This excludes direct transit freight and mail. In principle, information provided in this article is based on On Flight Origin/Destination (OFOD) data. Only when OFOD data have not been reported have airport declarations been used.

In principle, this article covers air transport to and from any airports in the reporting countries with more than 150 000 passengers annually.

Double counting: the national aggregates and total intra-EU aggregates exclude any double counting. It includes all the departures figures reported plus "a part of" arrivals declarations, "a part of" including those arrivals declarations for which the corresponding departures declarations of the partner airport are missing. m Table 1: the figures (and related shares) for the country-country flows have been calculated by excluding the double counting at country-to-country route level. The figures are derived from table avia_paocc; the double counting for identical routes is excluded in order to obtain the correct total for country pairs. The data can be extracted from the aviation domain of the Eurostat on-line database or obtained upon request.

Map 1: the component countries comprising the world regions as defined for this map are based on the geonomenclature used by Eurostat for external trade statistics. The components of each world region can be extracted from the aviation domain of the Eurostat on-line database or obtained upon request. Some care should be taken in drawing conclusions as regards world regional shares due to the fact that passengers who either stop-over or change planes en-route will be allocated to the country in which they made their connections and not to the country of first origin or final destination.

Map 2: the total figures for each pair of airports have been calculated by adding together the ‘Departures’ declarations of the two airports concerned.