Air safety statistics in the EU

Highlights
Tweet
There were 198 fatalities in commercial air transport accidents and 777 fatalities in other aviation category accidents on EU territory between 2015-2019, involving EU-registered aircrafts.

Detailed data from the European Aviation Safety Agency (EASA) show a good safety record for commercial air transport in the European Union over the past years, particularly among EU-registered operators. However, a single major accident, as experienced in 2015, can seriously affect this generally positive image. Most fatalities are recorded in general aviation and more specifically in light aircraft (under 2250 kg maximum take-off mass (MTOM)).

EASA is an agency of the European Union, governed by European public law. EASA has established common requirements for the regulation of safety and environmental sustainability in civil aviation. It collects detailed data on aviation incidents and accidents and performs in-depth safety-relevant analyses.

Overview of fatalities in air transport in the EU

In its Annual Safety Review 2018, the European Aviation Safety Agency (EASA) highlighted that 2017 was an exceptional year for global airline safety, with fewer fatalities than at any time in the industry’s history (155 deaths only). In the Annual Safety Review 2019, EASA reminded that there is no room for complacency, after the increase observed: 189 persons in total died in aviation accidents on EU territory in 2018, involving aircraft registered in the Member States of the European Union. 2019 recorded a slight decrease, with 173 fatalities. As every year, most of the air accident fatalities in 2019 (80 %) were registered in the category “General aviation” (see Figure 1), more specifically in the sub-category of aircraft with a maximum take-off mass (MTOM) of less than 2250 kg. This sub-category comprises small aeroplanes, gliders, “microlights”, as well as hot air balloons. Compared with 2015, which is the year where most of the air transport fatalities were recorded over the period 1990-2019 in the category “Commercial air transport”, only 9.2 % of the fatalities in 2019 fell into this category (16 fatalities), 18 fatalities (10.4 %) were registered in “Aerial work” accidents while only 1 person was killed in “General aviation” accident involving large aircrafts over 2250 kg MTOM accidents in 2019. 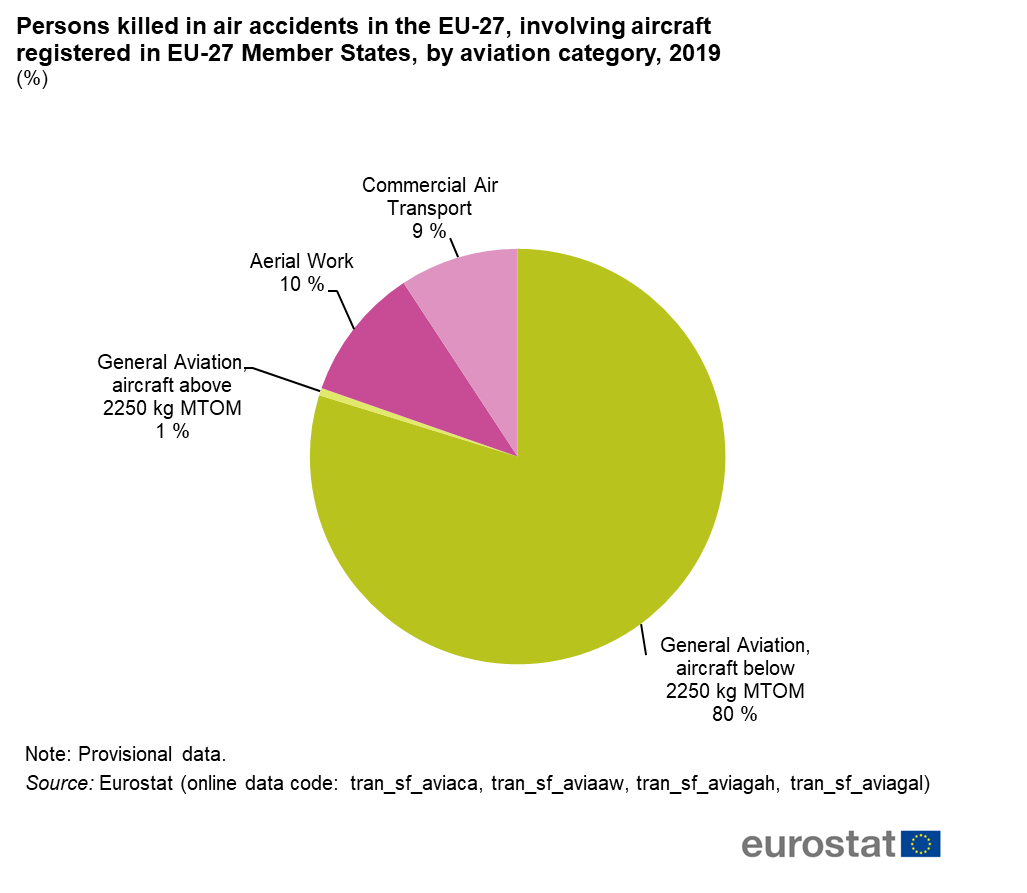 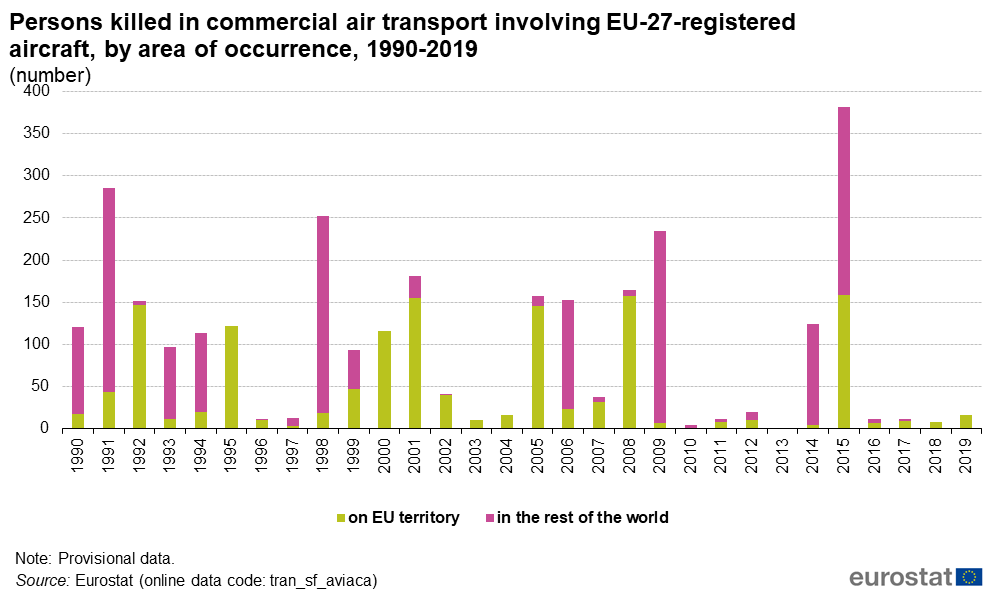 There have also been other fatal air transport accidents in the airspace of the European Union, involving aircraft that were not registered in the European Union. Figure 3 presents the number of all fatalities in commercial air transport accidents since 1990 on EU territory, regardless of whether the aircraft involved were registered in an EU member State or in another country. Thus, the information in Figure 3 includes accidents such as the crash of a Ukrainian-registered passenger aircraft close to Thessaloniki/Greece in 1997 (70 fatalities) and the mid-air collision between a Russian passenger aircraft and a Bahraini-registered cargo aircraft over south Germany in 2002 (71 victims). However, the previously mentioned accidents involving an Irish-registered aircraft on the Sinai Peninsula (Egypt) and a French-registered aircraft in Irkutsk (Russia) are not included in the data presented in Figure 3, as these occurred outside EU territory. 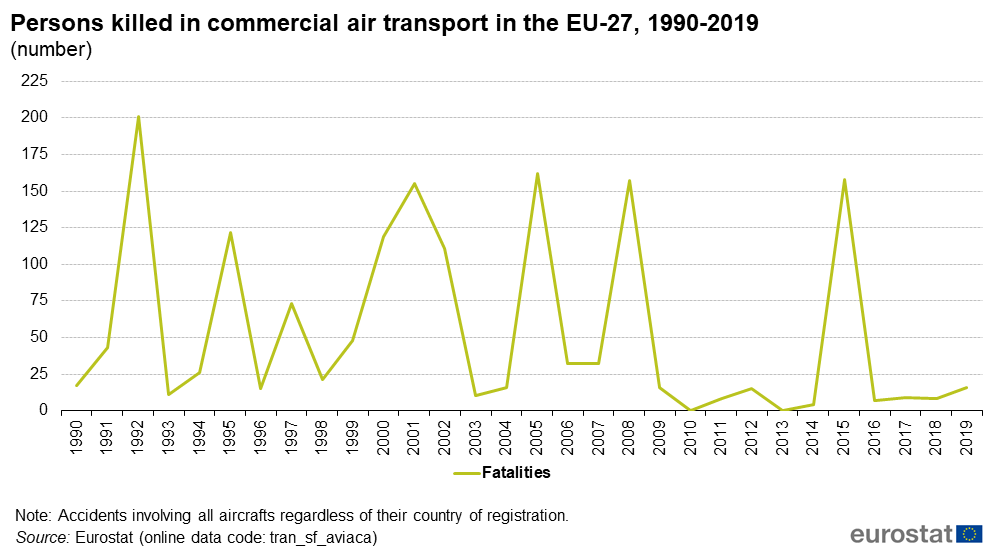 The year 1992 experienced a particularly high number of fatalities. This was in large part caused by three major crashes: a French aircraft in the Vosges mountains in France (87 deaths), a Dutch aircraft at Faro (Portugal) airport (56 fatalities, 305 injured) and an Israeli-registered cargo plane in an Amsterdam suburb (47 fatalities, of which 43 on the ground). The only years when not a single person was killed in an air transport accident in the European Union were 2010 and 2013.

Aerial work denotes the operation of aircraft for specialised services, such as agriculture, construction, photography, surveying, observation and patrol, search and rescue as well as aerial advertisement.

Between 2015 and 2019, the number of persons killed in Aerial work accidents involving aircraft registered in EU Member States fluctuated between 8 and 26. The death toll in 2019 was 18 persons (10.4 % of the total), a slight increase compared with previous years, with 7 fatalities in 2018 and 8 in 2017. In 2019, half of the 18 fatalities registered occurred in Sweden, due to parachute drops. In 2015, there was one major accident involving Aerial work / Part special operations (SPO) with aeroplanes: a collision in the air between two LET-410 aircraft taking part in parachuting operations in Slovakia led to 7 fatalities. This accident led to a considerably higher number of fatalities in 2015 than the 10-year annual average, although the actual number of accidents with fatalities was in line with the 10-year average.

General aviation (aeroplanes and helicopters) consists of all civil aviation operations other than commercial air transport and specific types of aerial work operations. General aviation has two sub-categories: operations with aircraft with a maximum take-off mass (MTOM) above 2250 kg and under 2250 kg.

General aviation is the category where most accidents occur. In most years, most of the fatalities recorded in air transport are registered in this category. An exception was the year 2015, when a high number of fatalities were recorded in commercial air transport due to the Germanwings crash mentioned above.

For light general aviation, i.e. involving aircraft under 2250 kg MTOM, 138 persons lost their lives in accidents with EU-registered aircraft within the EU-27 territory in 2019. This category includes, in addition to smaller aeroplanes, balloons, dirigibles, para- and motorgliders, microlights and small helicopters. EASA’s annual safety review notes that most fatalities occur in accidents with small aeroplanes (especially during the landing phase) and gliders.

Detailed 2015-2019 data by aviation category and by country

Most fatalities in accidents falling under the rather broad category ‘General aviation’, and more specifically aircraft under 2 250 kg MTOM, occurred with aircraft registered in France and Germany. As small aircraft were involved, such accidents often occur in the country in which the aircraft is registered. However, in the other aviation categories, differences between the country of registry of the aircraft and the country of occurrence of the accident can be higher. Similar to Figure 3 on fatalities in commercial air transport on EU-27 territory 1990-2019, Table 2 details the number of fatalities for the period 2015 to 2019 that occurred on the territory of the individual EU Member States, regardless of the country of registration of the aircraft involved. 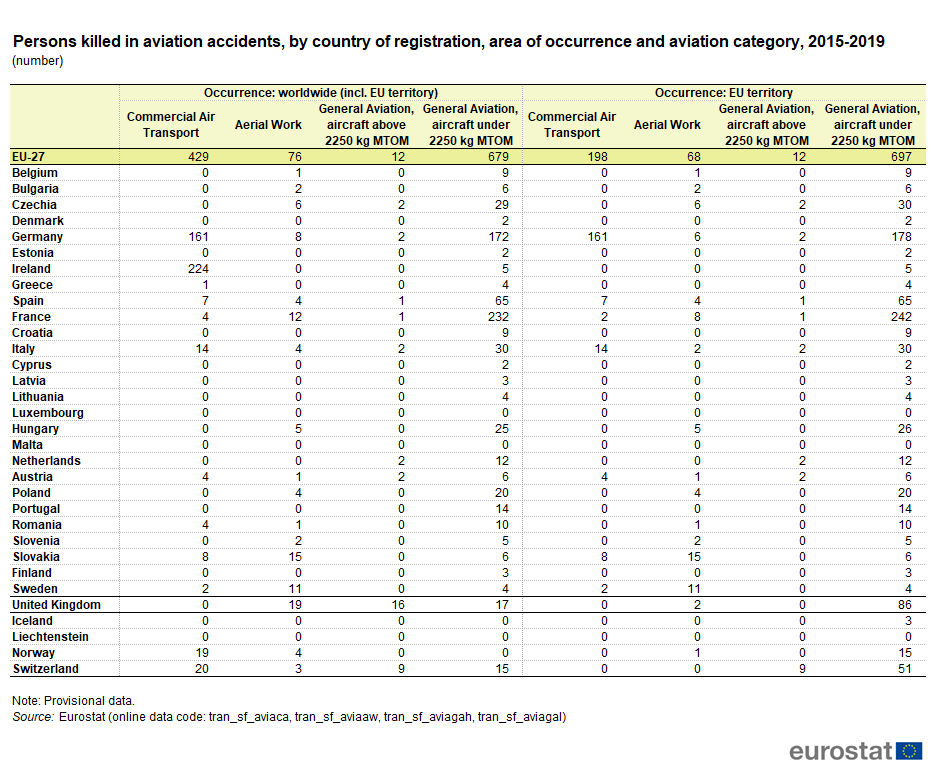 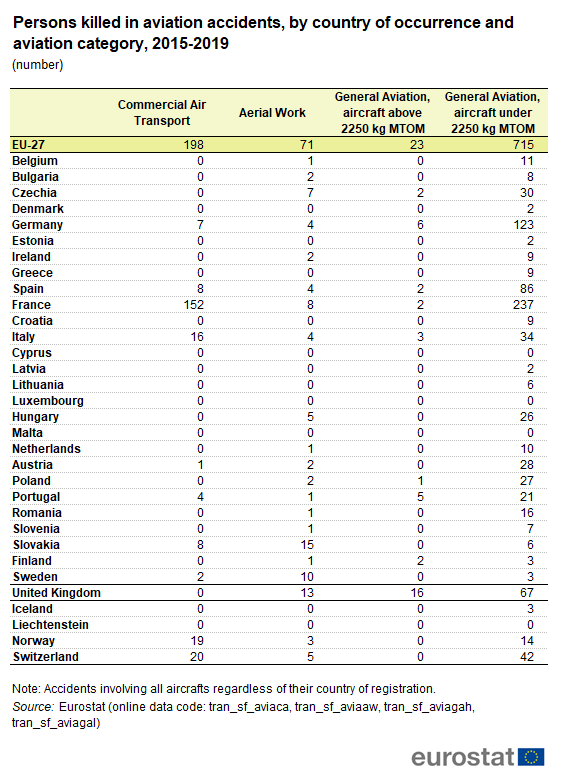 On 30.03.2015 an Administrative Arrangement between Eurostat and the European Aviation Safety Agency (EASA) was signed regarding the technical cooperation in the field of air transport safety statistics.

The data presented in this article stem from the European Aviation Safety Agency (EASA). The EASA is an agency of the European Union and governed by European public law and establishes common requirements for the regulation of safety and environmental sustainability in civil aviation. EASA was set up by a Council and Parliament regulation (Regulation (EC) 1592/2002 repealed by Regulation (EC) No 216/2008 and amended by Regulation (EC) 1108/2009). The EASA collects detailed data on aviation incidents and accidents and performs detailed safety-relevant analyses as far as possible. The agreement between EASA and Eurostat allows for the dissemination of selected statistical data through Eurostat’s dissemination database (Eurobase).

All data displayed in this article are annual, with available time series going back to 1990 for commercial air transport and general aviation with aircraft over 2250 kg MTOM. For the other categories, data are somewhat less reliable and are only available since 2006. Data for 2017, 2018 and 2019 should be considered provisional, as accident investigations may still be ongoing. The conclusions of the final investigation reports might therefore slightly alter the figures.

The implementation of the Single European Sky (various legislative packages, 2004-2014) has resulted in a considerable increase in air traffic and the number of air carriers.

Aviation safety in the European Union is based on close cooperation between the European Commission, the EASA, Eurocontrol and the national civil aviation authorities, but also with aircraft manufacturers, airlines, and, considering the inherently international nature of air transport, the International Civil Aviation Organization (ICAO). The backbone of this cooperation is a set of common safety rules, directly applicable in a uniform manner across the EU. Safety checks are performed at European airports on a random basis, but with particular attention to companies which have previously shown safety deficiencies. This can lead to restrictions or even the banning of non-compliant air carriers from flying to Europe.