Data from July 2014. Most recent data: Further Eurostat information, Main tables and Database. Next update of the article: March 2019

This article is part of a set of articles on disability and provides information on people with basic activity difficulties and/or a longstanding health problem causing work limitations. The information is based on the data of the 2011 ad-hoc module of the EU Labour force survey (LFS-AHM). It offers an overview of access to the labour market for the working age population, i.e. people aged between 15 and 64. Apart from information on the European Union (EU) and its individual Member States, data for Iceland, Switzerland and Turkey is also available.

Different aspects of access to the labour market are covered in this article, such as employment and unemployment rates, inactive persons, temporary work, reasons for not seeking employment and reasons for leaving the last job. Results presented have been compiled according to two definitions of disability: 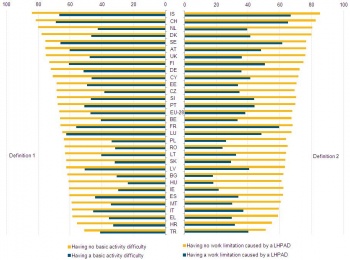 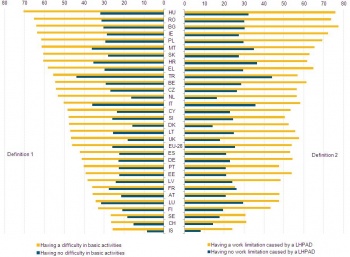 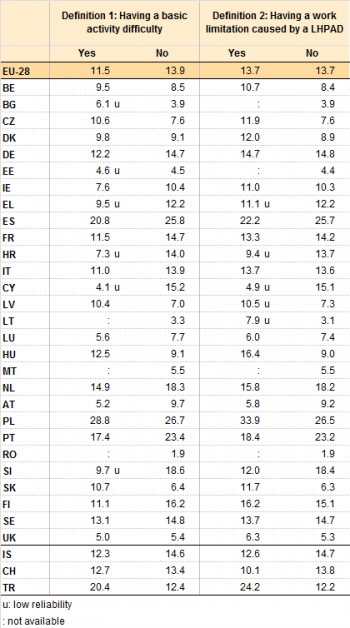 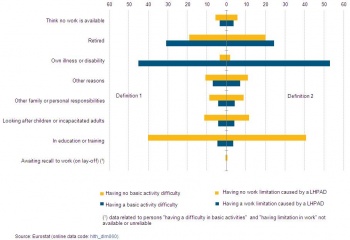 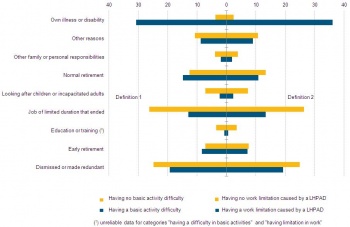 Using the first definition of disability, the employment rate of people with basic activity difficulties in the EU-28 in 2011 was 47.3 % (see Figure 1), almost 20 percentage points below that of people without such difficulties. At country level, the highest gaps in employment rate were observed in the Netherlands (43 % and 80 % respectively) and Hungary (24 % and 61 %), with differences of more than 37 percentage points between the groups. This contrasts sharply with the situation in Luxembourg, where the smallest variation was observed (2 percentage points).

As the second definition of disability refers to people reporting a limitation in work because of a LHPAD, the employment rate recorded at EU-28 level for this category is unsurprisingly lower (38.1 %), nearly 30 percentage points less than people who did not declare a limitation in work.

A fairly similar picture is observed in all countries, with a gap of over 40 percentage points between people with and without work limitations in some countries (United Kingdom, Ireland, Romania, the Netherlands, Hungary and Bulgaria). At the other end of the scale, France reported the lowest difference at 8 percentage points.

Looking beyond the borders of the European Union and irrespective of the definition considered, the highest employment rates were reported for Switzerland and Iceland.

Lower impact of LHPAD on unemployment in Greece and Turkey

The unemployment rate of people with basic activity difficulties (Definition 1) in the EU-28 countries was 12.1 % in 2011 (see Table 1). This is 2.5 percentage points more than people without difficulties. The highest gaps were observed in Hungary and the Czech Republic (both over 9 percentage points). In Turkey (7.5 % and 8.9 %), Luxembourg (4.9 % and 5.3 %) and Greece (14.6 % and 16.7 %) the unemployment rate among people without any activity difficulty was actually higher than those with difficulties.

Using the second definition of disability, the unemployment rate for people limited in work because of LHPAD was 17.4 % in the EU-28 in 2011, compared with 9.4 % for those without health problems or activity difficulties. The highest gaps (exceeding 14 percentage points) were observed in Hungary, the Czech Republic, Germany and Estonia. As already noted for the first definition, Turkey and Greece recorded lower unemployment rates among people with work limitations.

Whatever definition of disability is considered, the highest inactivity rates for persons with disabilities were observed in Hungary, Bulgaria, Romania and Ireland, and the lowest in Iceland, Switzerland and Sweden (see Figure 2).

In 14 countries more than 50 % of those with basic activities difficulties were inactive in 2011 (see Figure 2). This share was reached by 22 countries using the second definition. Nevertheless, this general situation does not hold for Iceland and particularly France, where the rate of inactive people was higher for persons with basic activity difficulties only. In Iceland, the gap was limited to only 2 percentage points, but in France a difference of 11 percentage points was observed.

The following section is limited to employees (i.e. excluding the self-employed), and looks at the share of temporary employment among employees with and without a disability.

Using the second definition of disability, a more contrasted pattern was observed, even if the share of temporary employees at EU-28 level wasthe same (13.7 % for both groups).

Own illness or disability: major reason for not seeking employment by disabled people

Among the inactive disabled population aged 15 to 64, an illness or disability was unsurprisingly the main reason stated for not seeking employment (see Figure 3). This reason was most frequently mentioned by persons aged 25-54 (data not shown).

For persons without disabilities, the main reason mentioned was “education or training”, which appears to be logical, particularly for the lower end of the age group 15-64. The second most frequently stated reason declared by all inactive people (both disabled and not disabled) was retirement. Here, the focus is obviously at the upper end of the age range.

At the country level (data not shown) more specific patterns were observed: among persons with work limitations, the most frequently mentioned reason in Sweden after “own illness or disability” was “education and training” (around 20 %). In Spain and Cyprus, the second most often stated reason was “other family or personal responsibilities” (17 % and 18 % respectively). The latter reason came top in Turkey by a large margin, being stated by more than half (between 51 % and 54 %) of all respondents (having a disability or not, whatever the definition considered).

In 2011, at the EU-28 level, the main reason for leaving the last job was “own illness or disability” for more than 30 % of disabled persons who were not employed but had worked previously (see Figure 4), especially among those aged 35-44 (data not shown). Among all not-employed persons (with or without disabilities) “job of limited duration that ended” was the most reported cause for 15 to 34 year olds.

All statistics presented in this article are derived from the European Union Labour force survey (EU-LFS). This is a quarterly, large sample survey providing results for the population living in private households in the EU, EFTA and the candidate countries.

The UN Convention on the Rights of People with Disabilities (UNCRPD) recognizes in Article 27 “the right of persons with disabilities to work, on an equal basis with others; this includes the right to the opportunity to gain a living by work freely chosen or accepted in a labour market and work environment that is open, inclusive and accessible to persons with disabilities”. This includes prohibition of discrimination, protection of rights, access to education, employment in the public and private sector, possibilities for self-employment and support in order to maintain employment on equal terms with others. The OECD acknowledged as far back as 1992 that: “A need for more co-ordination of all policies which affect the labour market participation of people with disabilities is an overriding concern”. The national reports on the employment of disabled people in European countries provide evidence of widespread initiatives in policy and legislation in recent years. These include, for example, the right to an interview (e.g. in Poland and Denmark), assistance in adaptation of the workplace, employer incentives/subsidies, rights to flexible working, job matching, personal assistance at work, support for self-employment, etc. Although many initiatives have been taken, and more focus has been given to the integration of disabled people, more can be done. There is thus still a need for more knowledge, and more co-ordination in the area. Indeed, there is a relative lack of information about the types of jobs and sectors that disabled people are employed in, not least because many disabled people employed in the ordinary labour market are not recognised or measured in reported figures, e.g. because they are not recorded as having work limitations or receiving specific support services.