This article presents the services producer price index (SPPI) (also called service output price index), measuring prices of services, as it is calculated and used at the level of the European Union (EU) and its Member States.

The services producer price index is a business cycle indicator which provides information on the development of prices for numerous service industries. This information is used for the analysis of inflation and its sources, but also for the deflation of value measures in the service sector.

This article presents services producer prices for all uses (B2All indicators), i.e. services consumed by private consumers, by business consumers and others. However, the bulk of the service industries covered by the indicator are those which are, as a matter of fact, mainly demanded by businesses (B2B indicator, including also transaction with the Government/State, i.e. B2G), they include for example freight transport, legal and accounting services, advertising and market research (see below).

Between their introduction in 2006 and mid-2008, aggregated services producer prices showed a relatively steady increase. During the economic and financial crisis prices fell between mid-2008 and mid-2009. Since the third quarter of 2009, prices have been more or less steadily increasing and the price aggregate for the euro area already surpassed the pre-crisis high at the end of 2014. At the beginning of 2016, prices dropped again but afterwards recovered quickly. Today the overall level of service producer prices in the European Union and the euro area is around 4 percentage points higher then during the pre-crisis peak.

Figure 2 provides an overview of prices for various transport services. In general, transport services show a relatively steady increasing trend, especially for road transport and warehousing and transport support services. Air transport is also on a long term increase but with a clear period pattern of price increases in the second and third quarter and regular price reductions in the fourth quarter. For sea and coastal water transport, producer prices underwent a rather special development with a pronounced fall between the last quarter of 2008 and the second quarter of 2009, possibly reflecting over-capacities at the beginning of the crisis, and an equally steep upturn on the following periods. Despite their relatively small share in the total STS service aggregate, the steep decline in sea and coastal water transport prices (by 34 percentage points) is one of the main reasons behind the drop in the prices of the STS service aggregates.

While prices for postal and courier services have been on a very steady increase since 2006, the prices for telecommunication show a considerable reduction between 2006 and 2016 and since then have remained rather stable. Prices for food services have dynamically and steadily grown since the introduction of service producer prices in 2006. Prices for accommodation services are also on an increasing long term trend but show – just like prices for air transport – a clear seasonal pattern with high levels in spring and summer and lower levels during the winter.

For many business services (Figure 4) the general development since 2006 is more stable than for transport and communication. It can be assumed that many of these services (e.g. cleaning, security) are based on long-term contracts. Moreover, some services such as legal and accounting services may be considered largely indispensable by businesses and were not, or not significantly, reduced during the financial crisis so that there was no incentive for service provides to adjust prices. For many services producer prices displayed a rather stable upward trend.

For computer services (including programming and consultancy) price levels remained almost unchanged. Only prices for advertising and market research showed a reaction to the financial and economic crisis. The indicators for this service area dropped by several percentage points in 2009 but has since then regained and surpassed the pre-crisis level.

Information on output prices of services is generally collected by business surveys. However, for some prices other sources are used, for example information from regulatory bodies for telecommunication prices or for legal services. Web surveys are also used to collect certain price information. The service price indices are calculated on a quarterly basis, data are available from 2006 on. The collection of price data for services poses a number of statistical problems due to the special nature of services. In particular, it is difficult to ascertain the quality of services and therefore difficult to collect price data for services of a comparable nature and quality over time. Measurement problems are also due to the fact that services are often consumed on production and that many services are unique and tailor-made for the client.

Producer prices (output prices) represent the prices from the point of view of the producer. The prices are transaction prices and take into account discounts, rebates, surcharges and similar price-determining elements but not product taxes. There are several important differences between producer prices and consumer prices, notably:

Figure 5 illustrates the difference between consumer and producer prices with the example of postal services. 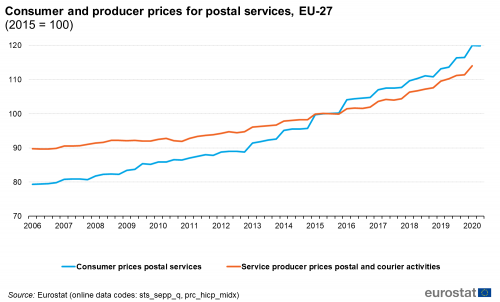 Services are an important part of European economies and contribute substantially to output and employment. Traditionally, short-term statistics mainly covered industrial and construction activities. When the monetary union was prepared it became clear that better and more complete data for the service sector were necessary. Regulation (EC) N0 1158/2005 of 6 July 2005 amended the short-term statistics regulation of 1998 (short-term statistics Regulation (EC) No 1165/98) and introduced the collection of output service prices on a quarterly basis. First data became available in 2009. The service output price index is today one of the Principal European Economic Indicators (PEEIs) which are used to monitor and steer economic policy in the EU and in the euro area. Aggregate service producer price indicators for the total of services covered by the STS-regulation have only been published since June 2012.