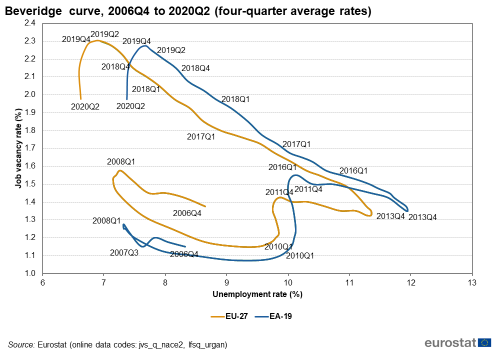 Structural changes in the economy can also generate outward or inward shifts in the Beveridge curve. In the first case, concurrent increases in the vacancy and unemployment rates can be identified at times of uneven growth across regions or industries when the matching efficiency between labour supply and demand decreases. In the case of inward shifts, concurrent decreases in the vacancy and unemployment rates can be observed when the matching efficiency of the labour market improves; this could be, for example, due to a better flow of information on job vacancies thanks to the internet.

The empirical analysis of the curve can be challenging, as both movements along the curve and shifts might be taking place at the same time with different intensities.

For the analysis to be clearer, it was chosen to average JVR figures over four quarters (e.g., the figure for the second quarter of 2020 is calculated as an average of 2019Q3, 2019Q4, 2020Q1 and 2020Q2, and so on for other quarters). For consistency reasons, UR data based on quarterly LFS were also averaged over four quarters. As a consequence, figures used in this publication differ from other releases of Eurostat.

The Beveridge curves for the euro area and the EU-27

Figure 1 shows the Beveridges curves for the euro area (EA-19) and the EU-27. The 2008-2009 worldwide recession and the ensuing sovereign debt crisis had a major impact on the EU labour markets which manifested itself in the unemployment rate soaring and job vacancies plummeting at the same time. From 2010 to 2013, and most notably over the 2010-2011 period, there was a significant outward shift in the Beveridge curves that may reflect disparities across Member States: most of the job vacancies have been created in countries with comparatively low unemployment. From 2014 onwards, we can observe movements along the Beveridge curve caused by an increase of the job vacancy rates in the euro area and the EU-27 going along with a decrease in the unemployment rates in both areas. As of the first quarter of 2020, the COVID19 crisis translated into a marked decrease in job vacancy rates with no impact yet on unemployment rates measured according to the ILO concept.

As a further step in the analysis, one can plot the JVR and the UR of a given country at a given moment in time. This gives an indication of the situation of job matching on the national labour markets. As can be seen in Figure 2, the countries cluster in different groups. At the upper end of the regression curve are the Czechia, Germany and the Netherlands with rather low unemployment and high vacancy rates, while at the lower end of the curve are Greece and Spain with high unemployment and low vacancy rates. The countries above the curve may have a comparatively poorer matching efficiency than countries situated below. It is also to be noted that the countries whose job vacancy statistics do not cover the whole economy, namely, Denmark, France, Italy and Malta, are not included as this may distort the JVR/UR relationship. 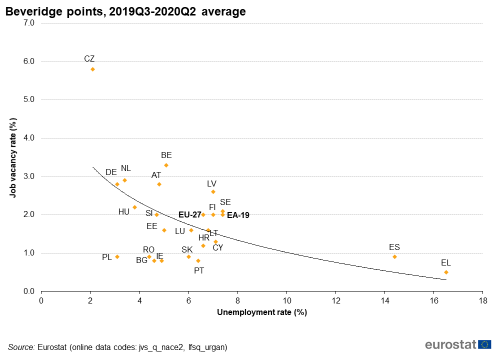 The basis for this analysis are quarterly data on unemployment, vacancies and occupied posts. Quarterly data on job vacancies and occupied posts may be presented as broken down by economic activity and enterprise size. The national statistical authorities responsible for compiling job vacancy statistics send these statistics to Eurostat. Their data are used to compile the job vacancy rate for the EU Member States, the EU-27 and the euro area.

Some of the data provided by the Member States fail to match common criteria and there may be differences in the coverage of the data between countries; as a result, there are currently no EU-27 totals for the actual numbers of job vacancies or occupied posts. The EU-27 and euro area job vacancy rates are calculated on the basis of the information that is available. It is therefore not possible, at present, to calculate EU-27 or euro area job vacancy rates broken down by economic activity or size of enterprise.

The job vacancy rate, in part, reflects the unmet demand for labour, as well as potential mismatches between the skills and availability of those who are unemployed and those sought by employers. Job vacancy statistics are used by the European Commission and the European Central Bank (ECB) to analyse and monitor the evolution of the labour market at national and European level. These statistics are also a key indicator used for an assessment of the business cycle and for a structural analysis of the economy.

Policy developments in this area have mainly focused on trying to improve the labour market by more closely matching supply and demand, through:

EU policies in the area of job vacancies aim to improve the functioning of the labour market by trying to more closely match supply and demand. In order to enable job seekers to consult all vacancies publicised in each of the Member State's employment services, the European job mobility portal EURES was set up.