International trade in services - an overview

Between 2010 and 2018, the fastest growth for trade in services among EU Member States was recorded in Lithuania. 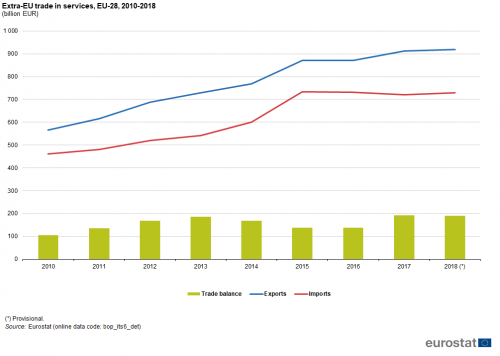 The global value of international trade in goods remains approximately three times as high as that of services. Part of this imbalance may be due to the nature of some services, for example:

The international trade in services statistics presented in this chapter form part of the balance of payments and are also used within national accounts. From the 1990s onwards there was a rapid change in levels of cross-border activity and financial flows, coupled with increasingly mobile individuals. The implications of these changes, in part driven by globalisation, became a major focus for statisticians and formed the basis for a reassessment of the balance of payments, as set out in the sixth edition of the Balance of Payments and International Investment Position Manual (BPM6).

Following the introduction of this sixth edition of the manual, the value of international trade in services was revised upwards as a result of the updated criteria for treating outsourced processing (so-called goods for processing). Under the new guidelines, inward and outward flows of processed goods that do not change ownership should no longer be recorded (with gross values of the goods for each flow) within the current account for goods, but instead should be measured in terms of the value of their processing fee within services. The introduction of this new manual and its associated methodological changes means that statistics on the European Union (EU’s) international trade in services are only available from 2010 onwards.

International trade in services by mode of supply

Trade in services differs from trade in goods in a number of ways. Services often require the physical proximity of a supplier and a customer, for example: if somebody decides to spend a night in a hotel; if they call a tradesman to redecorate their house; or if they have to take their car to the garage for it to be repaired.

The general agreement on trade in services (GATS) defines four different ways — modes of supply — that may be used to deliver services from a supplier to a client/customer. For example, legal services may be supplied by a lawyer to a client as follows:

For further information, see the Eurostat website and an article on modes of supply. 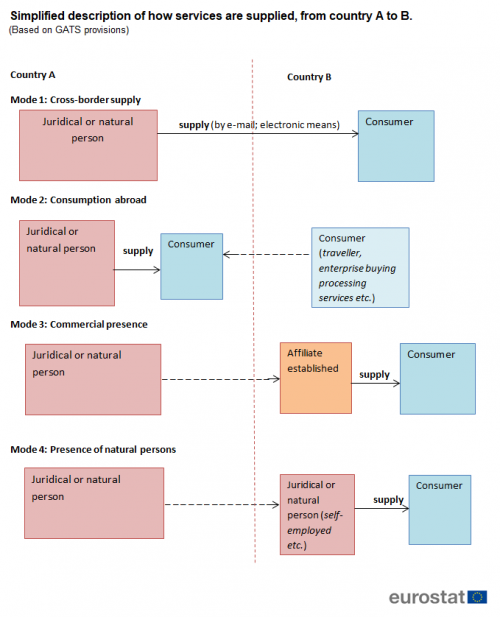 Simplified description of how services are supplied, from country A to B (Based on GATS provisions)

Since 2010, EU international trade in services flows have increased substantially, with the EU's surplus valued at EUR&nbp;190 billion in 2018, 1.6 billion lower than in 2017

In the aftermath of the global financial and economic crisis, the value of EU-28 exports and imports of services to and from non-member countries (also referred to as extra-EU trade) grew strongly during the period from 2010 to 2015. Thereafter, the value of exports grew more moderately while the value of imports stagnated (a very slight decline). The highest annual growth rates for extra-EU exports were in 2012 (up 11.7 %) and 2015 (up 13.5 %), the only years double-digit growth rates were recorded; note these data are based on a series in nominal prices. The highest growth rates for extra-EU imports were registered during 2014 (up 10.7 %) and 2015 (22.1 %). There was a marked change to developments in 2016, as extra-EU exports and imports of services stagnated (down 0.2 % and 0.1 % respectively). Whereas the value of exports increased in 2017 (up 4.8 %), the value of imports contracted again (down 1.6 %). Provisional data for 2018 show modest growth in 2018, up 0.7 % for exports and 1.1 % for imports.

The Trade in Services Agreement (TiSA) is in the process of being negotiated by 23 World Trade Organisation (WTO) members (one of which is the European Union (EU)); together they account for an estimated 70 % of global trade in services. If additional WTO members join the process, it is hoped that any agreement may be extended into a broader multilateral trade deal.

The TiSA architecture is based on the WTO’s general agreement on trade in services (GATS) and all negotiated provisions are compatible with the GATS. TiSA aims to open-up markets and approve common rules in areas such as licensing, financial services, telecommunication services, e-commerce and maritime transport, as well as for professionals who wish to temporarily move abroad in order to provide services. It aims to remove discriminatory rules that act as barriers to entry, and by doing so foreign enterprises should thereafter have the freedom to establish offices and a business presence across a range of additional services in each of the geographical markets.

The talks started formally in March 2013, and by the end of 2013 most participants had indicated which of their service markets they were prepared to open and to what extent. After 21 different negotiation rounds, the talks were put on hold in November 2016; there is no formal deadline for ending the negotiations.

In 2018, the United Kingdom recorded the highest share (15.1 %) of the exports of services by the 28 EU Member States; note these figures for individual Member States are based on world trade flows, in other words, the sum of intra- and extra-EU trade. Germany (13.7 %) and France (11.7 %) were the only other EU Member States to record double-digit shares. In relation to the size of their respective economies, Ireland (8.3 %) and the Netherlands (7.4 %) accounted for relatively large shares of the total (see Figure 2). 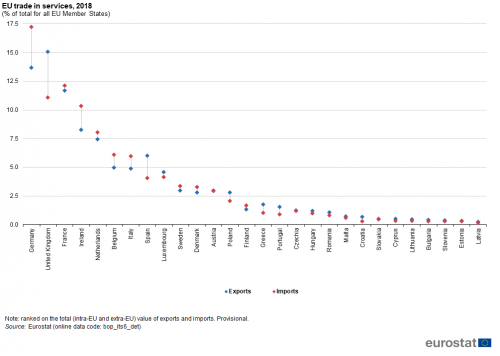 During the period from 2010 to 2018, the highest growth rates for trade in services were recorded in Ireland and Lithuania

Figure 3 presents the average rate of change for international trade in services over the period from 2010 to 2018; note that these growth rates are based on nominal prices. EU-28 exports to non-member countries rose on average by 6.2 % per year during the period under consideration, while the average growth rate for imports was slightly lower, at 5.9 % per year.

The expansion in the value of trade in services (for both intra- and extra-EU partners) was considerably higher in some of the EU Member States, with the fastest growth rates — for both imports and exports — being recorded in Ireland (2012-2018 data), Lithuania and Romania. By contrast, Greece, Italy, Denmark and the Netherlands recorded the slowest increases for trade in services. 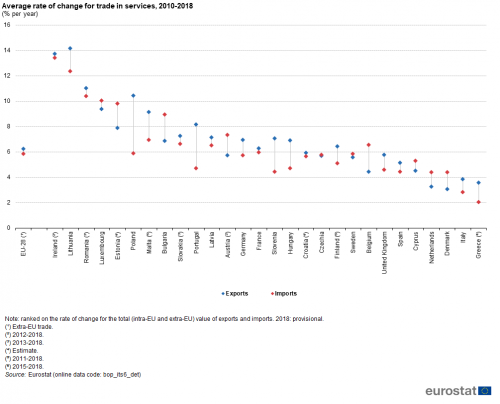 In 2018, the United Kingdom had the highest value of extra-EU exports of services …

By contrast, Germany and Ireland had the highest values of imports of services from non-member countries: EUR 129 billion (17.7 % of EU imports from non-member countries) for Germany and EUR 119 billion (16.3 %) for Ireland. Offshore financial centres were the main origin for imports of services into the Irish economy; these centres are usually small countries/jurisdictions that provide financial services to non-residents on a scale that is incommensurate with the size and the financing of their domestic economy. The United Kingdom (13.8 %), France (10.9 %) and the Netherlands (9.7 %) had the next highest shares of extra-EU services imports in 2018. 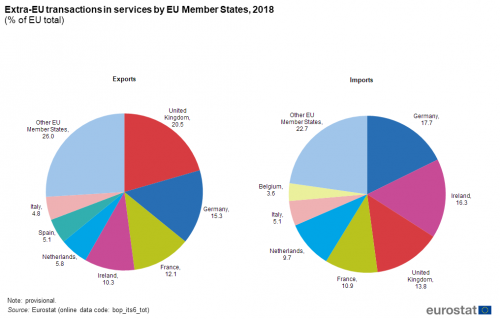 In 2018, the highest values of intra-EU imports and exports of services were recorded in Germany

A similar analysis for intra-EU trade is presented in Figure 5. It shows that Germany had the highest value of services exports to other EU Member States (EUR 150 billion in 2018), which equated to 12.4 % of the total for all 28 EU Member States. France and the United Kingdom (11.3 % and 10.9 %) were the only other Member States to account for a double-digit share of intra-EU exports of services in 2018.

Germany was also the largest importer of services from other EU Member States, with imports valued at EUR 181 billion in 2018, some 16.9 % of the total for the 28 Member States. The next highest shares were recorded in France (13.0 %) and the United Kingdom (9.2 %). 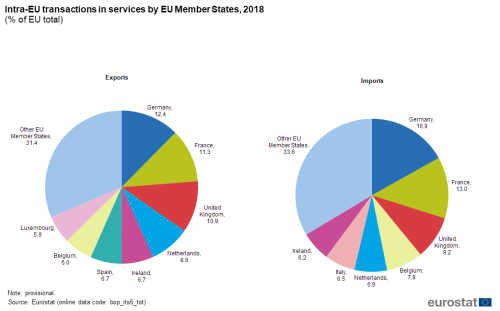