The total sales volume is now equal to 94.1 % of the volume reached in February before the Covid-19 crisis. 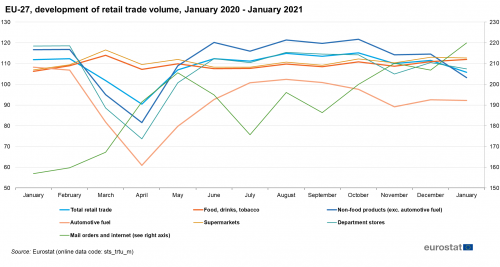 This article is part of an online publication presenting the development of short-term business statistics (STS) indicators in the Covid-19 crisis. The results, presented in this article, concern the development of the retail trade volume indicator. Eurostat will continue to update the information on the effects of the Covid-19 crisis on industrial production, construction, trade and services in the online publication. For the publication of new data see the STS release calendar.

Schools were closed in most Member States in the second week of March 2020. Public events were cancelled by almost all Member States and private gatherings (with numbers of persons varying from 2 to 50) were banned. In almost all countries, bars, restaurants and hotels were closed. In addition, most countries closed retail shops with the exception of supermarkets, pharmacies and banks. In Italy and Spain, non-essential production was stopped and several countries imposed regional or even national lockdown measures which further stifled the economic activities in many areas.

The large majority of the prevention measures were taken during mid-March. Most of the prevention measures and restrictions were kept throughout the whole of April. In May, several of the measures were abandoned or at least reduced in scope and severity. Among other things, many shops could re-open in May and as a consequence retail trade activities picked up again after two months of unprecedented declines.

With increasing Covid-19 cases after the summer holidays, several countries re-introduced some containment measures in autumn. At first these did not include the closing of retail shops but rather encompassed hygienic measures, social distancing, restrictions on public gatherings etc., and generally affected mainly service providers (e.g. restaurants). However, at the end of October or during November, several countries stepped up the measures which again resulted in the closing of so-called “non-essential” retail shops. In December, some measures were lifted due to the Christmas season. In January, however, the measures became again more drastic in many countries and numerous shops were closed again. The Covid-19 measures strongly affected the retail trade volume in a number of countries and also impacted the European aggregates.

Figure 1 shows the development of the retail trade volume between January 2020 and January 2021 for total retail trade, for food and non-food products and according to the mode of sale.

Regulation (EU) No 2019/2152 of 27 November 2019 (European Business Statistics Regulation) and Commission Implementing Regulation (EU) No 2020/1197 of 30 July 2020 which are applicable for the retail trade short-term indicators as of January 2021 provide for a different activity breakdown of retail trade than the breakdown used in past news releases and articles in Statistics Explained. The former breakdown of retail sales into certain product groups (e.g. textiles, clothes, footwear; pharmaceutical goods; computers and books; electrical goods and furniture) is no longer available.

In March and especially April, the total retail trade volume dropped. There were, however, considerable differences in food and non-food products. Food products and sales in supermarkets increased in March while the sale of non-food products already went down. In April, all product groups recorded strongly declining sales.

In May and June, sales for all non-food product groups picked up again and the February levels of sales were regained or even exceeded for some product groups. This positive trend, however, did not continue in July. The general level of sales dropped slightly and, to some extent, the recovery of sales that had been achieved in May and June was lost again. In August, however, retail sales picked up again in a quite dynamic way. This positive trend did not continue in September, when sales decreased in almost all product groups. In October, sales generally increased again.

In November (or shortly before) several Member States re-introduced containment measures including the shut-down of many stores. This had a strong impact on European retail sales figures. In December, sales somewhat improved as a result of a partial lifting of containment measures. As a result of the general increases in the December 2020 sales volumes, the general level of retail sales was only slightly lower in December than in February, i.e. the month before the outbreak of the crisis. In January, however, a large part of this recovery was lost again and the general sales level is only 94.1 % of the pre-crisis level.

Figure 1 also indicates the levels of retail trade volume according to different modes of sales, i.e. for supermarkets, department stores and for internet sales (a combined index for sales in all specialised stores is not available). Since supermarkets remained generally open during lock-down measures in March and April (and also in November and December), they saw an increase in sales in March. However, sales went back to more normal levels in the following months. The measures taken in recent months did not significantly affect the sales levels of supermarkets. Unlike in spring, when panic-buying increased supermarket turnover, their sales remained relatively stable in recent months.

Department stores which were closed in many countries experienced a decline that was partly compensated when the Covid measures were eased in May and June but sales have not yet returned to the former levels. The closing of many non-essential shops in January 2021 strongly affected the sales in department stores in the EU-27. The sales level is now almost 10 % lower than before the crisis.

Internet sales had already been on the increase for several years. The Covid-19 crisis further boosted this trend and sales via this channel increased quite dynamically in April and May. As shops reopened in the European countries, the development of internet sales was somewhat curbed in June and July. Internet sales vary somewhat from month to month but it appears now that overall they are stabilising at a comparatively high level (note that the index for internet sales is much higher than for other modes of sales; the index is therefore depicted on the right hand axis.)

Table 1 shows the month-on-month growth rates according to product groups and mode of sales for the months from March 2020 to January 2021, as well as the rates for the crisis months from February and April and the rates for the recovery phase and general recovery phase between April 2020 and January 2021. The last column, entitled “recovery”, indicates the relation between the recent January level of the retail trade volume and its February 2020 level (when comparing the recovery levels for different product groups, please note that the individual series are seasonally adjusted separately and that therefore the levels do not simply add up to the total.)

For comparison, Figure 2 shows how the various retail trade categories usually developed on average during the years 2010 – 2019 (to make the various index levels comparable, all years have been re-referenced to an average of 100). Generally, the sales of food products remain relatively stable during the year. For the sale of non-food products there was an average increase recorded during the past years. As Figure 2 indicates, the changes from one month to the next are usually around one index point; the magnitude of the declines and increases in the first half of 2020 is quite unprecedented.

The global financial crisis in 2008 had dramatic effects on the production in industry and construction (for a detailed analysis of the 2008 crisis on STS indicators see here; its effects on retail trade were comparatively modest, however (see Figure 3).

Between January 2008 and January 2009, the total retail volume index for the EU-27 dropped by 2.2 index points, compared with a drop of around 22 points in March and April 2020. The strongest decline in 2008 was measured for automotive fuel (-4.4 points), the index for non-food products (except fuel) dropped by 2.8 points and the index for food, drinks, and tobacco by 1.7 points. Declines in 2020 were much steeper. In April 2020 compared with two months earlier, the index for automotive fuel decreased by around 46 points, the index for other non-food products by more than 35 points. At the same time, the mail orders and internet volume increased by more than 31 index points.

Since the Covid-19 containment measures differed between countries as to timing and strictness, it was to be expected that the effects on retail trade would also vary. Table 2 shows the monthly rates of change between March 2020 and January 2021, as well as the rates between February and April (the months of the crisis) and April and January (generally the months of recovery). The table also includes the ratio between the January 2021 index levels and the February levels (“recovery”).

In December quite a number of countries had already regained or almost regained the sales level of February. With the reinforced containment measures in January 2021 this development was partly reversed. Only one third of countries for which data are available have regained or surpassed the sales level of February 2020 (Belgium, Estonia, Luxembourg, Poland, Finland, Sweden). As the development over the last months shows, however, the order of the countries that regain or come close to the February level changes from month to month. 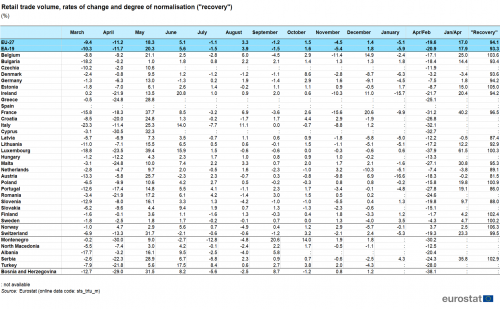 The latest results for the development of retail trade are published in monthly news releases by Eurostat.

According to the STS-Regulation the retail trade volume index is published only 30 days after its reference months. At this early stage it is normal that no complete coverage of data can be ensured by National Statistical Institutes and that data have to be estimated to some degree. As a consequence, revisions occur during the publications that follow.

The Covid-19 crisis posed additional problems for data collections, since for example closed shops could not be reached or did not supply any data. Moreover, it was not clear if missing data might not be due to businesses being permanently closed. As a consequence, it may be expected that revisions of the first retail volume data could be subject to greater revisions than is usually the case.