General government expenditure in the EU on environmental protection amounted to 0.8 % of GDP in 2019. 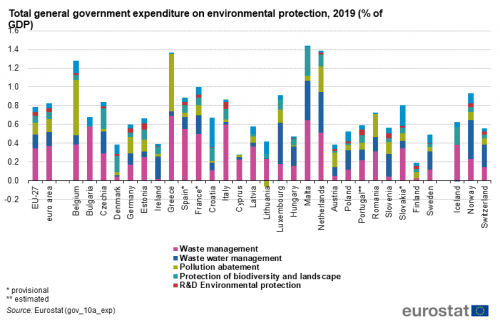 'Waste management' accounted for 0.7 % of GDP in Greece in 2019, followed by 0.6 % in Bulgaria, Italy and Malta, which were the highest expenditure levels in this group.

The highest ratios to GDP for 'waste water management' were reported by Luxembourg, Malta, the Netherlands and Norway (all 0.4 % of GDP in 2019), while Belgium and Greece reported the highest ratio in the EU for 'pollution abatement' (0.6 % of GDP). For Belgium and Greece, this is largely due to tax-subsidy schemes for renewable energy. For the 'protection of biodiversity and landscape', Member States devoted between 0.3 % and 0.1 % of GDP or less than this in 2019, Malta was the country that had distinctly the largest expenditure in this function (0.3 % of GDP). 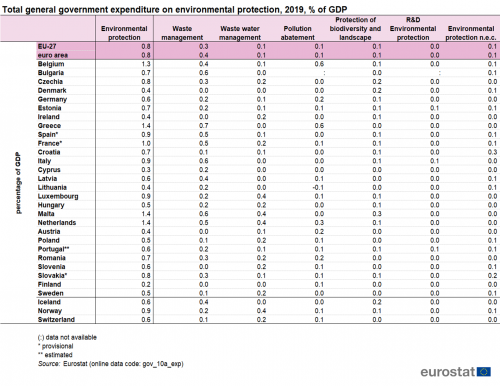 For 'environmental protection', the groups are