Total euro area trade with non-member countries increased between 2009 and 2019 with an average annual growth of 6 %.

In 2019, a third of euro area trade with non-member countries was with the United States, China and the United Kingdom.

The main products traded by the euro area in 2019 were machinery and vehicles.

The aim of this article is to provide an overview of the main characteristics of the extra-euro area trade in goods. All the series have been recalculated to include all the 19 members of the euro area (EA-19). 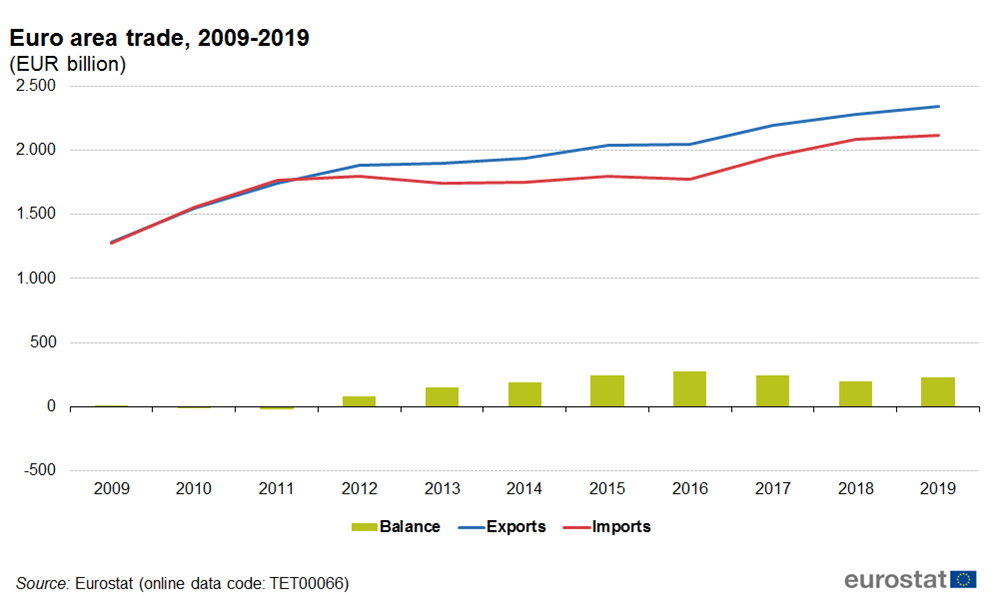 In 2019, the United States was the leading partner for extra EA-19 trade exports of goods (Figure 2) with a share of 15 %. It was followed by the United Kingdom with 12 % and China with 8 % (see remark in data sources section about comparability). The same three countries were also the three largest partners for extra-EA-19 imports of goods. Here China (14 %) was the largest , followed by the United States (10 %) and the United Kingdom (8 %). These top 3 partners combined account for around one third of all extra EA-19 exports and imports. 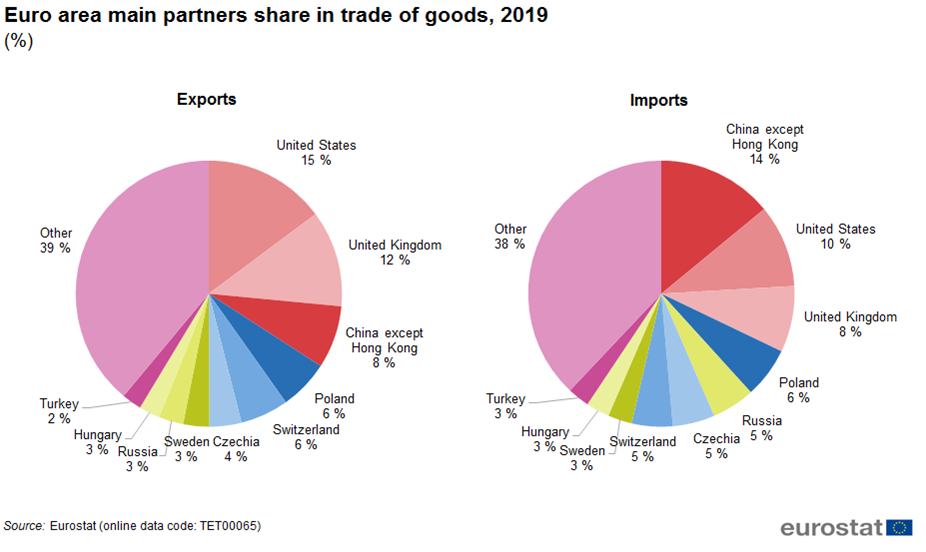 Exports from the euro area (Figure 3) increased by EUR 152 billion between 2017 and 2019. The United States had the largest increase (EUR 52 billion), followed by China (EUR 18 billion), Poland (EUR 14 billion) and Switzerland (EUR 13 billion). Among the top 10 partners, exports decreased only for the United Kingdom (EUR -2 billion) and Turkey (EUR -7 billion). However, the United Kingdom remains the second largest export destination in extra EA-19 trade behind the United States. 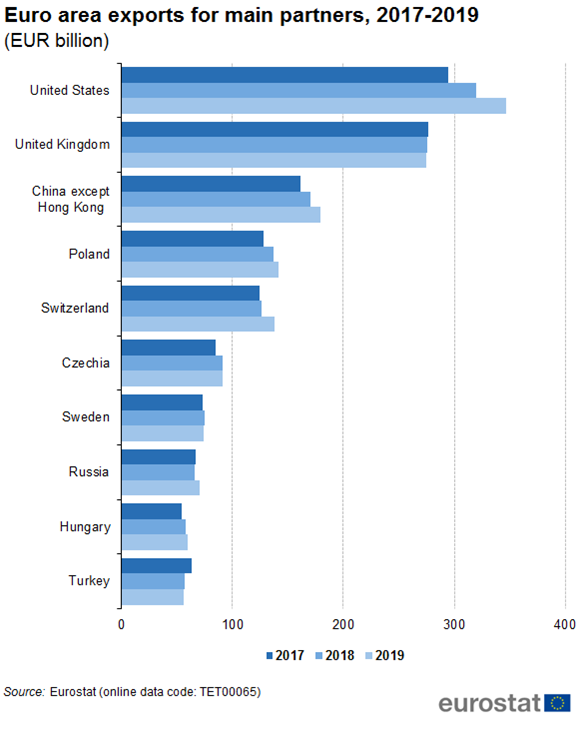 Imports of goods to the euro area (Figure 4) increased by EUR 168 billion between 2017 and 2019. China (EUR 26 billion) and the United States (EUR 25 billion) had the largest increases. Imports from Poland (EUR 17 billion) and Switzerland (EUR 11 billion) were the only other top 10 partners where imports increased by more than EUR 10 billion). 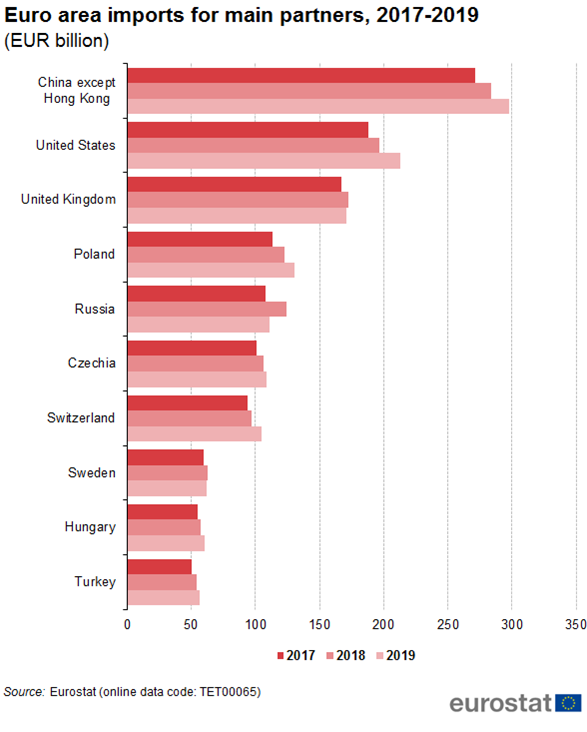 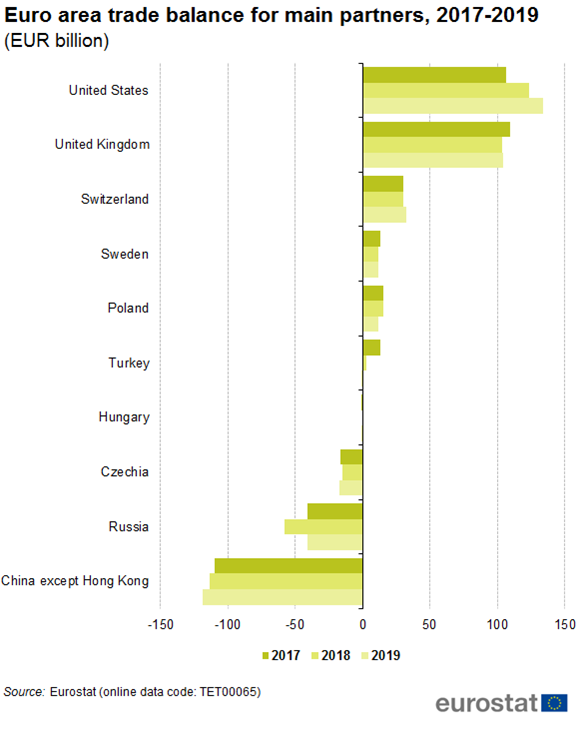 The only other product group with a share of more than 10 % of trade was 'chemicals' with a value of EUR 690 billion. From this, EUR 437 billion of those were exports, which was 19 % of all exports. Imports of 'chemicals' amounted to 253 billion representing 12 % of all imports in this product group. Compared with 2017, exports were up EUR 52 billion and imports were up 22 billion. Thus, the trade balance for 'chemicals' rose by EUR 30 billion to 184 EUR billion in 2019.

The euro area also has trade surpluses in 'food and drink' (EUR 37 billion) and 'other goods' (EUR 16 billion). It has a small trade deficit in 'raw materials' (EUR  32 billion) and a much larger deficit in 'energy' (222 billion). 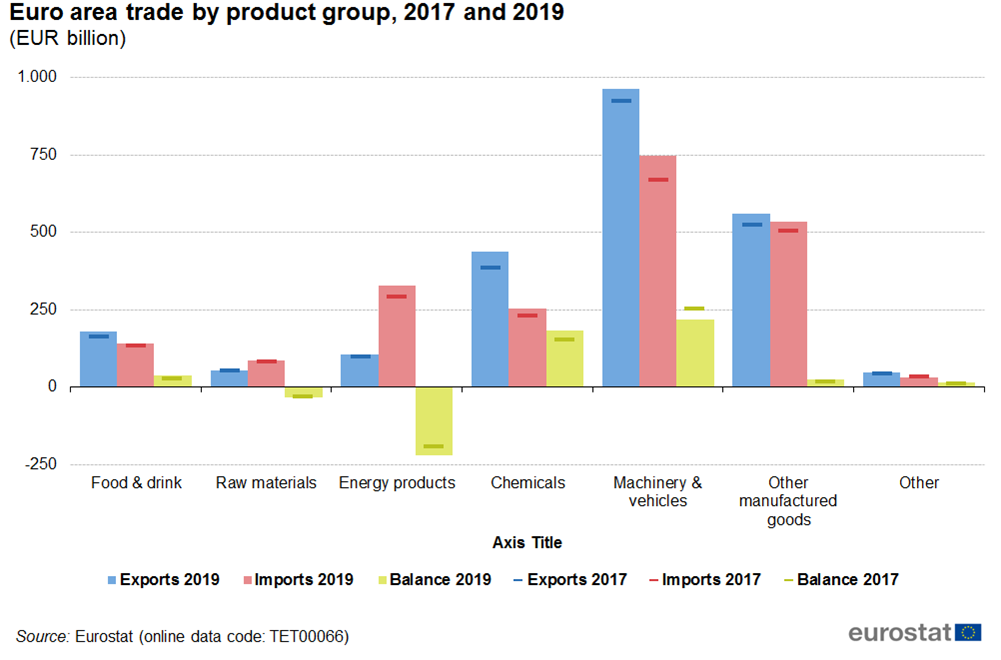 Euro area data come from Eurostat’s COMEXT database. COMEXT is the Eurostat reference database for international trade. It provides access not only to both recent and historical data from the EU Member States but also to statistics of a significant number of third countries. International trade aggregated and detailed statistics disseminated from Eurostat website are compiled from COMEXT data according to a monthly process. Because COMEXT is updated on a daily basis, data published on the website may differ from data stored in COMEXT in case of recent revisions.

Euro area data are compiled according to community guidelines and may, therefore, differ from national data published by Member States. Statistics on extra euro area trade are calculated as the sum of trade of each of the nineteen members with countries outside the euro area. In other words, the euro area is considered as a single trading entity and trade flows are measured into and out of the area, but not among euro are members.

Among the euro area partners in this article there are countries belonging to the EU in the years mentioned (Czechia, Hungary, Poland, Sweden and the United Kingdom) and partners outside the EU (United States, China, Switzerland, Russia and Turkey). The statistical concepts applicable to these two group of partners is different. Imports from non-EU trade partners are grouped by country of origin where imports from EU partners reflect the country of consignment. In practice this means that the goods imported from EU partners were physically transported from those countries, but part of these goods could have been of another origin. For this reason data on trade for these two groups are not fully comparable.

The euro area is a large and open trading bloc. This makes doing business in euro an attractive proposition for other trading nations, which can access a large market using one currency. Euro area companies also benefit because they can export and import in the global economy while paying, and being paid, in euro, reducing the risk of losses caused by global currency fluctuations.