This background article presents the degree of urbanisation typology for Local Administrative Units level 2 (LAU2). It describes the methodology developed in 2011 to classify LAU2s into thinly, intermediate and densely populated areas. These three types of area have been identified and defined using a criterion of geographical contiguity in combination with a minimum population threshold based on population grid square cells of 1 km2.

This methodology has been jointly developed by DG AGRI and DG REGIO of the European Commission with the support of the Joint Research Center (JRC) and Eurostat. The article also describes the original degree of urbanisation classification based on population size and density of LAU2s.

The Degree of urbanisation (DEGURBA) is a classification that indicates the character of an area. Based on the share of local population living in urban clusters and in urban centres, it classifies local administrative units level 2 (LAU2) into three types of area: thinly populated area (rural area); intermediate density area (towns and suburbs/small urban area), and densely populated area (cities/large urban area). 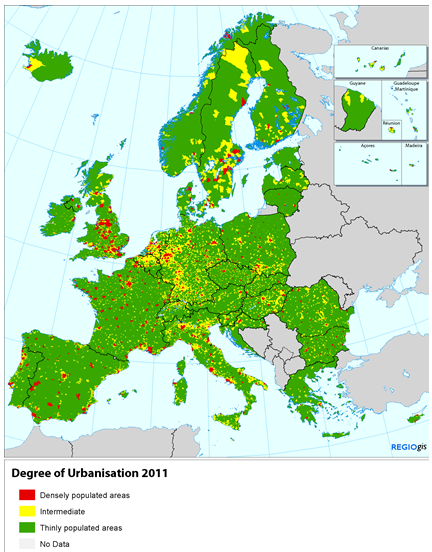 The classification of local administrative units (LAU2) in the mentioned areas uses as a criterion the geographical contiguity in combination with the share of local population living in the different type of clusters.

In a first step, the typology of clusters starts by classifing grid cells of 1 km2 to one of the three folowing clusters, according to their population size and density:

In a second step, local administrative units (LAU2) are then classified to one of three type of areas: 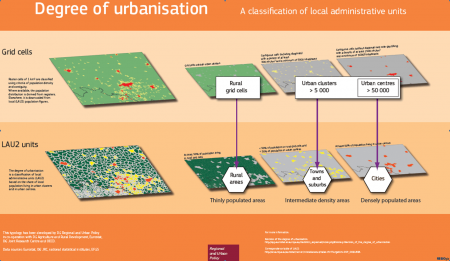 Revision of the degree of urbanisation

The original degree of urbanisation defined the three types of areas based on the population size and density and contiguity of local administrative units level 2 (LAU2). As LAU2s vary considerably in area size, the results were distorted, reducing the comparability between countries with large LAU2s and small LAU2s. For this reason, the classification of the degree of urbanisation has recently been revised and modified.

After the revision, the above-mentioned types of area have been identified and defined using a criterion of geographical contiguity in combination with a minimum population threshold based on population grid square cells of 1 km2. These grid cells all have the same shape and surface, which avoids distortions caused by using units varying in size.

The new methodology, that replaces the methodology used in the Labour Force Survey (LFS), has been agreed by the Directorates-General (DGs) for Regional and Urban Policy, Agriculture and Rural Development and Eurostat, and it is implemented from reference year 2012 onwards in all surveys concerned.

Advantages of the population grid approach

The two main advantages of the new methodology based on population grid cells are greater comparability and a harmonisation of spatial concepts.

The problem with the original degree of urbanisation is that it relied on the population size of LAU2s as one of the main criteria. If a LAU2 was large enough, even the presence of a large city would lead to it being classified as thinly populated.

This new approach also uses the criterion of population density but applied to units of analysis of the same size: 1km2 grid cells. As a result, it can look inside the large LAU2s and detect the presence of towns or cities within a LAU2. Therefore, the results are less distorted and more comparable between countries.

Prior to the new degree of urbanisation, four similar but not identical urban-rural spatial concepts were used: rural areas (according to the Organisation for Economic Co-operation and Development (OECD), thinly populated area, densely populated area, and Urban Audit City (see Figure 3). 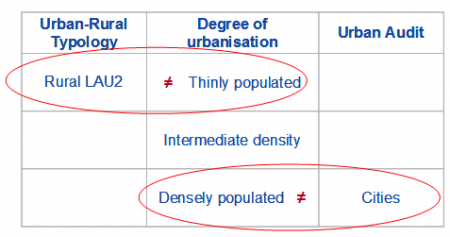 The OECD method classifies all LAU2 with a population density below 150 inhabitants per km2 as rural. This is different from the original degree of urbanisation method which also took into account population size and contiguity. This OECD method will also classify large LAU2s within a city as rural due to low population density. The Urban Audit covered a large sample of cities with at least 50 000 inhabitants. These cities were not selected in a harmonised manner and not all cities were included. The Urban Audit was not compatible with the densely populated areas identified by the original LFS method.

The new degree of urbanisation ensures that rural areas equal thinly populated areas. This also means that rural regions are identified using the same approach (share of population in rural grids). The high-density clusters were used to identify all cities with an urban centre with at least 50 000 inhabitants. As a result the Urban Audit now covers all those cities and the densely populated areas are identical to the Urban Audit cities (see Figure 4). 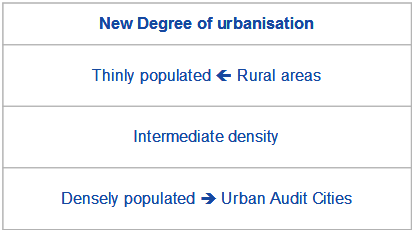 In order to classify properly LAU2s based on the grid cell approach described, a few additional correction rules must be provided:

As LAU2s vary considerably in area, this methodology will lead to a closer match between a high-density cluster and densely populated LAU2s in countries with small LAU2s than in those with large LAU2s.

To take this difference into account, the classification can be adjusted as following: