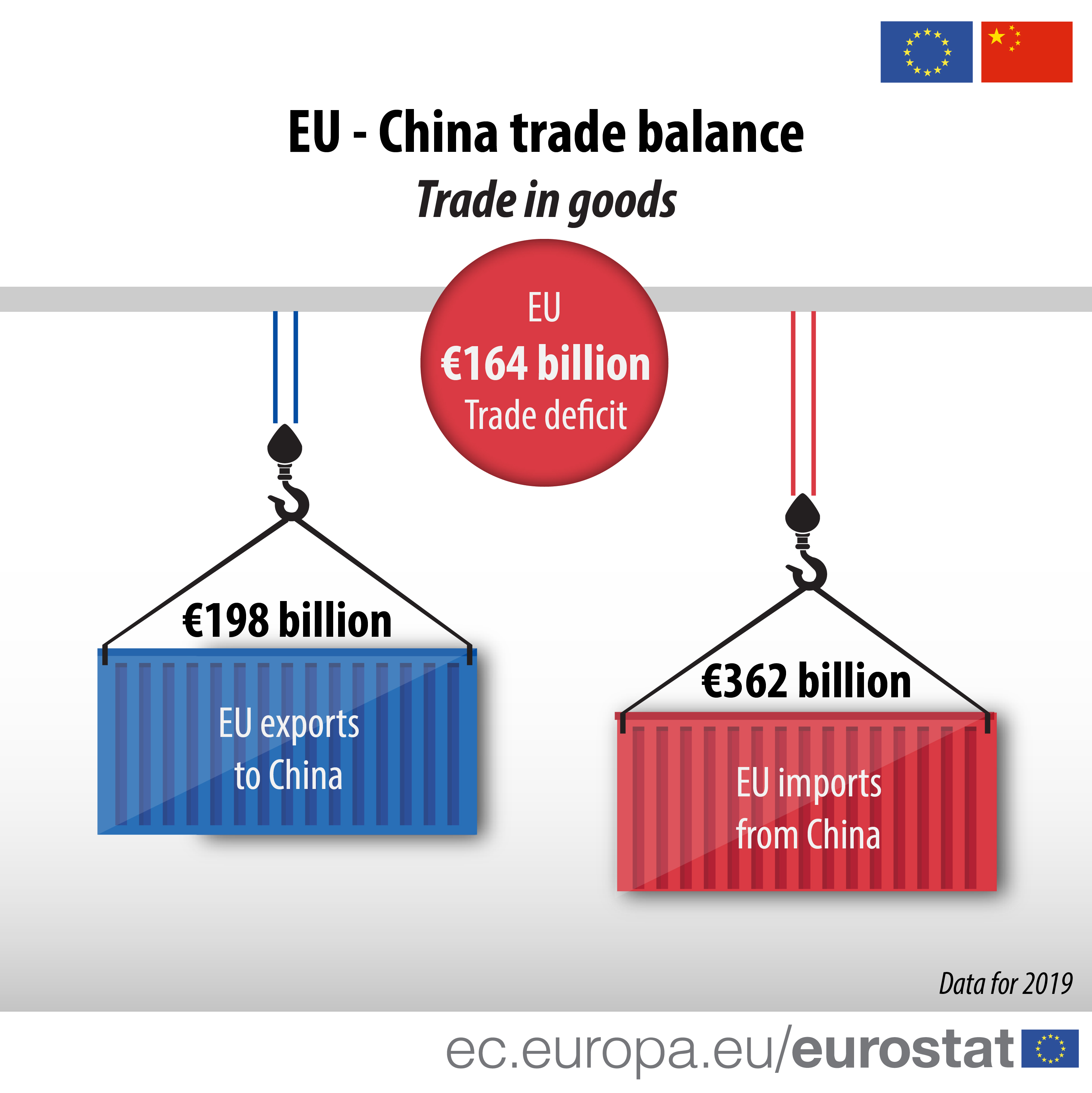 This article provides a picture of the international trade in goods between the European Union (EU) and China. It analyses the type of goods exchanged between the two economies and the shares of each EU Member State in those exchanges.

EU and China in world trade in goods 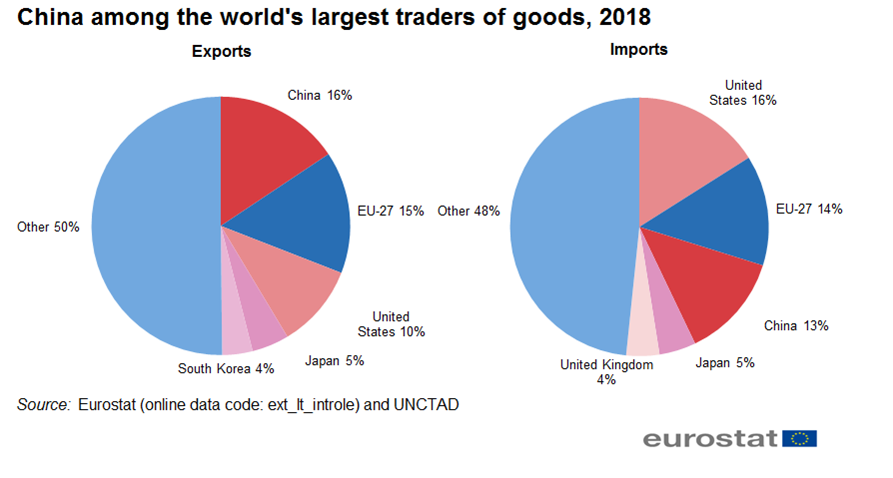 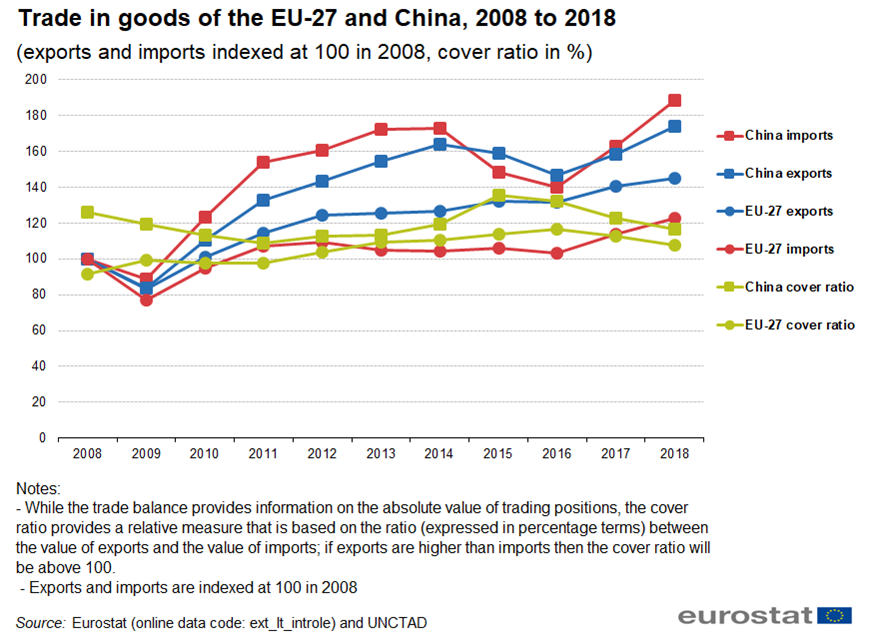 Both exports to and imports from China increased between 2009 and 2019. 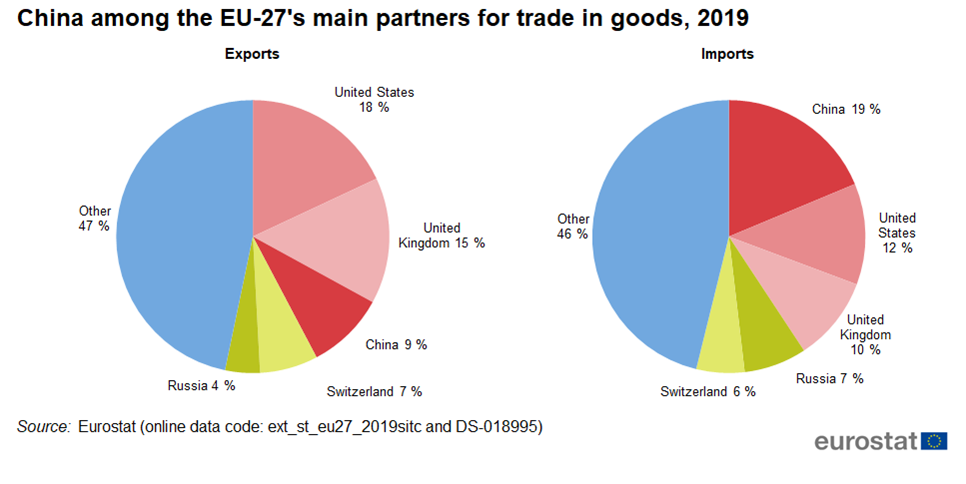 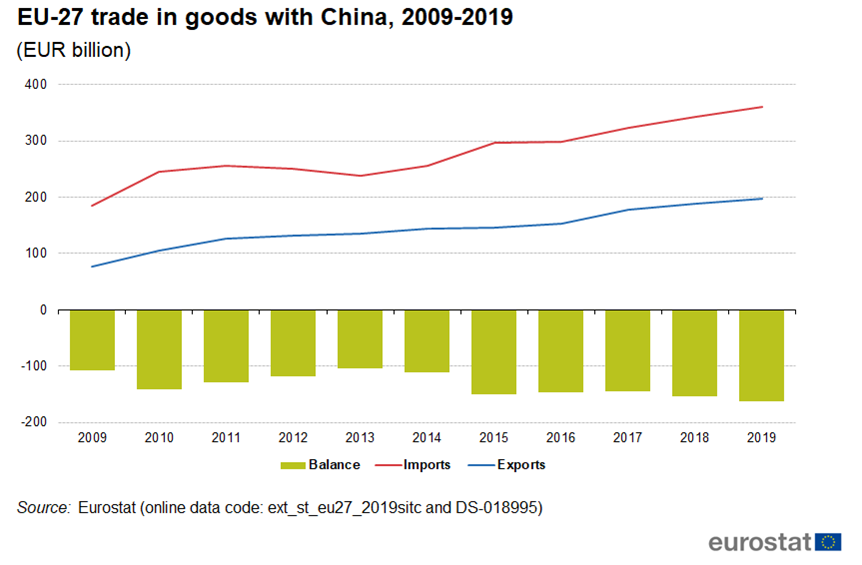 EU-China trade by type of goods 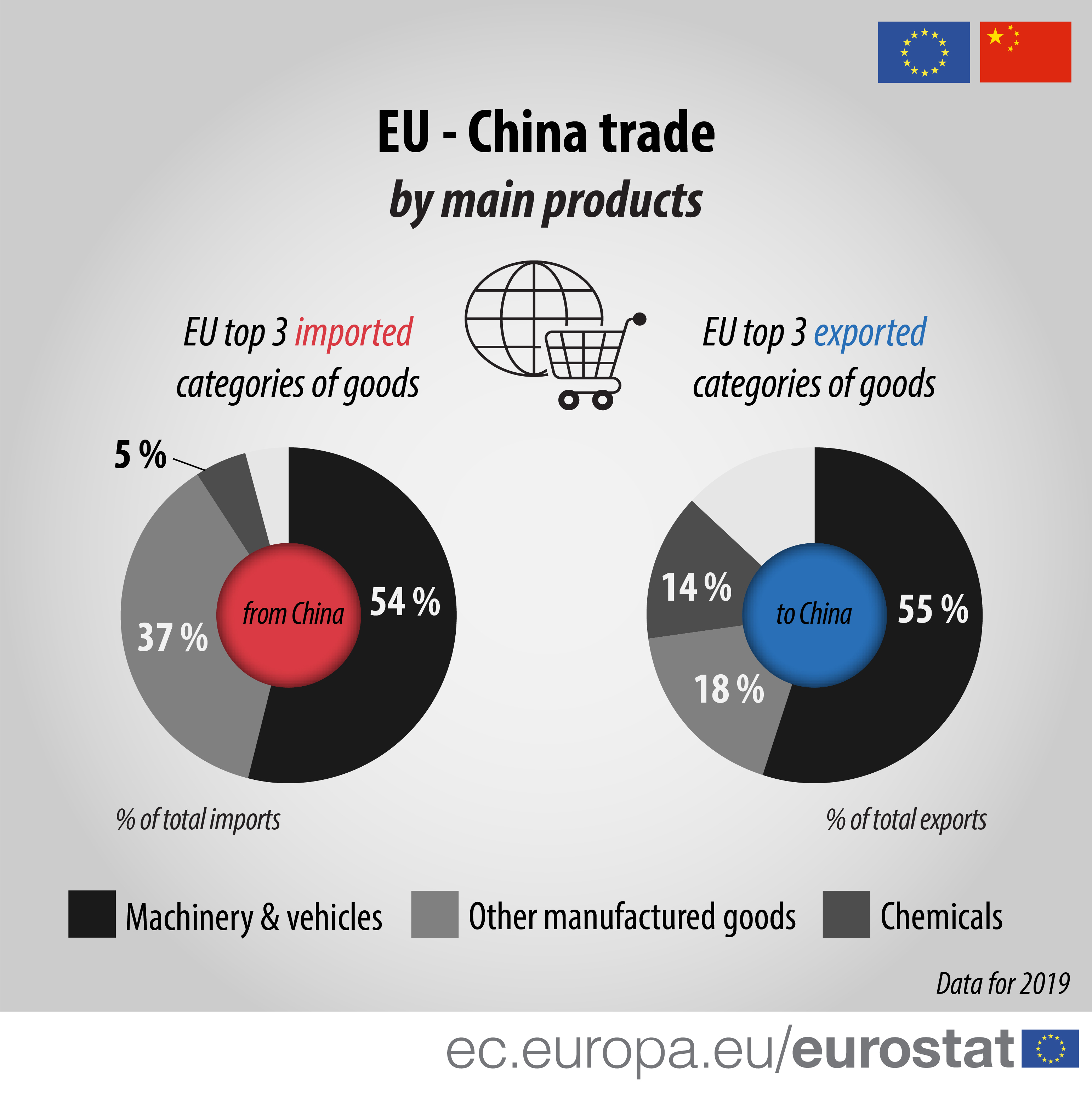 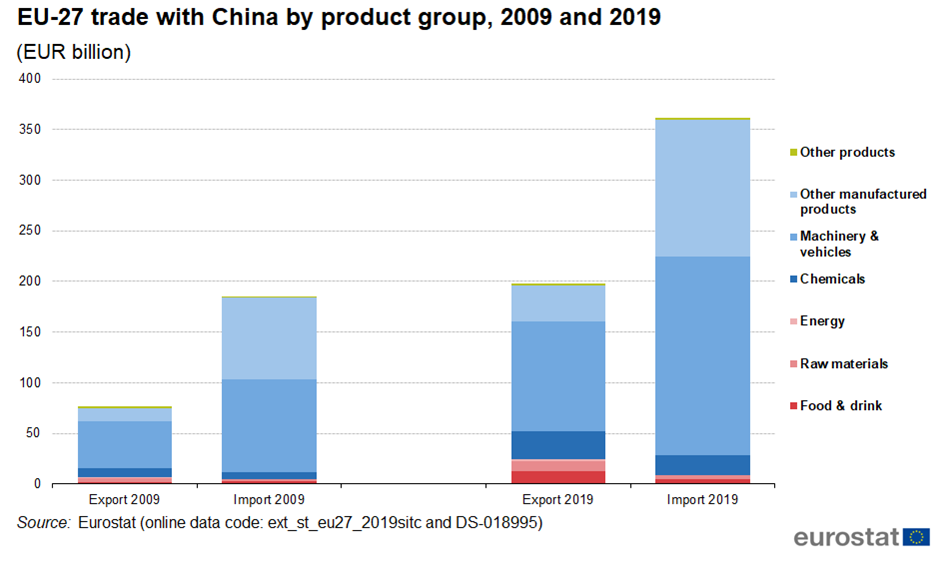 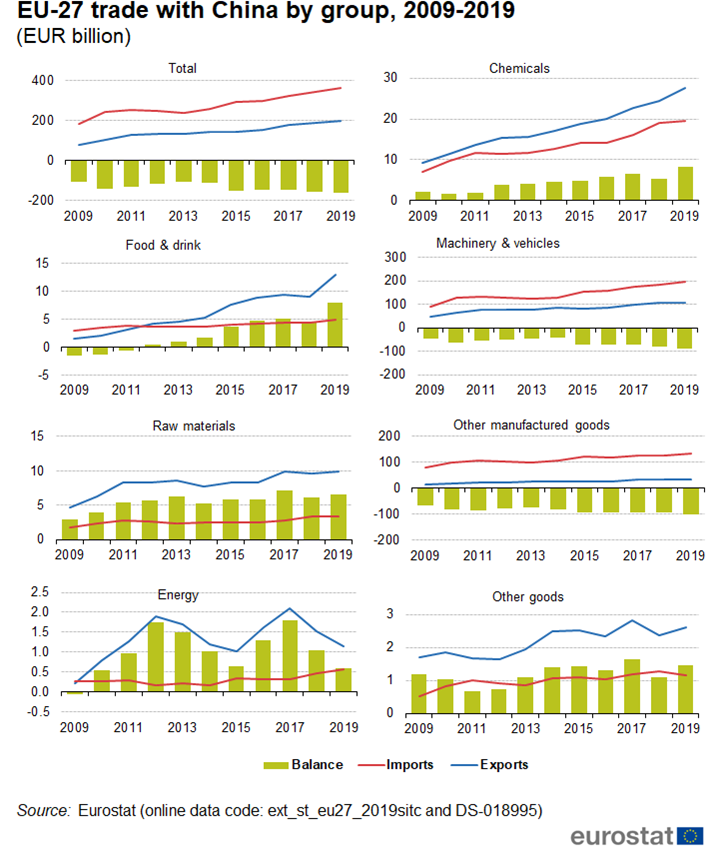 More detail about the goods exchanged between the EU and China is given in Figure 7, showing the 20 most traded goods at SITC-3 level. These top 20 goods covered 55 % of total trade in goods in 2019. Twelve belonged to machinery and vehicles, seven to other manufactured products and one to chemicals. The most traded product group at this level was telecommunications equipment. Another interesting way to look at the data is to investigate the cover ratio (exports / imports) of traded goods, showing the direction of the trade flows between the two economies. These ratios can be found in the right-hand margin of Figure 7. Eleven products were below 50 %, indicating EU imports from China were at least twice as large as EU exports to China. Five products were above 200 %, indicating EU exports to China were at least twice as large as EU imports from China. Four products were between 50 % and 200 %, showing more balanced trade. 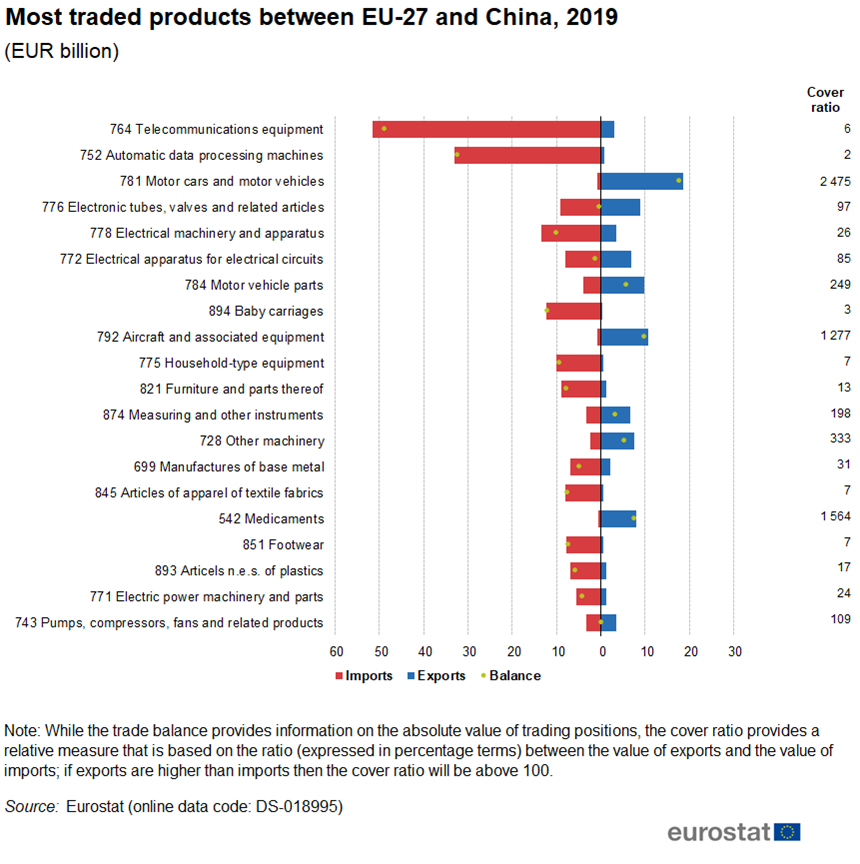 Trade with China by Member State

Table 1a shows the imports of goods from China by Member State. The three largest importers from China in the EU were the Netherlands (EUR 88 414 million), Germany (EUR 76 772 million) and Italy (EUR 31 665 million). Luxembourg (42.7 %) had the highest share for China in its extra-EU imports. 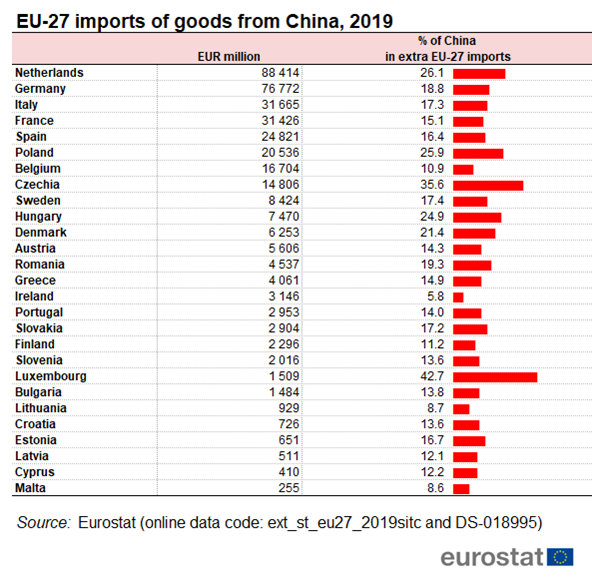 Table 1b shows the exports of goods to China by Member State. The three largest exporters to China in the EU were Germany (EUR 96 283 million), France (EUR 20 959 million) and the Netherlands (EUR 13 906 million). Germany (15.2 %) had the highest share for China in its extra-EU exports. 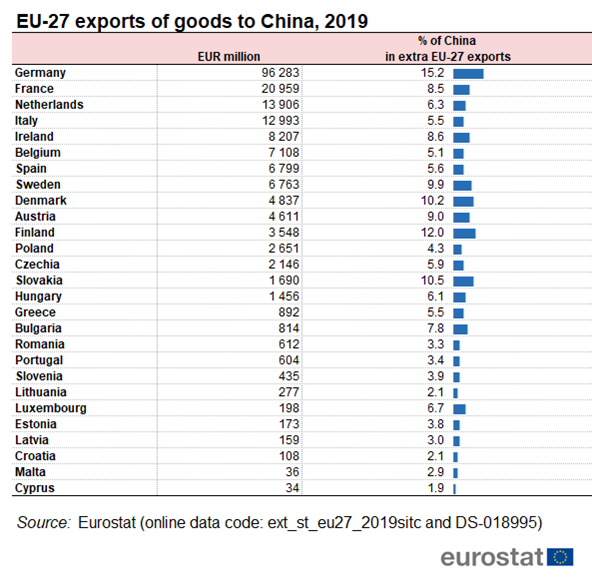 The trade in goods balance between the EU Member States and China is shown in Table 1c. It shows that three Member States had a trade surplus with China. The largest surplus was held by Germany (EUR 19 511 million), followed by Ireland (EUR 5 061 million) and Finland (EUR 1 252 million). There were 24 Member States that had a trade deficit with China. The largest deficit was held by the Netherlands (EUR 74 508 million), followed by Italy (EUR 18 673 million) and Spain (EUR 18 022 million). 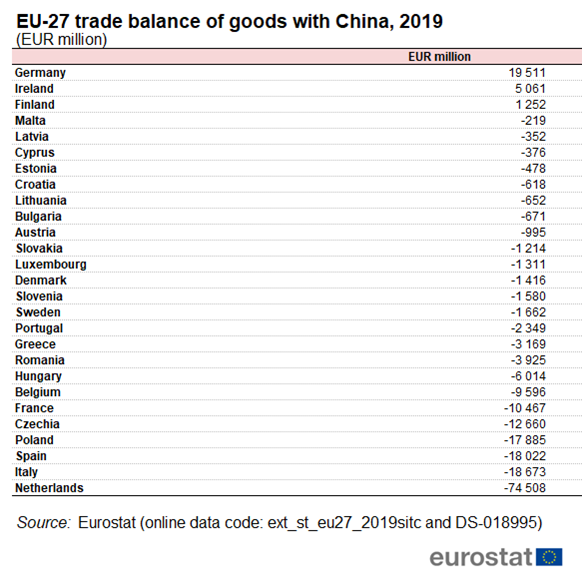