Here we will see how to compare GDP over time and between economies in ways that avoid drawing misleading conclusions because of: different sizes of population, inflation, and price level differences.

GDP gives us an idea about the size — in monetary terms — of an economy.

How can the GDP of countries of different sizes be compared?

One common comparison is between GDP and the number of people living in an economy, all men, women and children together (see article for more information on population statistics). Dividing the value of an economy’s GDP by its number of inhabitants gives us a ratio which is called GDP per inhabitant or GDP per capita.

In 2016, the population in the EU was 510 million. Dividing the huge GDP figure above by the population results in a GDP per inhabitant, or per capita, of EUR 29 000.


Now that’s a bit easier to understand, the number’s not so big, and we can think of it in comparison with how much someone earns in a job during a year for example.

How can GDP be analysed over time?

Another way to analyse GDP is to compare GDP in one year (or quarter) with GDP in another year (or quarter), in other words to see how it develops over time. We can do this by calculating a rate of change. This is often simply called a growth rate as GDP normally goes up, but as we see in times of recession or crisis, GDP can also decrease.


We can compare GDP in one year with the GDP of the year before, or even further back, for example 5, 10, 20 or more years ago. However, when we do this, we face the problem that GDP is measured in money terms (euros in the euro area and national currencies elsewhere within the EU) and the value of money changes over time, because of inflation (i.e. general price changes).


When we calculate GDP and compare the values between two or more years, we are comparing them using the prices of each of the years (2016 GDP in 2016 prices, 2015 GDP in 2015 prices and so on); this is called nominal GDP or GDP in current prices.


So if we have data for GDP in current prices for a series of years (a time series), in order to know how the economy has really changed we need to adjust for the price changes by using a price index. When we make this adjustment we are deflating the current price data and from the deflated data we can calculate the real rate of change (this is also refered to as the change in the volume of GDP). When we hear or read that GDP grew by a certain amount or a certain percentage, it is nearly always this real change (or volume change) that is being reported.

The EU’s GDP was 8.7 % higher in 2016 compared with 2006 (10 years earlier) in real terms, while over the same period GDP in current prices grew by 21.1 %. This means that less than half of the growth observed in current prices was due to real economic growth and the rest was simply due to inflation (rising prices).
See the explanation in Figure 1. 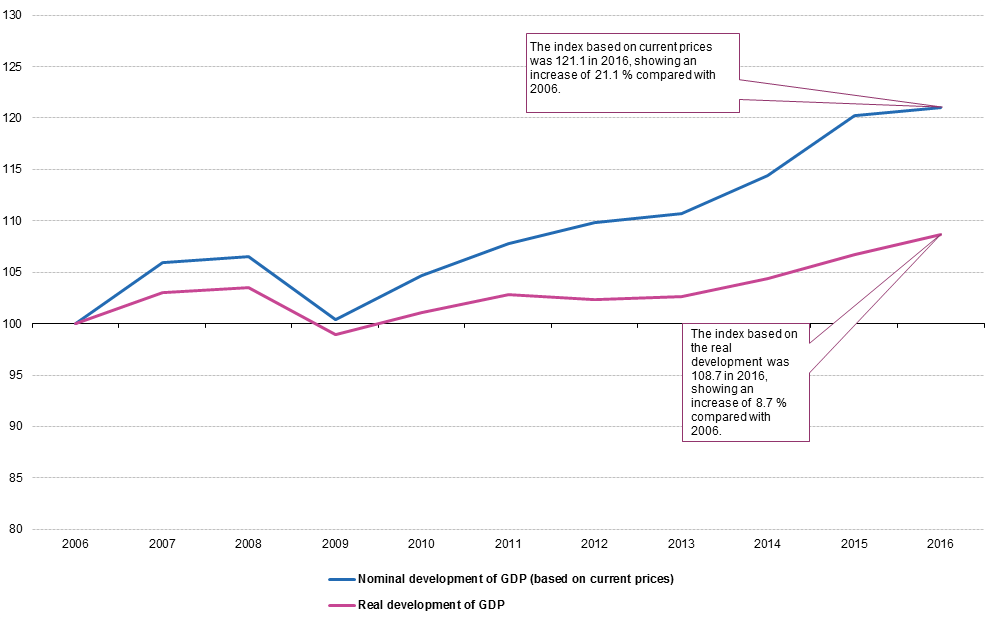 How can the GDP of different economies be compared?

How do we compare two economies, for example Germany and France, the two largest economies within the euro area, based on GDP?

When comparing across time (as shown earlier) we adjust for price changes in order to get the real rate of change and a similar situation arises for a comparison between economies where we need to adjust for price level differences.


In the same way that we used a price index to deflate GDP over time to get a real analysis of a time series, we can use a price level index to adjust GDP to help our comparison.


To adjust for price level differences between economies, the value of GDP in euros is converted using the purchasing power parity (PPP), a special exchange rate that takes price level differences into account. This conversion produces data that are no longer measured in euro, but in an artificial currency called a purchasing power standard (PPS) with which someone could, in theory, buy the same amount of goods and services in any economy.


However, because price levels are different in different economies, conversion to PPS leads to a GDP of PPS 3.0 trillion in Germany and of PPS 2.0 trillion in France; as can be seen, both of these numbers are smaller than the numbers given earlier in euro terms, because prices in Germany and France are, on average, higher than in the EU as a whole.


This means that you can buy less for your EUR 100 in these two Member States than in several other Member States which have lower price levels.

If we now divide these values by the population, we calculate GDP per inhabitant in PPS, which takes account not only of price level differences between economies, but also of differences in the size of their populations.

In 2016, GDP per inhabitant was PPS 35.8 thousand in Germany, around 18 % higher than the PPS 30.3 thousand in France — see Figure 2.
As such, adjusting GDP per capita for price level differences increased the gap in GDP per inhabitant between Germany and France in 2016 from 14 % in euro terms to 18 % in PPS terms; this reflects the fact that the average price level in France in 2016 was higher than that in Germany. 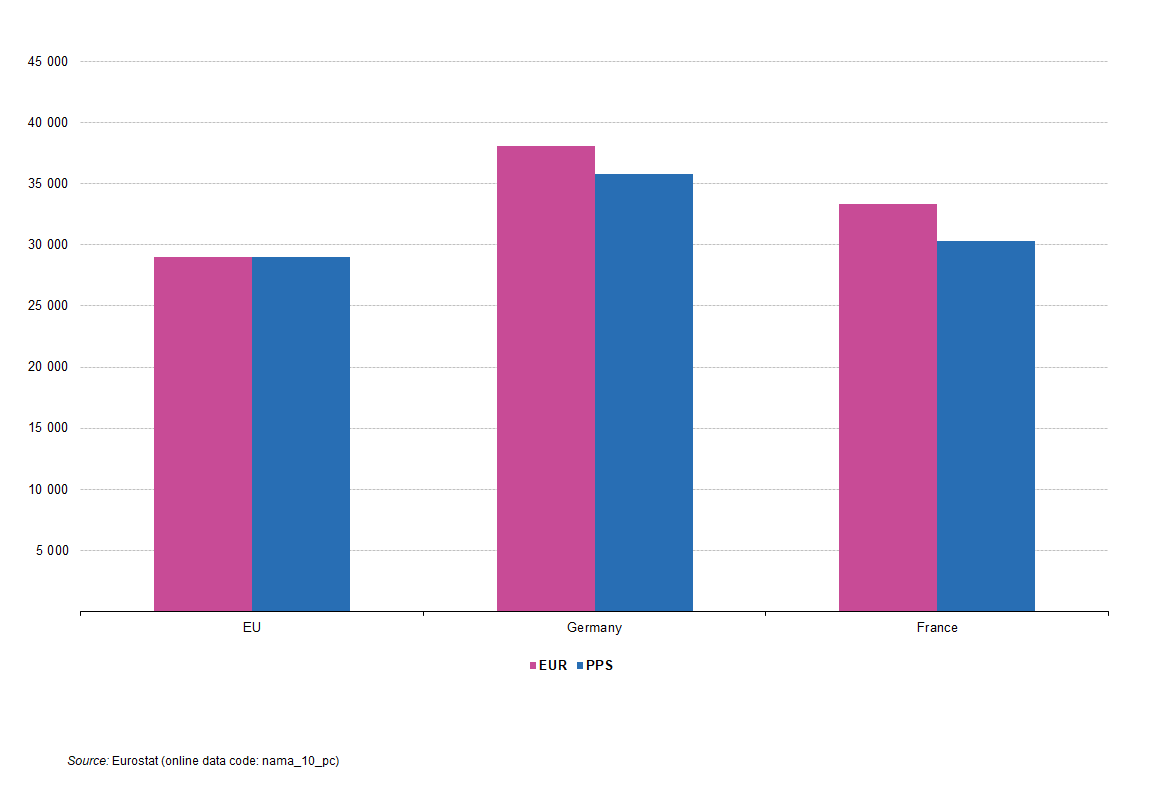