This Statistics Explained article is outdated and has been archived - for recent articles on Non-EU countries statistics see here. The countries of the ENP-South region are generally more ‘youthful’ than their counterparts in the European Union; in a majority of the ENP-South countries about one half of the population was under the age of 25 in 2011 compared to a little over one quarter (27.8 %) in the EU-28. Young people aged between 15 and 24 (the period that covers the transition from dependent childhood to independent adulthood) accounted for about one in every five persons in many of the ENP-South countries compared with about one in every eight in the European Union in 2011. 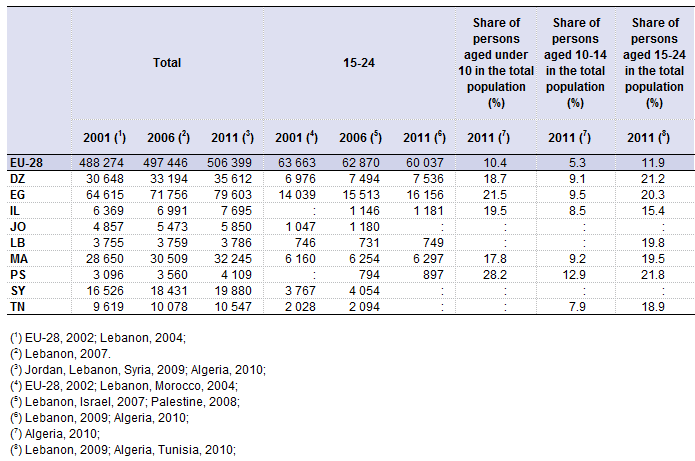 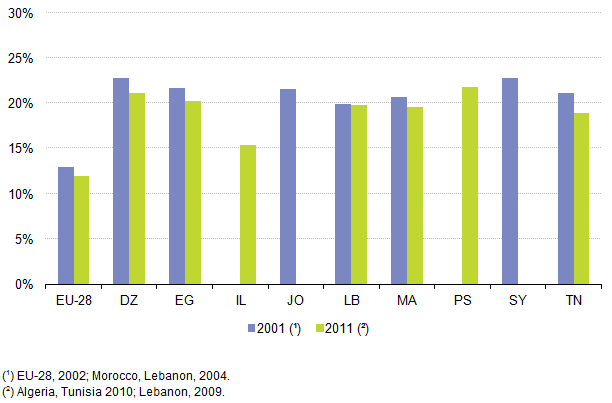 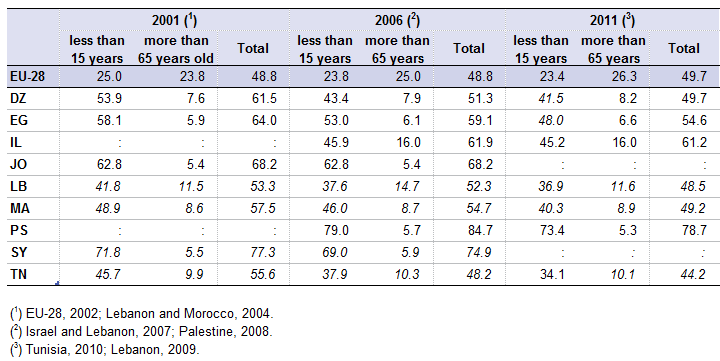 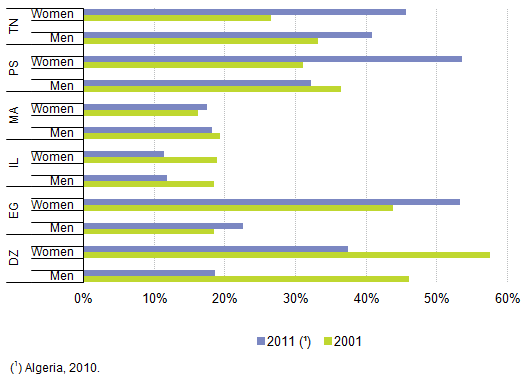 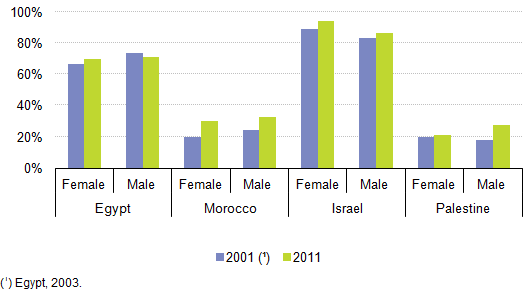 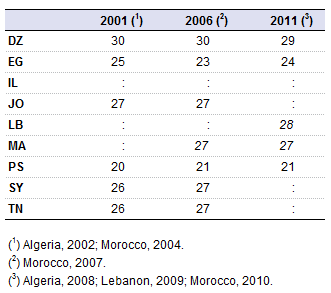 The Arab Spring movements at the end of 2010 highlighted wide dissatisfaction, including issues of limited employment perspectives for educated but disaffected young persons and unequal opportunities. Youth unemployment in many ENP-South countries is high; in 2011 it ranged between 30 % and 40 % in Egypt, Palestine and Tunisia.

Much larger youth populations in ENP-South than in the EU

There is no commonly agreed definition of ‘youth’, as there are differences in the length of compulsory education, legal voting age, etc. The analysis in this publication focuses on the population aged between 15 and 24.

A further 30 - 40 % of the populations of many ENP-South countries were under the age of 15, at least double the share (15.7 %) in the European Union in 2011, suggesting that the relative size of the youth populations of the two regions will continue to be different for the foreseeable future. Nevertheless, the share of the youth population in both ENP-South countries and the EU fell in the period between 2001 and 2011 (see Figure 1).

Age-related dependency ratios are a means of measuring the age structure of a population. They relate the number of individuals that are likely to be “dependent” on the support of others for their daily living – young persons and the elderly – to the number of those individuals who are capable of providing such support.

There are stark differences in the age-dependency ratios between the ENP-South countries and the EU, which have significant social policy implications. In the ENP-South countries, the young age dependency ratio (the population aged under 15 compared with the population aged 15 to 64) ranged from 34.1 % in Tunisia (2010) to 73.4 % in Palestine (2011), a much higher rate than that for the EU (23.4 % in 2011). Expressed in another way, the young age dependency ratio for Palestine in 2011 shows that for every 1 000 people of working age (15-64) there were 734 children under the age of 15. This suggests that issues of education, youth employment and the transition from school to work are of particular importance to the social policies of ENP-South countries.

In contrast, the EU is faced with challenges that come from a high old-age dependency ratio (26.3 % in 2011 and according to UN population projections estimated to rise to 50.4 % in 2050). Issues of healthcare, retirement ages and pensions for an ageing population are some of the key policy areas in the EU. By way of comparison, the old-age dependency ratios of ENP-South countries were typically between 5 % and 10 % in 2011, with the rates in Lebanon and Israel (16.0 %) being a little higher. Still, according to the UN’s World Population prospects [1] , the old-age dependency ratios of all ENP-South countries are also expected to rise sharply through to 2050.

Nevertheless, in a couple of the ENP-South countries there appeared to be a strong downward trend in youth unemployment. In particular, there were strong declines in Algeria (in the period between 2003 and 2010). The reasons for this decline appear to be a combination of youth unemployment reduction programmes, efforts to facilitate entrepreneurship with easier access to credit and the rapid demographic transition of the country, the latter driven by a fertility decline that may be explained by rising ages at marriage[3].

Only in the cases of Morocco and Israel did unemployment rates for young women remain quite similar to those of young men.

The net economic activity rate of the population aged 15-24 is the share of the total population engaged in the labour force (included those that are registered as unemployed). Hence, it does not take into account those still in education (or doing compulsory military service). A low net economic activity rate in this age group points to relatively higher proportions of young people remaining in education.

In Morocco, where youth unemployment was relatively low and stable compared with most other ENP-South countries, there was a downward trend in the net economic activity rate (from 42% in 2001 to 35% in 2011), suggesting that higher proportions of young adults were staying in education (through to upper secondary and tertiary education).

A number of ENP-South countries face a lack of qualified jobs and the highest unemployment rates are often found among the most-educated[4]. Therefore, young people might be put off from higher education due to meagre employment perspectives for the highly qualified. This scenario may help to explain the upward trends in the net economic activity rates of Palestine and Egypt during the period between 2001 and 2011.

With the notable exception of Israel, the net economic activity rates of young women in the other ENP-South countries were much lower than for young men (see Figure 6). The difference between the genders was about 24 percentage points in Lebanon (2009), a little over 32 percentage points in Algeria (2010), Egypt and Palestine, and closer to 36 percentage points in Morocco in 2011. These differences may partially be explained by women’s “empowerment deficit”[5], denoting an insufficient participation in economic and political life, and a lack of access to knowledge and education. The situation in Palestine may be considered as a particular one: the gender difference in educational attainment does not explain the high gap, but rather a situation characterised by instability, mobility restrictions, unemployment and poverty. Marriage at a relatively young age (see below) may be part of the coping and defence mechanisms to deal with those realities[6].

In most ENP-South countries for which data are available, the average age of first marriage for women (for the latest reference year available) ranged from 24 in Egypt (2011) to 29 in Algeria (2008). Only Palestine reported an early average marriage age, at 21. This may be influenced by poor labour market perspectives and other social and economic reasons[8].

The data for the ENP are supplied by and under the responsibility of the national statistical authorities (NSIs) of each of the countries or territories on a voluntary basis. Data from other sources are very limited and clearly identified. The data for Algeria, Egypt, Israel, Jordan, Lebanon, Morocco, Palestine territory, Syria and Tunisia are collected by Eurostat directly from the relevant NSIs. The statistics that are included in this article are freely available on-line and form part of the Pocketbook on Euro-Mediterranean statistics - 2013 edition.

This article presents selected statistics and analyses on the situation of young adults under the age of 25 for nine Mediterranean countries covered by the European Neighbourhood Policy (ENP-South countries). It provides an overview of demographic trends, the labour market situation and education in Algeria (DZ), Egypt (EG), Israel (IL), Jordan (JO), Lebanon (LB), Morocco (MA), Palestine (PS), Syria (SY) and Tunisia (TN). The Arab Spring movements at the end of 2010 highlighted wide dissatisfaction, including issues of limited employment perspectives for educated but disaffected young persons and unequal opportunities. The policy context of the European Neighbourhood Policy (ENP) is explained in International statistical cooperation.