In which EU regions are women achieving the most, and in which ones they face the largest disadvantage? The EU regional gender equality monitor is the first to capture aspects of gender equality at the regional level for the almost totality of EU NUTS2 regions.

What city is the cleanest or the safest? In which city is easy to find a job or a house? Which city has the best public transport or air quality? The report on the Quality of life in European Cities 2020 summarises the results of the 5th survey, carried out in 2019, of 83 European cities.

The 2008 economic crisis had a deep impact on economic and social cohesion in the EU and the surge in disparities is now frequently cited as one of the main causes for the current lack of popular support for the project of constructing the European Union.

Good urban public transport can reduce congestion, air pollution and greenhouse gas emissions. It can improve a city’s quality of life and strengthen its economy. This map measures access to public transport for many European cities using the United Nations Sustainable Development Goal indicator. The map is accompanied by city fact sheets which report its various indicators and benchmark them to other cities.

The European system of urban/rural territorial classifications relies upon basic types of 1 km² grid cell clusters. By definition, these clusters are independent from any existing administrative unit. This is an important asset as it avoids distortions due to historical, administrative and/or political factors. Nevertheless, when analysing indicators at the level of individual grid-based clusters it is very useful to be able to attribute a name to the clusters. High-density clusters (or urban centres) represent the major cities, each with a population of at least 50,000 inhabitants. There are more than 800 urban centres in Europe. Most of these can be associated with a particular local administrative unit. This means that it has been quite straightforward to allocate a name to each of the grid-based urban centres.
The class of urban clusters (moderate-density clusters) contains suburbs and towns. While suburbs can be associated to urban centres, grid-based towns do not have any a-priori name. Still, providing names to these units can be useful to facilitate referencing them. Hence, the challenge is to provide (unique) names for more than 9000 towns throughout Europe.

In the Commission's Eighth Report for Economic, Social and Territorial Cohesion a serie of maps shows how European regions compare in a wide range of areas: the economy, social development, the environment, transport, health, education, research and development. 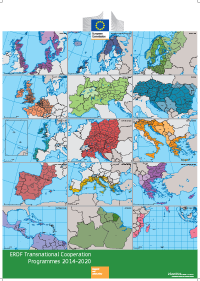 Regions eligible under the convergence and regional competitiveness objectives
English
(16, 9 MB - ZIP)
Download
Cross-border cooperation
This map shows the areas of the cross-border programmes co-financed by the ERDF. Each programme area is shown with a specific colour. Hatched areas are part of two or more programme areas simultaneously.
Source: DG REGIO 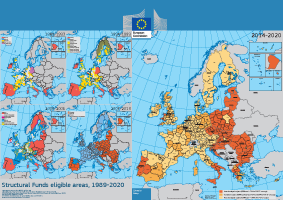 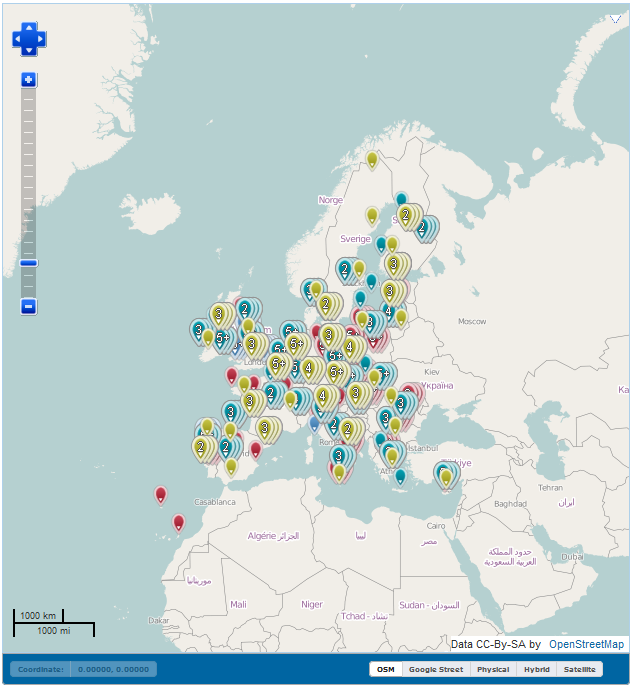