By involving local residents from the very beginning, an urban revitalisation project in Gdansk has been able to focus on real needs and ensure that concrete achievements will be carried on and sustained by engaged citizens. 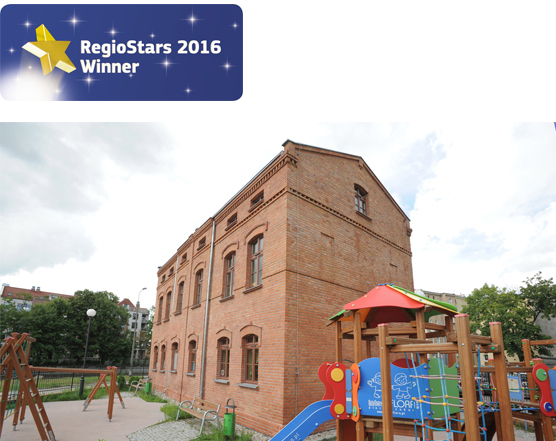 A reconstructed historical building has been transformed to a day nursery, part of the revitalisation of the Lower Town District in Gdańsk project. RegioStars 2016 ©Associated Press

" The revitalisation of the Lower Town district of Gdansk was made possible through the creation of a broad coalition of social partners such as local communities, artists, NGOs and businesses in order to fight social segregation. Indeed, one of the most significant results has been the interest shown by residents to get involved in these new opportunities. "

Gdansk’s Lower Town has historically been one of the most neglected districts of the city, with little investments or renovation taking place. In order to address this, a project has been carried out to revitalise historic parts of Gdansk with the aim of both attracting sustainable long-term investment and encouraging greater social inclusion.

The project, which received EUR 5 792 000 from the European Regional Development Fund, involved regenerating existing buildings and infrastructure and creating new social opportunities. For example, one historic building in the centre has been converted into a centre for contemporary art, while an abandoned building has become a student centre. This focus on providing social amenities has also led to the development of a children's day room facility for primary school pupils and a facility for senior citizens. Around 10 000 residents have participated in social inclusion programmes or other activities and the children’s day room has created five new jobs.

An interesting aspect of the project has been the fact that residents have been involved in the plans from the beginning. Locals were asked about their needs and expectations, and their responses were taken into consideration during final drafting of the proposals. It is hoped that the communities involved in revitalising the lower town district of Gdansk will now play a positive role strengthening the neighbourhood’s cultural and economic vibrancy.

For example, the new Laznia Centre for Contemporary Art has intensified its cultural work, involving local NGOs and social welfare organisations in order to encourage residents to get involved in the life of the area. Many artistic education programmes are aimed at socially marginalised people, including adolescent mothers, to ensure that they enjoy equal access to culture.

This approach of listening and adapting to the needs of local residents is something that can be transferred to other cities and regions, regardless of their size and economic potential.

In order to attract investment and businesses, infrastructure such as street surfaces and public spaces have been repaired and revitalised, and an incubator for creative industries created. A former hospital building has been sold and will be turned into a hotel.

Further plans aim to carry on the good work. At the former tram depot, there are plans to build a modern sports and recreation complex, which will help to bring investment and tourism to this part of the city.

Total investment for the project “Revitalization of Lower Town District in Gdansk” is EUR 8 274 000, with the EU’s European Regional Development Fund contributing EUR 5 792 000 through the “Pomorskie” Operational Programme for the 2007-2013 programming period.

Pomorskie View programmes for this region