An EU-funded project has carried out renovations on the Primitive Way of St. James in the autonomous community of Galicia, in north-western Spain. The Primitive Way was the pilgrimage route to Santiago de Compostela that people from Asturias and Galicia used during the 9th century and a good part of the 10th. It attracted pilgrims from other parts of northern Spain and Europe. 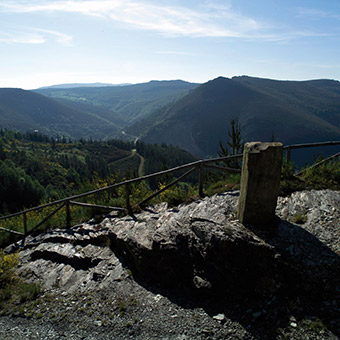 Viewing point on the Primitive Way at A Fonsagrada, Spain ©Turismo de Galicia

" This project has mainly contributed to the sustainable recovery of the oldest pilgrim route. It has revitalised and promoted the route, its infrastructure and its immaterial heritage. It has also contributed to rural settlements and to the economic growth of the local areas. Since the total number of pilgrims and tourists walking the Way of St. James is increasing, this project helped reduce tourism pressure on the main way: the French Way. "

Work under the project was divided into three parts. Firstly, improvements were made to the condition of the pathways. The surfaces were made safer and water drainage channels were built.

Secondly, signage was put up. This comprised more than 500 waymarks, including cairns (mounds of stones) and yellow arrows, and some 100 ceramic and 15 bronze shells – the scallop shell being the main symbol of the Way of St. James. Finally, Casa Pasarín, an important example of architectural heritage in the village of A Fonsagrada, was restored for use as a pilgrim hostel.

A network of historical routes

The Way of St. James (Camino de Santiago) is composed of a network of historical routes leading to the shrine of the apostle St. James the Greater in the Cathedral of Santiago de Compostela, capital of Galicia. Tradition has it that this is where his remains are buried. Along with the Primitive Way, the routes include the French Way, the Fisterra and Muxía Way, the Silver Way, the English Way, the Northern Way, the Route of the Sea of Arousa and River Ulla, the Winter Way, the Portuguese Way and the Portuguese Way of the Coast.

Named as a UNESCO World Heritage Site with the Northern Way in 2015, the Primitive Way is the oldest of the routes. Alfonso II, king of Asturias from 791 to 842, used it to travel to Santiago de Compostela from his capital at Oviedo in the early 9th century to confirm that remains discovered there were really those of St. James.

In subsequent centuries, following the move of the capital of Asturias to León, the French Way – which as its name suggests links Santiago with France – surpassed the Primitive Way in importance. Designated as a UNESCO World Heritage Site in 1993, it remains the most widely recognised route internationally.

Taken by more than 13 000 pilgrims a year, the Primitive Way mainly follows the path of ancient Roman roads. Just over 160 km of it – around half its total length – is situated within Galicia. The upgrades carried out under the project and the resulting enhanced provision of services for pilgrims should serve to promote the route and the examples of cultural heritage lying along it. Prominent among these is the city of Lugo, with its Roman walls and Romanesque cathedral.

Restoration of Casa Pasarín is a key element in this. Previously in a semi-abandoned state, it now houses the Ramón Rodríguez Mondelo hostel, which provides services and facilities in line with the tourism accessibility plan for Galicia and the Camino de Santiago. The plan promotes a set of initiatives for the coming years to ensure that anyone, regardless of age or physical limitations, can enjoy the experience.

Total investment for the project “Renovation and promotion of the Primitive Way” is EUR 2 868 713, with the EU’s European Regional Development Fund contributing EUR 2 244 319 through the “Galicia” Operational Programme for the 2014-2020 programming period.

Galicia View programmes for this region