Municipalities and businesses in the southern Sweden-Norway border area are changing their fossil-fuel powered vehicles for cleaner, greener alternatives thanks to the Entire Green Road project. The Fyrbodal association of local authorities have come together in this initiative, through which diesel and petrol vehicles are successively replaced with those powered by electricity, biogas or hydrogen. The project has been instrumental in expanding charging and refuelling infrastructure. 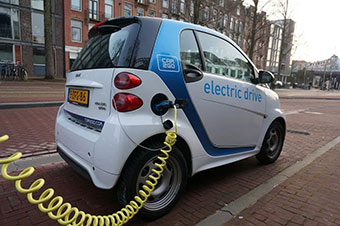 The Entire Green Road project has encouraged municipalities and businesses in the Sweden-Norway border area to use cleaner transport. ©Creative Commons

" The fact that more people choose the bike rather than the car is a good climate measure. The Entire Green Road has made it possible for more people to test-drive electric bicycles. For example, some libraries in Norway now offer loans for electric bicycles through a loan-card scheme. "

The project built on strong political foundations as the border region’s 39 municipalities have signed up to running fossil-free vehicle fleets by no later than 2030. As well as buying new, greener models, some municipalities are choosing fossil-free alternatives when procuring transport services from the private sector, which in turn is encouraging these suppliers to go green.

Entire Green Road has helped capacity-building in the municipal sector. The move towards green transport solutions is progressing well: for example in the 14 municipalities that make up the Fyrbodal association, almost one-third of the vehicles are already fossil-free, with more on the way.

To complement the switch, a network of electric charging points is being rapidly expanded. Several industrial players are establishing themselves and investing heavily to meet the new demand. The border region now has more than 1 300 charging points available for public use, and five biogas stations. Fifteen biogas kegs are accessible in 12 of the border region’s municipalities.

The local business community is investing in fossil-free company cars and work vehicles, and providing charging points for their customers and staff. Through Entire Green Road, people have been able to test drive electric and biogas-powered cars and electric bikes. Around 1 000 test runs were carried out during the project’s lifetime.

Also through the project, people have been able to borrow electric bikes from local libraries. At least 500 people took part in the scheme, borrowing a bike for one week at a time. In another initiative to encourage change, a range of fossil-free heavy work vehicles such as excavators, wheel loaders and light trucks were lent to 60 Norwegian companies and municipalities.

Awareness-raising activities were central to the project, which reached large numbers of local people through social media and the publication of articles in local, regional and national newspapers. Thanks to this project’s efforts, more people and organisations in the cross-border region are choosing fossil-free transport solutions. In total, there are estimated to be around 16 000 electric or biogas powered vehicles on local roads.

A new project called Fossil Free Border Region began in January 2019, which will build on the foundations laid by Entire Green Road.

Total investment for the project “The Entire Green Road - Fossil-independent border region 2030” is EUR 1 702 000, with the EU’s European Regional Development Fund contributing EUR 348 500 through the “Interreg V-A Sweden-Norway” Operational Programme for the 2014-2020 programming period. The investment falls under the priority “Low-carbon economy”.

The Fyrbodal association of local authorities