The BLASTIC project monitored and mapped sources and pathways of marine litter in four areas – Turku in Finland, Södertälje in Sweden, Tallinn in Estonia and Liepaja in Latvia – to demonstrate how plastic waste finds its way from urban areas into the Baltic Sea. Less marine plastic litter means less leakage of hazardous substances and toxins into the aquatic environment. 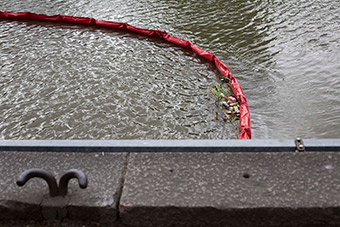 " Being part of the project has been beneficial for the municipality. We got feedback on how we work and think about our preventive work against littering. For the participants, there were opportunities for competence development where they had the chance to meet and discuss marine littering with different people with different backgrounds and experiences. "

BLASTIC drew up a checklist for mapping sources, flows and pathways of marine litter and formulated a methodology for monitoring its distribution in rivers and coastal waters in and around the Baltic. Mapping and monitoring exercises were carried out in 42 municipalities in the four participating countries, using the tools developed under the project, to compile guidelines and identify sources and pathways to be prioritised.

The exercises led to the development of local marine litter prevention and reduction plans in pilot areas, with a focus on plastic waste from cities.

Litter is one of the most widespread environmental pressures on marine environments, receiving increasing publicity and causing great concern. Marine litter in the central Baltic mainly consists of plastic and packaging. Land-based sources produce most of this waste, and rivers are its main routes into the sea.

An important part of BLASTIC’s efforts to tackle the problem was the adaptation of regional and national strategies for use at local level. The project worked towards the goal set by the Regional Action Plan on Marine Litter of the Baltic Marine Environment Protection Commission of achieving significant reductions in marine litter by 2025.

It contributed to work under the European Strategy for Plastics in a Circular Economy, which addresses issues including recycling, biodegradability and hazardous substances in litter. In line with this, recommendations arising from the project took account of the need to improve resource efficiency in the waste and water sectors.

Lifestyles characterised by a throw-away mentality are thought to be among the main factors behind the accumulation of marine litter. For instance, many people do not know that stormwater flows into waterways – and hence the sea – untreated, or that rubbish flushed down the toilet can reach the ocean. Communication that shows people how litter ends up in the sea and how human negligence allows this to happen is thus important in addressing the issue.

BLASTIC was a flagship project under the ‘hazards’ policy area of the EU Strategy for the Baltic Sea Region, one of the main objectives of which is to save the sea by ensuring clear water and rich and healthy wildlife. This status was helpful in communicating the project to politicians and decision-makers.

BLASTIC’s communication work increased awareness of the environmental hazards caused by plastic marine litter and provided decision-makers and the wider public with the latest facts on litter in the Baltic Sea, highlighting that it is as much of a problem there as in the rest of the world’s oceans.

These efforts were backed up with a knowledge bank containing information on the impact of litter on marine life and its economic cost, and a case study on the socioeconomic effects of marine plastics.

In addition, the BLASTIC concept was promoted in other geographical areas to support its adaptation to their needs. This should facilitate continuation and expansion of the work to further reduce flows of hazardous substances into the Baltic.

Total investment for the project “BLASTIC – plastic waste pathways into the Baltic Sea” is EUR 1 016 555, with the EU’s European Regional Development Fund contributing EUR 784 522 through the “Interreg V-A - Finland-Estonia-Latvia-Sweden (Central Baltic)” Operational Programme for the 2014-2020 programming period. The investment falls under the priority “Environment and resource efficiency”.