The FCE underground railway in the city of Catania in Sicily, Italy, is being expanded to Fontanarossa airport. The project will connect the underground rail network with bus feeder lines and mobility on-demand technology platforms to create a more integrated public transport system. 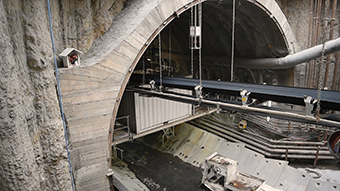 The 6.8 km tunnel will link the Piazza Stesicoro and Fontanarossa airport in Catania, Sicily. ©Luca Savettiere

" This new underground line will perform the important function of connecting urban and suburban areas, integrating new transport routes into the existing network. As soon as this underground section is completed, the existing line from the city centre will offer a new way for people and tourists within an area of 100-150 km to directly reach the airport. The creation of dedicated services on the Milazzo - Messina - Taormina - Catania and Siracusa-Catania line could create alternative access routes to tourist sites from the Aeolian Islands to Val di Noto. "

The project will see the construction of a 6.8 km tunnel from the Piazza Stesicoro to the Fontanarossa airport, connecting the city centre directly with the airport. An average of five metres a day are being dug using a tunnel-boring machine. It will take an estimated four-and-a-half years to build, with an expected delivery date in 2023.

This project will include building six stations, and electrified double track and an ordinary gauge railway line. Seventeen sets of locomotives and carriages will be bought. Each will be 39 m long and will have a maximum speed of 120 km/h. The expansion will increase the availability of public transport, which will have a positive impact on the environment, will improve citizens’ safety and health and support a better quality of life.

Catania is the second-largest city in Sicily, and has the highest rate of urban motorisation and car traffic. This means the city battles with congestion, pollution and overcrowded public spaces. The city ranks among the worst in Italy regarding urban sustainability.

The project aims to ease congestion and improve accessibility to public transport by enhancing connectivity between the urban transport network and Fontanarossa airport, which has the highest air traffic rate in southern Italy. University students will have better access to transport, as 70 % of the city’s university districts will be within 500 m from each station. The line will have a positive impact on tourism, as it will allow visitors direct access to the airport.

The tunnel is the main component in several different construction projects which aims to relieve congestion on the city’s main railway ring. The underground line currently has a length of 8.8 km and includes 10 west-to-east stations, from Nesima to Stesicoro in the city’s historical centre.

By the end of 2025 a westbound 3.9 km section from Nesima to Misterbianco will be built, bringing the total length of the railway line to almost 20 km with 22 stations. This will allow for 9 000 passengers to travel in each direction every hour, or 40 million to 60 million passengers per year.

The previous construction of new routes from Stesicoro to Nesima had a positive impact on mobility. The opening of this route in 2017 increased passenger numbers from 600 000 to 3.6 million a year. By the end of 2018, this had increased to over 5 million.

The project will create 250 new temporary jobs in the first four years of construction. A total of 200 permanent jobs will be needed to keep the railway line operating.

Total investment for the project “FCE (CER) - Circumetnea Railway Catania” is EUR 551 500 000, with the EU’s European Regional Development Fund contributing EUR 358 685 547 through the “ERDF Sicily 2014/2020” Operational Programme for the 2014-2020 programming period. The investment falls under the priority “Developing transport and network infrastructures”.

Sicilia View programmes for this region