Basilica of St. Benedict in Norcia, Italy to be rebuilt following earthquake damage

Largely destroyed in the earthquake of 30 October 2016, the Basilica of St. Benedict in Norcia, in the central Italian region of Umbria, is being rebuilt under an EU-funded project. An international competition has been launched to select a design which will restore the building to its former glory and its central historical, cultural and social role in the community. 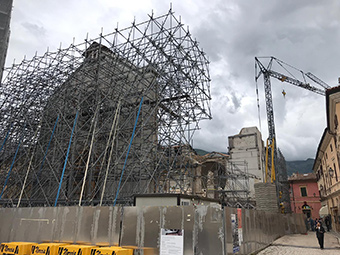 " The reconstruction, repair and renovation of the Basilica, which is an artistic and historical monument, should restore its function as a place of worship which will continue to serve as a meeting point for the local community, and as a house of welcome, rest and prayer for pilgrims from throughout the world. "

The rebuilt structure will be more resistant to earthquakes than the previous one, and its functioning and accessibility will be enhanced. The layout will be optimised to make best use of the available space and eliminate barriers to all parts of the building used for public events.

Energy savings will be achieved through the deployment of innovative, cost-effective and efficient solutions, particularly for air conditioning and lighting.

The Basilica is to be restored in a way that preserves the original architectural configuration and highlights the forms of culture and identity which it was designed to express. Given its unique characteristics and complexity, a strategy has been developed to ensure that the chosen proposal adheres to clearly defined methodological and technical specifications. The local community has been involved in the process, collecting video and photographic documentation to support the reconstruction.

Work will be carried out to facilitate inspection of the principal structural elements and the air conditioning and lighting. A remote monitoring system is to be set up for the continuous acquisition of data on structural and environmental factors and use of the building.

During construction, the public spaces adjacent to the Basilica will remain open. Above all, this means that Norcia’s weekly market will continue to be held in St. Benedict’s square. The project provides for a degree of access to parts of the construction site, albeit only at certain times, to allow important religious and civil events to take place.

A series of quakes

Born at Norcia in around 480 AD, St. Benedict is the patron saint of Europe and widely regarded as the founder of Christian monastic life in the West. The Basilica which bears his name dates from the late 14th century and, owing to its link with Benedict, became an important symbol of European monasticism.

The earthquake that destroyed it was the last in a series of three which hit central Italy in October 2016. Measuring 6.6 on the moment magnitude scale and with its epicentre around 6 km north of Norcia, it was the strongest seismic event in Italy since the November 1980 Irpinia earthquake in the south of the country.

It followed the quake of 24 August 2016 near the borders between the Umbria, Lazio, Abruzzo and Marche regions, which caused almost 300 deaths. Four more major earthquakes subsequently struck the same area on 18 January 2017, leading to 34 fatalities.

It is hoped that the reconstruction of the Basilica will help Norcia and the region of Umbria recover from the effects of these natural disasters. Restarting the activities that have traditionally taken place in and around the Basilica and restoring the building to its status as a symbol for the global Benedictine monastic order should play an important part in this.

Total investment for the project “Restoration of the Basilica of Norcia damaged by the earthquake of 2016” is EUR 10 000 000, with the EU’s European Regional Development Fund contributing EUR 5 000 000 through the “Umbria” Operational Programme for the 2014-2020 programming period. The investment falls under the priority “Climate change and risk prevention”.