EU funding has supported the transformation of the historic Apple Market in Waterford City, in the south-east of Ireland, into a contemporary urban quarter. Covering the site is the centrepiece of the regeneration – a 1 400 m², 9 m-high, triangular glass and steel canopy, part of which was made using a locally developed reflective material to create a mirrored ceiling effect. 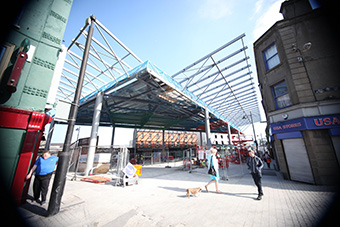 " The Apple Market regeneration has given an historic and fondly remembered area a new lease of life and a prominent role in the future of Waterford City. "

Along with the construction of the canopy, the project involved the repaving, with high-quality Portuguese granite and Leinster limestone, around 1 km of city centre streets and squares. These included Lady Lane, Colbeck Street, Michael Street, Arundel Square, John Street and the Apple Market itself.

Further features of the work involved establishing one-way traffic flow, installing rising bollards to ensure pedestrian-only access to certain zones during the day, removal of all kerbs and steps and public lighting upgrades.

A place for buying and selling fruit and vegetables in the 18th century, today the Apple Market is at the heart of Waterford’s entertainment district and is home to some of the city’s best bars and restaurants. However, prior to its transformation, it had lost its role as a meeting and trading point and had become a cluttered thoroughfare for vehicles. Many drivers used it as a rat run to avoid congestion on main roads.

Additional challenges which the regeneration was intended to address included a general decline in footfall and the large numbers of cars parked on city centre streets. Limiting vehicle access and giving priority to pedestrians were among the main goals of the project.

In developing the EUR 1.2 million canopy, the needs of nearby businesses were taken into account, and Waterford residents were informed about the motivation behind the project. They were told about how it would revitalise the Apple Market and its surroundings.

A safe and vibrant area

Perched on top of nine steel columns positioned to allow essential motorised traffic to enter and leave the area, the canopy has created a covered outdoor space that visitors can enjoy at all times of the day, whatever the weather.

This space serves as a year-round venue for a variety of community activities, such as concerts, street theatre performances, markets, outdoor film screenings, Christmas and food festivals and sporting contests. Combined with the aesthetic improvements to the surrounding streets, such activities help to attract residents to the city centre and benefit the cafés and bars around the edge of the Apple Market, which are now able to provide more outdoor seating.
Benefits have also come from the reduction in volumes of traffic, particularly through traffic. This has made the Apple Market safer for pedestrians and cyclists and facilitated access and egress, thereby contributing to increases in cycling, daytime and night-time footfall and public transport use.

To ensure that the area continues to thrive, an Apple Market trust has been set up. It brings together local businesses to brand, promote and stage events in Waterford’s new public space.

Total investment for the project “The Apple Market Waterford” is EUR 7 224 789, with the EU’s European Regional Development Fund contributing EUR 3 612 394 through the “Southern & Eastern” Operational Programme for the 2014-2020 programming period. The investment falls under the priority “Integrated urban development”.

Southern And Eastern View programmes for this region