Five partners from the cross-border area of Croatia and Bosnia and Herzegovina worked together to introduce a new tourist offer based on the region’s collective intangible cultural heritage. 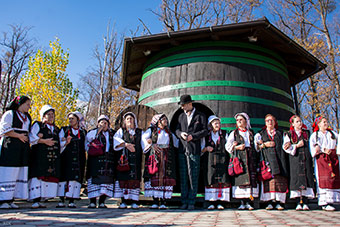 The Becharac and Ganga project set up a cultural tourist route based on two regional folk songs from Croatia and Bosnia and Herzegovina. ©Ministry of Regional Development and EU funds of the Republic of Croatia

" Despite differences in the cultural heritage of Croatia and Bosnia and Herzegovina, we looked for partners across borders because we saw a mutual benefit in revitalising our local traditions. The partnership between Pleternica and Tomislavgrad started by looking at different cultural manifestations in Croatia and Bosnia and Herzegovina as a way to promote destinations and the cultural history behind them. Our idea was to create recognisable tourist facilities which would reflect the cultural importance of bećarac and ganga for the local community, and at the same time speak of its significance to tourists visiting the region. "

The towns of Pleternica in Croatia and Tomislavgrad in Bosnia and Herzegovina set up a cultural tourist route based on two regional folk songs protected by UNESCO as intangible cultural heritage: Becharac and Ganga. They are linked to the regions of Slavonia in Croatia and Duvno and Livno in western Herzegovina, respectively.

The project’s efforts have led to the revival and promotion of the region’s cultural heritage and boosted tourism and services in both towns and the surrounding area.

Both towns have a long history with the two folk songs. The connection between the song Becharac and Pleternica, on the one hand, and Ganga and Tomislavgrad, on the other, have led to the construction and inauguration of two new town squares, each named after the song associated with the town.

The project led to the renovation of two museums, also respectively dedicated in name to the two songs, to increase cross-border tourism services in the region. The names of the Becharac Museum in Pleternica and Ganga Museum in Tomislavgrad have been protected as intellectual property, to emphasise the value of the folk songs to the region. The improved and better-equipped facilities have made both towns and the entire region more attractive for tourism.

Where the two towns were already associated by their shared cultural heritage, they are now connected by a physical tourist infrastructure. The creation of the cultural route of Becharac and Ganga is preserving and promoting traditional values in the form of music, dance, games, rituals and customs that characterise the region. Along the route, tourist checkpoints have been set up bearing a similar visual identity and common brand to establish a permanent and sustainable cross-border tourist network.

Training the cultural managers of tomorrow

To adequately manage and sustain this new tourist offer, the project has published strategic studies on how to further develop the region’s tourism and provide guidance to those responsible. What’s more, in collaboration with its partners, the project set up two tourist management education courses, focusing on destination management and rural development and tourism. Over 20 people followed the training program to gain the knowledge and skills to guarantee the sustainability of the region’s new tourist offer.

Both towns have organised cultural manifestations in the context of the project. A monograph on the cultural heritage of Becharac and Ganga has been published, in addition to several cookbooks with traditional recipes. Local tourist attractions and structures such as small family farms, local producers and cultural associations have benefitted from the project’s efforts.

Total investment for the project “Becharac & Ganga - Cultural route of Becharac & Ganga” is EUR 2 307 174, with the EU’s European Regional Development Fund and Instrument for Pre-Accession Assistance II contributing EUR 1 961 098 through the Interreg IPA CBC Programme Croatia-Bosnia and Herzegovina-Montenegro 2014-2020. The investment falls under the priority “Jobs, Growth and Investment”.