Commission welcomes the political agreement on the Just Transition Fund 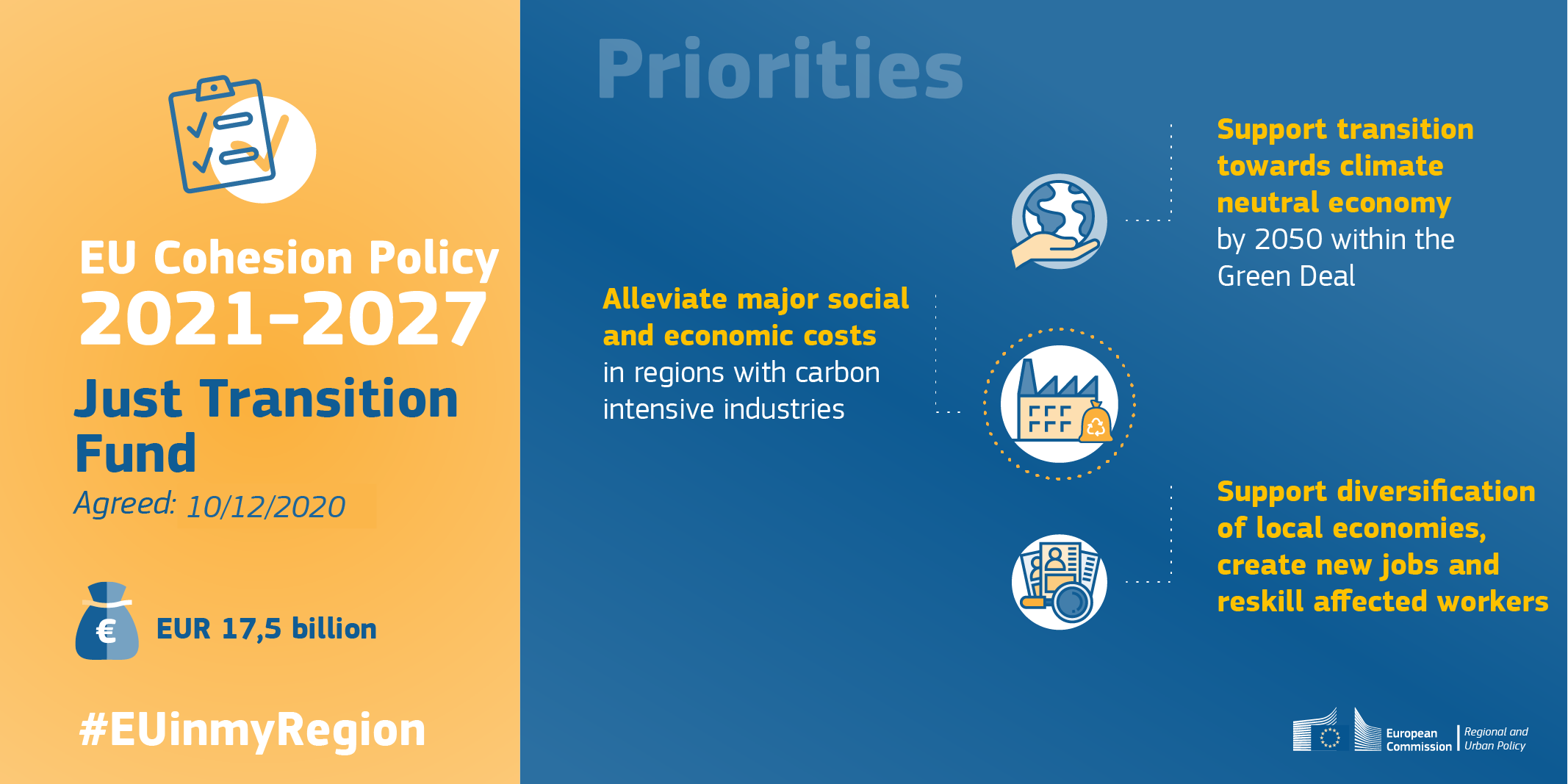 Commissioner for Cohesion and Reforms, Elisa Ferreira, said: “The green transition will only be successful if everyone benefits from it. The Just Transition Fund will actively support the changes leading to a thriving and socially fair climate-neutral economy. The Just Transition Fund is a crucial instrument for the delivery of the European Green Deal. It is also at the heart of cohesion policy's mission to make sure that no one is left behind, while we progress towards a greener and more competitive Europe.”

The Just Transition Fund is a new instrument with an overall budget of €17.5 billion, of which €7.5 billion are coming from the Multiannual Financial Framework (MFF) and €10 billion from the NextGenerationEU. The JTF is a key element of the European Green Deal and the first pillar of the Just Transition Mechanism (JTM). It aims to alleviate the social and economic costs resulting from the transition towards a climate-neutral economy, through a wide range of activities directed mainly at diversifying the economic activity and helping people adapt in a changing labour market.

The main elements of the compromise include:

On 10 November 2020, a political agreement was reached between the European Parliament, EU Member States in the Council as well as the Commission on the next long-term EU budget and NextGenerationEU. As a next step, the legal adoption of the MFF package along with the ratification of the Own Resources Decision is now urgently needed.

Once adopted, the EU's long-term budget, coupled with the NextGenerationEU initiative, which is a temporary instrument designed to drive the recovery of Europe, will be the largest stimulus package ever financed through the EU budget. A total of €1.8 trillion (in 2018 prices) will help rebuild a post-COVID-19 Europe. It will be a greener, more digital and more resilient Europe.

As a result of the political trilogues, in order to unlock funding from the JTF, EU countries will have to prepare their Territorial Just Transition Plans (TJTPs) identifying the eligible territories that are expected to be the most negatively impacted by the green transition. The preparation of the TJTPs is a key condition for programming and subsequently implementing JTF resources. Each Member State will prepare them together with the relevant internal partners, in dialogue with the Commission, and by ensuring they are consistent with the smart specialisation strategies and the National Energy and Climate Plans. The Commission will adopt the plans together with the programmes entailing JTF support.

The Just Transition Fund is one of the three pillars of the Just Transition Mechanism (JTM) which is part of the European Green Deal to create a climate-neutral economy in Europe by 2050. The JTF was proposed by the Commission on 14 January 2020. Following the Commission's proposals on 27 May 2020 Recovery Package and the July European Council agreement, its budget has been strengthened. The other two pillars of the JTM are a dedicated just transition scheme under InvestEU and a public sector loan facility, combining EU grant support and European Investment Bank loans.