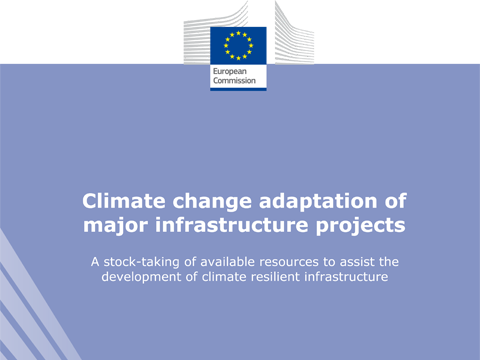 Climate change fares high on the European Union agenda, Commission and Member States all working on rapidly progressing on the subject matter, be that monetary or non-monetary policy instruments, developed and implemented individually or collectively. In this context, at the end of 2016 DG REGIO commissioned a study on mapping the information availability for climate change adaptation in the 28 Member States of the EU that could facilitate the assessment of climate change aspects at project level (mostly for major projects but not exclusively) for ERDF/CF funding in 2014-2020 period.

In order to fully tap into the information available in all 28 MS the study did not focus exclusively on major projects, and excluded qualified conclusions and recommendations. Instead, it focussed on presenting a stock-taking of available resources to assist the development of climate resilient infrastructures following 7 study criteria (data availability; guidance; methodologies; tools; design standards; system and legal framework; institutional capacity) and covering the transport, broadband, urban development, energy, water and waste sectors.

The identified resources are non-exhaustive and present a snapshot of the readily available and accessible material during 2017. This information was collected through finite web-based desk research, and through questionnaires and interviews aimed at the relevant national competent authorities (managing authorities, research institutes, ministry officials, etc.). Further resources might be available but not accessible due to privacy restrictions, or a lack of mandate to share related material.

The study's final report is structured on two main parts: one general and one on country reports which include also project examples. The study shows there is large number of resources related to climate change adaptation available to infrastructure project developers, while at the same time there are a number of areas where further resources could be made more accessible.